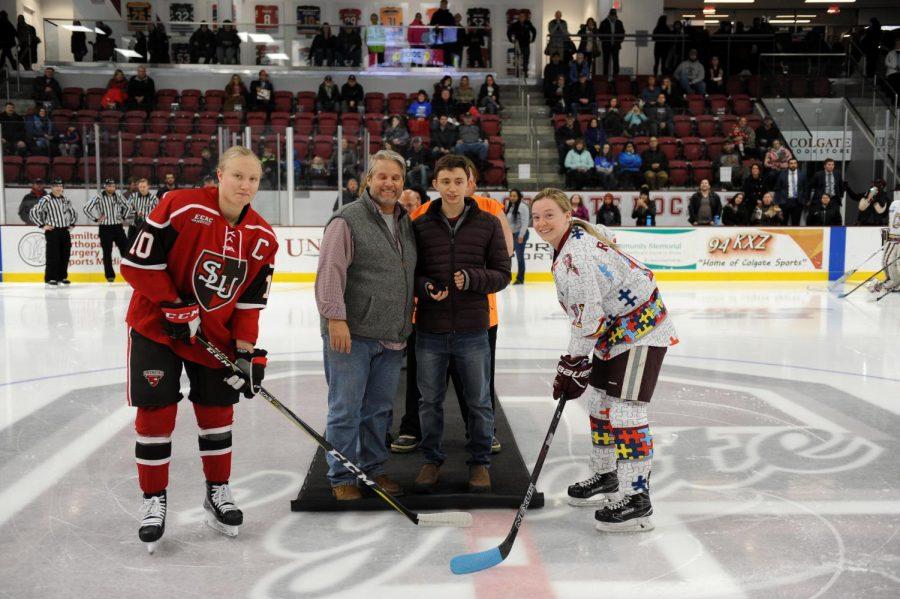 Some of the Colgate Athletic Program’s most time-honored and respectable traditions are its Autism-, Down syndrome- and Alzheimer’s-Awareness games. The Autism-Awareness initiative started about seven years ago when the Colgate women’s hockey team decided to raise awareness to honor the team’s manager Kati Williams, a then-16-year-old Norwich student with Asperger’s, an autism spectrum disorder. Starting in 2011, the team wore custom jerseys stitched with puzzle pieces, a prominent symbol representing the spectrum of autism disorders.

Since then, many of Colgate’s sports programs have adopted the tradition, dedicating a home game each year to raising awareness about an array of medical issues. The hockey team held its annual Autism-Awareness game this year in early February against Saint Lawrence. All proceeds from the game went toward the CNY Quest as well as ADHD & Autism Psychological Services and Advocacy (AAPSA), an organization that specializes in assessment and treatment of neurodevelopmental disorders including ADHD and Autism. As of 2015, the women’s hockey program had raised above $33,000 to help children with autism, an accomplishment that should make the program and the entire Colgate Athletics Department extremely proud.

Along with other teams, the men’s basketball program has followed in the footsteps of the women’s hockey team in initiating fundraising efforts to go towards a worthy cause. In a February contest against Holy Cross, the team held its annual Alzheimer’s-Awareness game. All ticket and concession sales were donated to the Alzheimer’s Association, which has been conducting research to end Alzheimer’s and dementia since the early 1990s.

The men’s soccer team has chosen to inspire action and put fundraising efforts toward another worthy cause. The team has formed a long-lasting bond with Pathfinder Village, a community for people with Down syndrome and other developmental disabilities. The young men and women at Pathfinder have been some of Colgate’s biggest fans for years, not just of the soccer program but of all of Colgate’s sports teams.

The soccer team sees its relationship with Pathfinder Village as one that benefits them tremendously, as the humility and support that they have provided throughout the years has been a major source of support for the program. These types of initiatives are among the university’s sports teams’ proudest traditions.