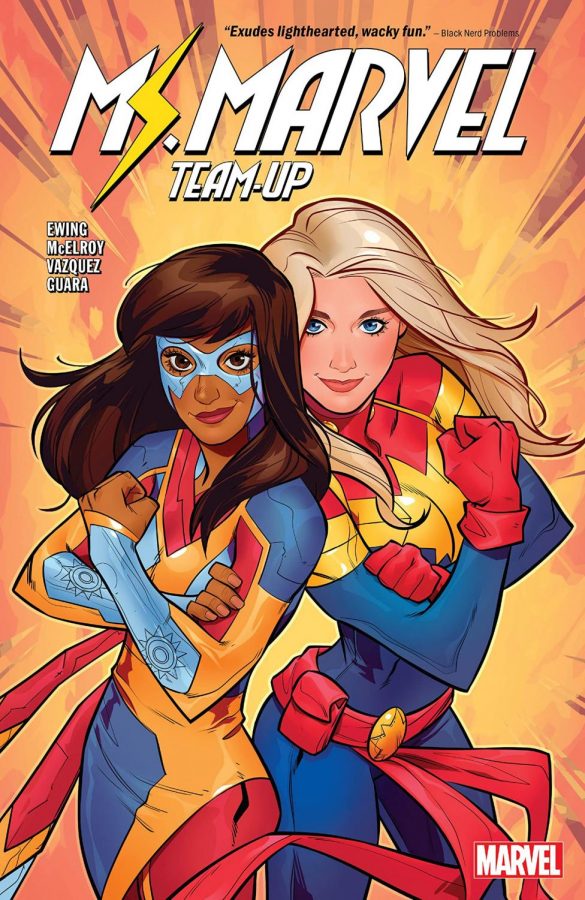 Organized by Mabel Dart Colegrove Commons (Dart Colegrove), the Identity and Representation in comics weekly discussion group offers a chance for students to explore comics in a different light. Marie Pugliese, the Residential Fellow for Dart Colegrove, worked with Professor of LGBTQ+ Studies Paul Humphrey to create bi-weekly Zoom sessions where students can feel comfortable discussing important and challenging issues. While most students belong to the Commons, the group is open to everyone, and students can earn PE credit by participating. For Pugliese, community is everything.

“We wanted to have these forums, thinking about engaging students during this mostly virtual semester. We thought about ways to engage them, and we wanted to connect it to some intellectually engaging material. So, we came up with the idea to have these discussion groups, but connect it to PE classes to involve more students,” Pugliese shared.

Students read a different comic ahead of every session and come prepared to discuss a few questions in a book club-like environment. Comics offer students a chance to examine important questions about representation in literature and popular culture. Humphrey deliberately chose comics that represented unique perspectives on contemporary issues, such as “Black Panther,” which includes the Wakanda universe and Harriet Tubman as a superhero.

Humphrey came up with the idea for the group when thinking about the political environment and how to engage students outside of the classroom.

“The idea came from thinking about how we can engage with the current political climate, so [the group can have] a discussion about race, politics, gender and sexuality because those are topics that are often difficult to talk about with students. Sometimes, they are pushed aside in an academic context,” Humphrey recalled.

He also wanted to find a creative virtual way to bring students of the Commons together, especially since not everyone is back on the hill this semester.

“[The goal is] creating community, but also outside of that, we have students who were not able to come back to campus, and this allows them to engage with their peers in a community setting,” Humphrey added.

This past week, the group focused on the comic “Ms. Marvel,” a relatively new story in the Marvel canon that features a Muslim female protagonist. Students started the hour-long Zoom session by sharing stories on how they became interested in comics and graphic novels. Many talked about family influences or how they have always enjoyed the striking images and art that make up comic books. Others mentioned the impact and influence that comic brands such as Marvel and DC have had on pop culture. Some students had not even read comics before starting the group, but wanted a space to openly talk about important issues in a unique context.

“My grandpa has been collecting comics since he was a kid, so he has the first editions of a lot of the major comics. He draws a lot and comes up with his own characters and stories, so he’s taught me a lot about the creation of comic art and fonts, which is cool, too. We’ll talk for hours about his favorite comic book issues like Master of Kung Fu and Conan, and I’ll show him my favorite comic shows like The Umbrella Academy and Daredevil,” Ridge Williams said.

Building on the idea of engaging with comics as a subject of interest, Humphrey shared his thoughts on the function of comics today.

“Comics often get called out as this space for pure entertainment, but engaging them in this intellectual way and analyzing it… [allows them to become] a way to talk about these issues. [We are] engaging in popular culture, in a way that is entertaining but intellectual,” Humphrey said.

Students discussed how many comics only include white male protagonists as superheroes or female superheroes who are often sexualized. “Ms. Marvel” provides a look at how stereotypes are integrated into comics while putting an ironic twist on traditional Muslim representation, involving a character who grapples with the difficulties of growing up as a Muslim woman in America. The group also discussed the comic’s illustrations and how the softer art appears almost like fan-art, representing the comic’s inclusivity. While Ridge Williams took the class for her PE credit, she ultimately found the discussion interesting.

“It’s great to see people who are new to the comic book world, and their first introduction is this class, which focuses on representation and has heavy themes based on identity. It’s fun to talk about comics for an hour with people my age because our language and values are different from what I’m used to,” Williams said.

Pugliese hopes to work with other faculty members this semester for more discussion groups after the success of the comics discussion group. The unique virtual format creates a way to mix the classroom experience with the social experience of college, and what better way to do it than with comics.