From Faculty Wives to Faculty: Women’s History on Campus 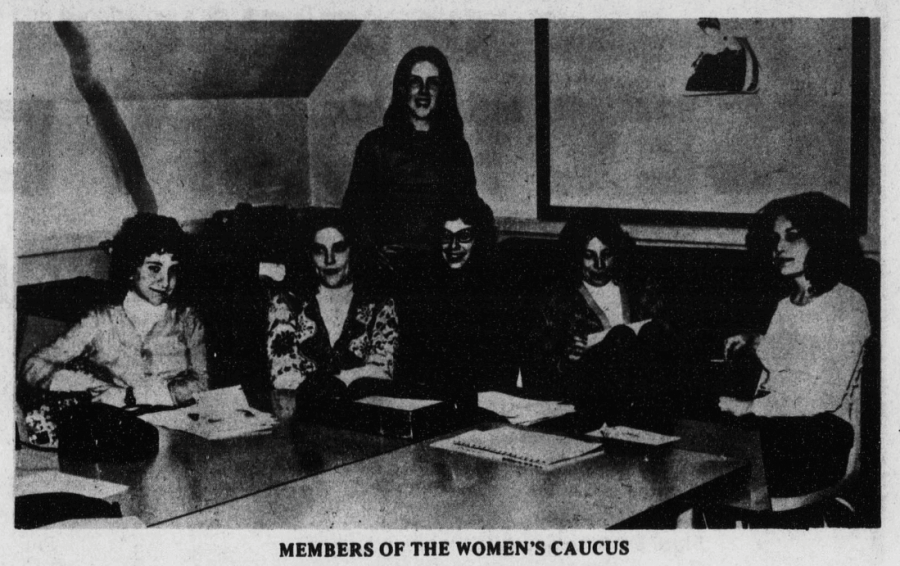 Members of the Women’s Caucus gathered in 1975 to organize the activities,  events and speakers for the women’s festival.

The Colgate Maroon-News’ coverage of women on campus has increased dramatically over the past 150 years – largely, because women weren’t hired as professors until 1962 or admitted as students until 1970. The process of creating a Women’s Studies major and minor was convoluted and long-winded, involving educational Women’s Festivals, the first sorority’s implementation, a Co-education Committee and eventually an inclusive LGBTQ+ agenda. Here’s how the process unfolded, according to our writers from the past.

In 1846, Gavin Richie, the first editor of what was then known as the Hamilton Student, was expelled for writing an editorial advocating for equal rights and suffrage. His progressive mindset, one centered around equality, was met by an acerbic attitude from the faculty that somewhat defined Colgate’s relationship toward women, people of color, and individuals on the LGBTQ+ spectrum in the 19th century. His words, however, demonstrate the initiation of a debate for an inclusive campus.

In a 1966 article titled “Is Coeducation Best for Colgate?” the formation of an official Co-education Committee was established and discussed at length. While this marked a motion toward having women on campus, the article states that “the history of the debate and deliberation this committee inherits is at least 50 years old.” Ironically, one of the arguments put forth for the value of a coeducational college discussed the benefits to men. Concerns over the complications to men’s social lives and newly distracted states were countered with the question, “If these are supposed to be the formative years of a man’s intellectual life, why do we provide an artificial environment for the process?”

Ultimately, the environment began to shift. Female professors came before students, but when such professors were first hired, evident discrimination remained. Initially, they were only hired as part-time faculty and had no opportunity to acquire tenure. Thomas A. Bartlett Chair and Professor of English, Emerita Jane Pinchin was hired in 1965 as the first full-time female professor, and she later went on to work with the Co-educational Committee, making it possible for female students to attend Colgate.

The committee sought to resolve issues of newly needed infrastructure to bring women to Hamilton. Restrooms, dorms, medical facilities and support programs all needed establishing before female applications could be accepted, and an anti-coed mindset widespread among faculty and the student body alike proved equally in need of change.

In 1970, the first female students were enrolled. Once admitted, however, these women still faced unfair practices. Only 600 of them were admitted annually despite this leading to the exclusion of highly qualified candidates, according to a 1972 article entitled “Are Women Ready for the Challenges of Society?” The article went on to document the prejudiced classroom situations, with professors often treating women paternalistically or condescendingly. Interestingly, women at this time balanced their participation in the women’s committee and the role they held in shaping women’s role on campus with a continued prioritization of becoming wives and mothers and being satisfied “with the prospect of being a housewife.”

In 1976, the Bolton House was formed as a women’s living environment to provide a safe and proactive space for women. In 1978, the residents of this house changed the name of the Colgate Women’s Center to the Women’s Coalition as they were “afraid of the feminist label.” Roughly fifty faculty members and students worked to resolve women’s issues despite “no open support from Colgate’s male faculty,” due to the “many sexist professors,” according to 1978 coalition coordinator Beth Kohnen.

A large part of the move towards making Colgate inclusive came through events, education, and active participation from the Colgate community. The first sorority, Delta Nu, formed in 1979, the first Women’s Studies course (Women in the Anglo-American Tradition) was first taught in 1980, and a women’s resource center was formed in Cutten with eight trained rape counselors in 1981. In the 1980’s Women’s Roundtables were held weekly to discuss women’s issues on topics such as “Fear of Feminism.” Today, this can be seen in the Brown Bag lunches held in the Center for Women’s Studies on Tuesday afternoons.

One major event of 1973, just one year before the first coeducational class graduated, was an extensive women’s festival. The festival was a week-long endeavor, including art shows, socio-political talks, consciousness-raising events, career workshops and an all-female band. Along with more serious events, such as a women-only speech on rape, sessions on car mechanics, sports and assertiveness training (evidently involving role playing activities to help women become more “self-sufficient and aggressive”) also took place. Additionally, talks on women in the third-world, herbal medicine and travelling alone completed an inclusive week meant to help initiate women into the Colgate community.

In 1983, the WMST minor was  formed with support from The Colgate Maroon Editorial Staff which wrote, “[A Women’s Studies program] is essential to recognize the presence of women academically at Colgate,” and just a few years later the Bolton house was renamed the WMST theme house. In 1990, WMST became an official major and four years later the East Hall basement was renovated as the Center for Women’s Studies.

The center, which continues to grow in course variety and faculty members, also includes an Office of LGBTQ Initiative as of 2009. LGBTQ studies became an accredited minor that same year. In recent decades, coverage of Women’s Studies involved speakers at Queerfest, “Black Identities” Brown Bags, events such as ALANApalooza and a generally more inclusive range of campus happenings.

With an ever-growing curriculum of Women’s Studies classes, professionals, and interested students, Colgate’s efforts to provide an inclusive space has come a long way from the expulsion worthy remarks of Ritchie: “How lamentable, too, the record which the future historian of our country will be compelled, through a love of truth, to make, of the state of public opinion in New York in the fall of 1846!”