Living Writers Features Emily Bernard for “Black is the Body” 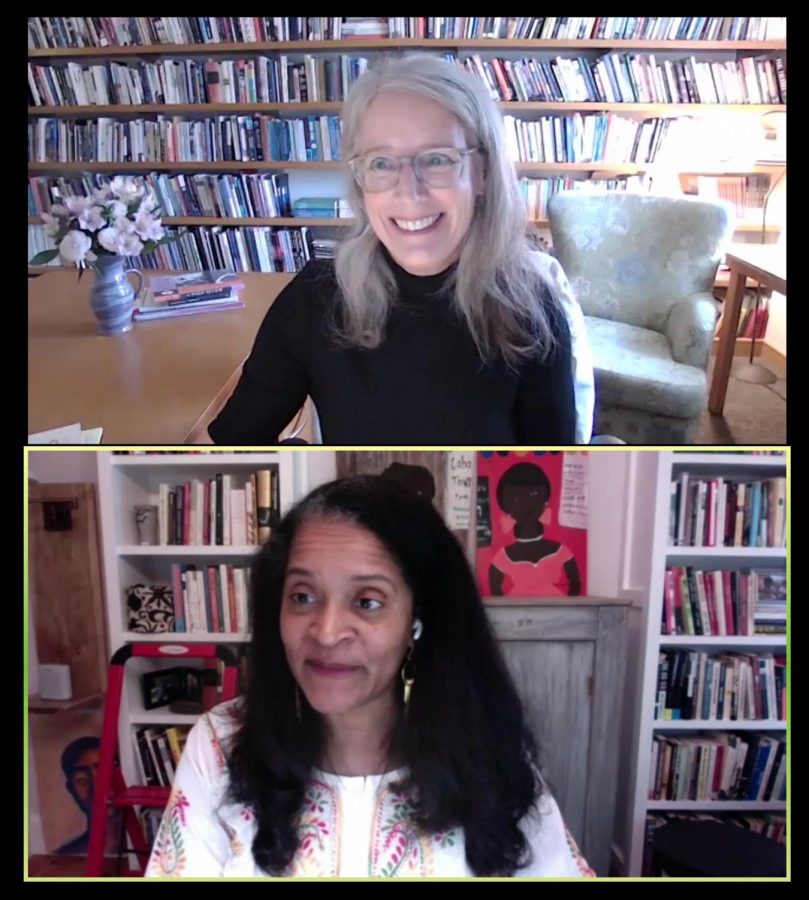 Students, faculty and alumni joined author Emily Bernard on Thursday, Sept. 17 for the second Living Writers event of the semester. As part of the English department’s annual series, the University of Vermont English Professor and Yale PhD recipient gave a presentation centered around her 2019 book Black is the Body.

The event began with an introduction by Associate Professor of English and Living Writers professor Jennifer Brice, who sang Bernard’s praises and conveyed widespread admiration for the writer. The book is a collection of 12 essays reflecting on different aspects of her life, including motherhood, race, family, home and identity.

“Black is the Body hones in on the inflection points of Mrs. Bernard’s life: a violent and unprovoked knife attack in a coffee shop, that time she brought her white fiancé home to meet her family, her journey to adopting twin daughters from Ethiopia,” Brice said.

Bernard began her presentation by reading excerpts from three different essays in Black is the Body; first from “Beginnings,” the book’s introduction, then “Skin,” an exploration into race and skin color, and finally “Motherland,” the story of traveling to Ethiopia to adopt her daughters. The passages spoke to Bernard’s affinity for deeply personal storytelling, exploring the contradictions within her own life and complex relationships with others.

“Blackness is an art, not a science,” Bernard read. “It is a paradox: intangible and visceral; a situation and a story… in its inherent contradictions, utter mysteries, and bottomlessness as a reservoir of narratives, race is the story of my life, and therefore black is the body of this book.”

As the discussion opened up to the audience for questions, the conversation turned to Bernard’s philosophy around her writing.

“We learn so much from when we fail, and when we make mistakes,” she said. “This book is not meant to be instructive in any way. I am a human being, and I cherish that. I love being surprised in life; I love being wrong. I return to writing because I don’t know everything, and I don’t trust writers who pretend they know everything. The experiences that are useful to me are experiences I can learn from.”

As many of the book’s essays explore race, Bernard acknowledged the weight she carries as a Black intellectual, and how her consciousness of this fact translates differently to her writing than in the classroom. Her students are largely unacquainted with African-American literature, she said, and she is the only black adult to which some of them have ever talked, a fact rendering her very aware of how she presents herself in these situations. Conversely, she highlighted the relative freedom she feels in her writing, something she took to heart as she crafted this book.

“This book was conceived as a refusal,” she said. “On the page I am fearless. That is a space where I can be fearless. In life, I can be very carefully composed to the point of putting on my own straight-jacket, but on the page, I can wander, I can be natural, I can contradict myself and I can be vulnerable.”

Other questions revolved around Bernard’s family, and how she approaches writing such deeply personal pieces that involve people close to her. This discussion was enriched by a seemingly accidental cameo by one of her daughters on Zoom, an appearance prompting a loving eye-roll from the writer and delight from Professor Brice.

Bernard wrapped up the presentation by acknowledging how writing is somewhat of a healing process for her, as evidenced in the passages she read aloud that dug into particularly difficult memories. She quoted another author’s words on why one ought to write:

“‘Somewhere out there, there’s someone out there with wounds in the shape of your wounds.’ We’re trying to help heal the wounds of the world,” Bernard said.