Love in the Time of Covid: Eva Wiener and Josh Dau 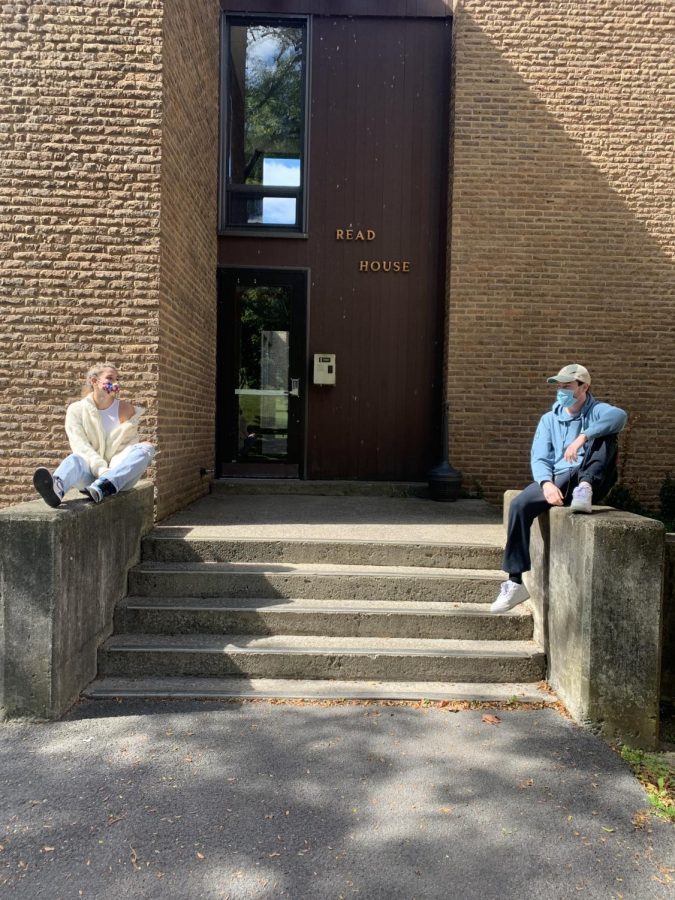 For couples on campus this semester, Covid-19 poses both a threat to love as well as an opportunity to strengthen relationships through the unique challenges and restrictions imposed on the community.

For sophomores Eva Wiener and Josh Dau, the pandemic has stretched their limits as a couple, but in some ways, also brought them closer together. Both from Los Angeles, Wiener is on the pre-med track and involved with the Southern Madison County Volunteer Ambulance Corps (SOMAC) and Dau plans to concentrate in economics and is involved with the Thought Into Action (TIA) entrepreneurship program.

Their relationship began early in their time at Colgate, budding in their first week on campus during an orientation event.

“On the first night, we met at the carnival. We were introduced by a mutual friend and then we just started talking forever for like an hour out there in the field,” Dau said.

“It was just one of those things where we knew so many people in common and just really connected, and it was comforting to meet someone who was from the same city,” Wiener added. “It was honestly a perfect night and just felt really natural. Both of us weren’t really fans of hookup culture and wanted to get away from that coming to college.”

Despite the restrictions on campus, Dau and Wiener have found creative ways to stay connected while maintaining social distancing guidelines with their favorite date: “RIG Nights.”

“We went to [Royal India Grill] probably at least once a week all of last year. It was just our absolute favorite so it’s a really big bonding activity. We both love food and really connect over it,” Wiener said. “During the first two weeks when we couldn’t actually see each other at all we … FaceTimed and ate together, which was really sweet.”

Both at home in L.A. for the summer, Wiener and Dau cherished their time together.

Despite spending the summer together, the two-week quarantine presented new challenges for the relationship.

“Here it’s just really hard. During the first two weeks especially, we could see each other on Whitnall Field for two hours at a time, but we couldn’t get that physical intimacy, which I think is equally as important in a relationship as the emotional aspect, and that’s just been really, really difficult. Now that we can walk around whenever we want together it’s really nice [because] we’ve been spending so much more time together. I really miss just being able to hold hands and just do simple things like that,” Wiener said.

The on-campus regulations have been a learning curve for both Wiener and Dau.

“At first it was really hard because I feel like you end up getting really angry that you can’t touch the person and you can just see them, and that’s almost worse. It is so weird being able to see the person you love and not really be able to interact with them, and it makes them feel a lot more like a friend than someone you’re in a relationship with,” Wiener said. “We’ve just had to work on the emotional aspect and making that the most important part of our relationship right now, which I think is really good.”

Despite these challenges, Dau and Wiener said the pandemic has also had positive impacts on their relationship.

“We’ve really strengthened the emotional side [of our relationship] just by talking because we haven’t been able to hold hands or hug for the last month, and it’s kinda gonna stay that way for the rest of the semester. But we’ll work through it and figure it out [and] make the best of it,” Dau said.

The pair have decided that community safety comes first right now, but are doing what they can to maintain their emotional and intimate connection.

“We want to have a successful semester, and it would be really huge if we didn’t get sent home this semester for national news and Colgate’s reputation. I want that for the school so I’m willing to follow all the rules,” Dau said.