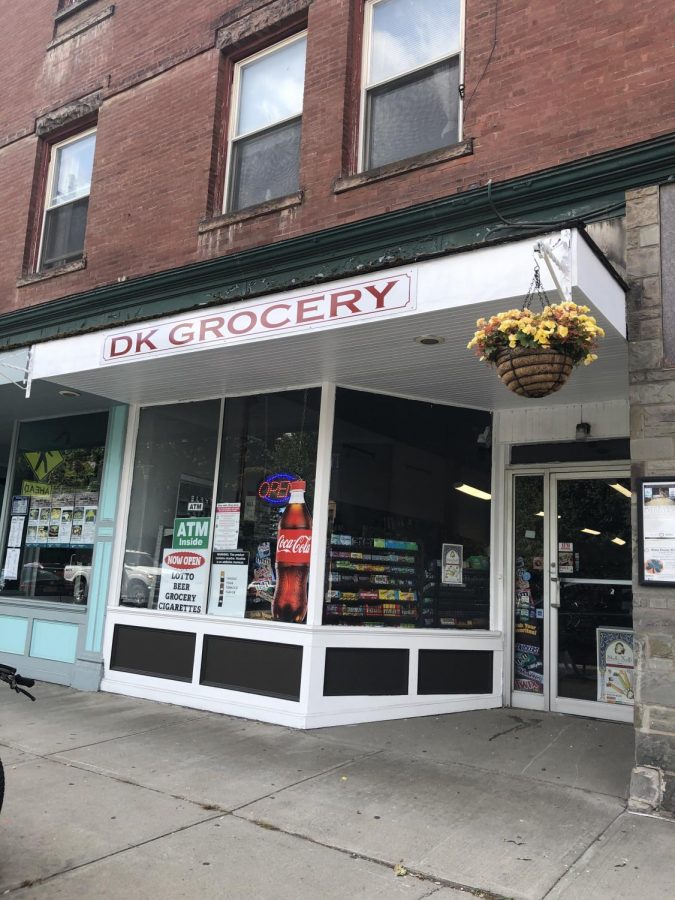 Working with the Partnership for Community Development (PCD) of Hamilton, a new convenience store called DK Grocery opened on Saturday, Aug. 15, a little over a week before Colgate students returned to campus for the Fall 2020 semester.

Owner and manager Raj Kumar said that he is accustomed to working in the restaurant business but felt that a small-scale grocery store would fill a hole in the downtown Hamilton community. One reason he cited for opening the store was that he heard students complain about having to walk far to get household staples such as “milk and spices, and ready-to-eat food,” Kumar said. Kumar also hopes to provide students with a variety of food options not available at Price Chopper, such as Indian spices, various flavors of Indian ice cream and different rice varieties.

Senior Billy Garfinkel lives above DK Grocery, which is located on Broad Street between the Broad Street Diner and Royal Indian Grill, and frequents the store a few times a week, usually for household staples such as sugar, dish soap and vinegar.

“It beats a whole trip to the Price Chopper or Big Lots for a few items,” Garfinkel said. “I think DK Grocery is a good addition to downtown Hamilton. In many ways, it caters to the needs of students well by providing a place to grab a drink or snack to those who may need to go frequent downtown more often to attend in-person class. The store also serves the downtown residential community well as a spot to pick up convenience store items in a remarkable pinch.”

Senior Morgan van Kesteren expressed similar sentiments, adding that students without cars have to rely on friends to drive them to relatively remote locations like Price Chopper, Big Lots or Kinney’s for everyday items.

“I do think that Hamilton needed a bodega style store, especially for those of us at Colgate without cars,” van Kesteren said. “DK Grocery seems to have similar items to the C Store but at a cheaper price. I think that DK Grocery adds more variety to the restaurants and shops in town.”

However, not all seniors feel the same way. Senior James Hearn, who lives off-campus, said he was surprised at hearing about DK Grocery opening.

“I didn’t think a bodega was something that would open in Hamilton. Being totally honest, I think a new restaurant would have been more beneficial for the town,” Hearn said.

Kumar explained that there is a lack of South Asian spices readily available for the student community, and if students “need to [purchase them] they go to Syracuse or Utica.”

Garfinkel said he enjoys cooking different types of dishes with a variety of spices and has already bought and used spices from the store.

“As a matter of fact, I bought some more cumin seeds there the other day. I cook frequently with many spices so I was thrilled to see the store offers some spices to buy in bulk when I first walked in,” Garfinkel said. “They also carry a good variety of dried lentils, basmati rice, tea and incense.”

The store’s inventory is continuing to adapt to fit the needs of the student body. Kumar now offers a selection of microwavable foods in response to student requests. The requests continue to flow in, as senior Erin McCormack said she “wish[es] they sold more veggies and fruits” and Garfinkel would like them to sell yogurt. Kumar also recognized the need for delivery during the student quarantine, adding a continuous on-campus delivery option.

“When we open[ed], the students [were] asking for delivery and stuff, and [at] that time I [didn’t have] a delivery guy, but now I have one delivery guy,” Kumar said. “[It was] tough planning for that [during student quarantine], plus the distance [for delivering], but right now it’s okay.”

DK Grocery has several precautions in place to ensure the safety of its workers and customers during the COVID-19 pandemic. They have stickers posted around the store emphasizing the need for social distancing, and every worker has to “make sure to cover their face[s] all the time” and repeatedly sanitize. Additionally, only five to seven customers are allowed inside at a time.

Opening during the COVID-19 pandemic was challenging, Kumar said, as the store was not getting many customers.

“[We don’t have] many town customers for right now, mostly students,” Kumar said. “The [opening was] very slow because students [were] not here and [we were] planning to be making the money, and we lost [profit] for like 15, 20 days. Then, after students came, [we] start[ed] doing delivery so whatever they’re asking for, we [are] adding stuff.”

According to Kumar, the feedback from the community has been overwhelmingly positive and “everybody is very happy.”

“[Students are] missing [things like] kulfi ice cream a lot,” Kumar said. “So this kind of stuff is missing and we try to give some, give [a] different touch and maybe they like it and they come back.”