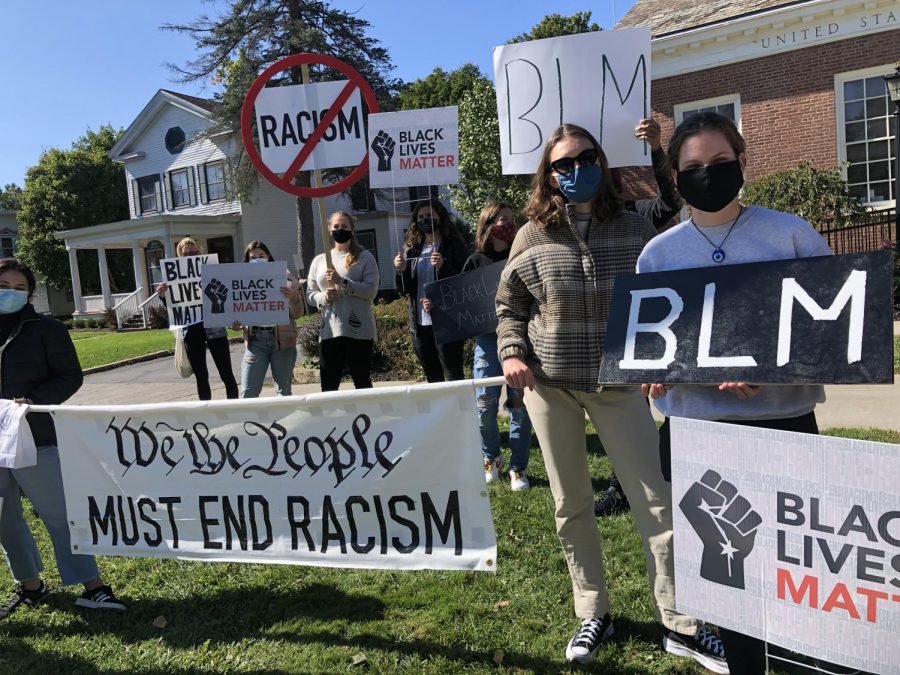 The Hamilton Area Anti-Racism Coalition (HAARC) is hosting weekly local protests in support of the Black Lives Matter movement. This Saturday marked the second of a series of protests starting Sept. 12 that will last until the November election.

After the Hamilton Interfaith Service Group led a series of dialogues on America’s divisions, participants John Bailey, Julie Carlson, Liz Crofut, Marian Abowitz and Cris Amann felt they needed to do more. In Spring 2018, they created the Hamilton Area Anti-Racism Coalition in an attempt to focus the conversation on white privilege.

“I guess we just sort-of ‘woke-up,’” Bailey said while recounting those first dialogues. “Our society is just so impregnated with white supremacy that we must keep saying, Black Lives Matter.”

Junior Sally McGee echoed Bailey’s sentiment about mobilizing activism in the town. After visiting the farmers market and stumbling across the first protest with fellow junior Larsen Klein, they decided to join.

“For me to see [the protest] and not go stand with them would feel like an act of ignorance and a gross misuse of privilege,” McGee said.

McGee, along with Klein and senior Genevieve McCarthy, decided that Colgate’s attendance at the first protest could be improved. Through social media and word-of-mouth, the three upperclassmen managed to mobilize an additional 30 students for this past Saturday’s protest.

HAARC’s primary goals are to disrupt white supremacy and build an equitable and just community through dialogue, action and education. In doing so, HAARC calls on fellow allies and activists to bring awareness to not only the systemic racism across our nation, but the everyday racism in Central New York.

“I mean, we live in a community where—we’re not New York City, we’re not Boston or Chicago—this is where the Confederate flags are,” Cleland said. “This is where we need to be the most vigilant about the safety and security of Black lives.”

“Even though people keep yelling back All Lives Matter, we must keep saying Black Lives Matter,” Bailey emphasized while reflecting on the protest’s opposition.

While some passersby honked and cheered, some shook their heads or instead chose to ignore the protest. But Bailey explained that achieving a variety of responses was the goal. HAARC wanted to pick a public space that would capture the greatest attention.

“We just have to change our society,” Bailey said.

In addition to Cleland, McGee touched on the importance of holding protests in a Central New York college town.

“The choice of location is really interesting because it shows who cares enough to stop…It’s sad to see people keep walking when they could stop and take a few moments of their time to show solidarity [Colgate students included],” McGee said. “It’s really weird to see some of your peers completely disregard a movement because they feel uncomfortable.”