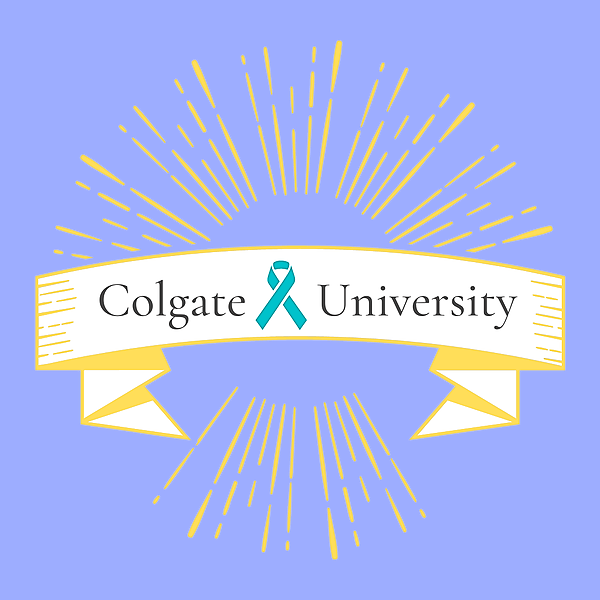 160 — that is the current number of stories received and shared by @shareyourstorycolgate*, an Instagram page that surfaced this past summer as a platform for survivors to share their experiences of sexual violence at Colgate and at home. The account’s co-creator junior Nicole Weiss, a psychology and Spanish double concentrator, has dedicated her Colgate career to activism surrounding sexual violence. She is a member of the Network, a Haven ambassador, Sexual Assault Prevention and Support (SAPAS) Chair for the Panhellenic Council and a member of the Medusa Movement. She created the account after interning at a sexual assault crisis center over the summer and, in doing so, has started a movement. With 160 stories shared and more than 1,000 followers, the message is clear: there is a problem at Colgate that urgently needs to be addressed, and Weiss is inspired to make that change happen.
The stories featured on @shareyourstorycolgate are visceral and detailed accounts that demand a response. Overwhelming feelings of distress and disappointment are common themes in the words shared.
“It’s definitely been one of the biggest wakeup calls since the founding of Haven,” junior Larsen Klein, a Bystander Intervention facilitator, SAPAS chair for Kappa Kappa Gamma and a member of the Medusa Movement said. “I feel like this is the virtual version of a Haven protest.”

Though it remains difficult to have these stories publicly available for many to read, it has certainly encouraged immense reflection and conversation among the student body.

“Now when I visualize [sexual assault on campus], it’s not a thing that occasionally happens,” junior Jack Underhill, a member of Phi Delta Theta and Outdoor Education, said. “It’s hard for me to not picture it having happened to every woman I see on campus and many men, too. Reading [the account] made it less abstract and significantly more concrete and more right here.”

The development of @shareyourstorycolgate did not come without controversy. Haven advised the account to remove identifiers of organizations on campus in an effort to protect the account from legal consequences. In following this advice, the account received backlash, with some claiming that removing identifies protected alleged perpetrators and silenced survivors — making their trauma worse.

“That was really hard for me because that was exactly the opposite of what I was trying to do,” Weiss said.

Though it was a difficult decision, the account was able to remain true to its goal of supporting the Colgate community to the best of its ability. Posting of stories has slowed, but Weiss seeks to keep the momentum of the account with Instagram story posts and continued conversation.

It is difficult to avoid the prevalence of mentions of Greek Life Organizations (GLOs) in many of the stories shared. Before identifiers were taken away, multiple fraternities on campus were explicitly mentioned.

“I’m glad they were named even for just a moment,” says Klein, “It was a quick little blast that 100% woke up all the organizations on campus because they were all named.”

For Underhill, this prompted him to think about his own organization.

“There are almost certainly things I don’t know about that have happened that I am associated with through being a part of that [organization],” Underhill said. “That’s so hard for me to sit with.”

Both Weiss and Klein have worked with the panhellenic council to make demands of the fraternities, using @shareyourstorycolgate as a motivating factor. The goals of these demands are transparency and accountability.

“I hope it does [create] some change,” Weiss said, “but it is hard to see now because of the situation we are [still] in.”

Though Underhill cannot speak for all fraternities, he recognizes that work is being done in Phi Delta Theta.

“Effort is being made to make [our organization] safer and try to actually not be part of the problem. But the reality is we are structurally situated in a legacy of gender-based power dynamics,” Underhill said. He also acknowledged that this structure must change.

Weiss is grateful for the amount of support the account received from the student body, though she wishes for more outward support from administration in taking action. As for the future of the account, Weiss hopes to see more of a following from the male population on campus.

“It’s an issue on both sides… but it’s really important that men are acknowledging the issue and figuring out what they can do to stop it,” Weiss said.

For Underhill, the account should serve as inspiration instead of something to avoid.

“This is not something that can be denied or washed away,” he said. “So what are we going to do about it?”

*Note: This account is not affiliated with Haven or the Medusa Movement. It acts as its own entity but has served as a launching off point for activism and initiatives on campus.