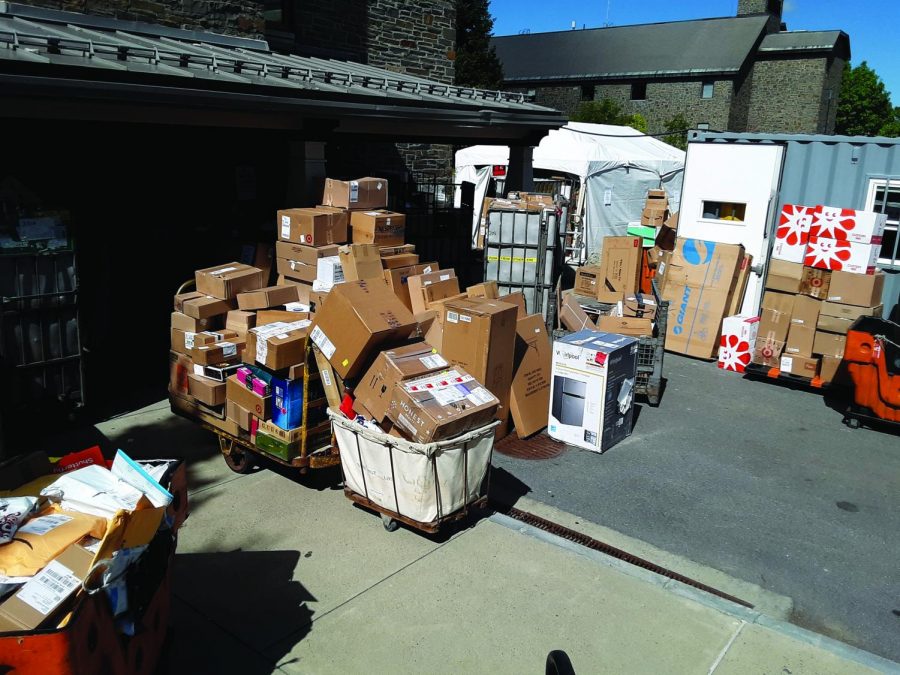 The start of the fall semester saw over a 100 percent increase in the volume of incoming packages to students compared to previous years. Mail Services implemented new restrictions upon receiving packages, such as a new appointment system for picking up mail and a tent outside of the COOP, to ensure students maintain social distancing and avoid overcrowding. In a campus-wide email sent on Wednesday, Sept. 16, Senior Vice President for Finance and Administration Joseph B. Hope asked students for their understanding as the mailroom staff dealt with an unprecedented amount of incoming packages.

Manager of University Printing and Mail Services Kip Manwarren said that, because of appointments, Mail Services expanded its business hours from as early as 7 a.m. until 6 p.m., or even later, during the week. To follow COVID-19 restrictions and social distancing procedures, staff members have adjusted working schedules. In previous semesters, the Mail Center’s working hours were from 10 a.m. to around 4 p.m. during the week, and, for a shortened period, from 10 a.m. to 1 p.m. on Saturdays.

“My staff shifted hours. Some of the staff comes in at 7 a.m., and other staff members come in at 10:30 a.m. They stay until 6:30 or 7:00 at night to try to make enough time up to give students an ample amount of slots for picking up packages. It is also a safety issue [to divide work shifts] because we have such a small workspace. With [COVID-19] restrictions, I have to split up the staff somewhat so that they’re not working all the time together. Half of my staff work outside, and half of my staff work inside. Trying to do all of this [maintaining COVID-19 restrictions] has been difficult,” Manwarren said.

Manwarren addressed new costs associated with this adjusted system that contributed to the higher expenses this semester.

Manwarren said that the campus-wide quarantine for students during Gate 0 was a busy time for Mail Services. University Staff from many different departments helped to deliver mail to residence halls while the mailroom staff worked to scan and sort incoming packages. Mailroom staff continue to deliver mail to students in quarantine and isolation at both the Wendt University Inn and student residences across campus.

In comparison to previous semesters, Manwarren said that the number of incoming student packages nearly doubled in the first weeks of August to mid-September. However, letters sent through first-class mail have decreased, while parcels sent to academic departments delivered by the mail services have remained consistent.

“[There hass] definitely been a visible increase [in incoming packages]. Just to give you an example, from August 10 through September 24, 2017, we inbound about 18,000 packages. That was during the 2017 season. But just this semester alone, in 2020, from the same timeframe, we inbound 30,600 packages. It’s a period of 33 [business weekdays] with the Labor Day holiday mixed in there. In 2017, it averaged about 550 packages a day, and right now, currently, we’re averaging about 950 packages a day. Almost double in a three year period. These numbers reflect only student packages,” Manwarren said.

Student mail has declined since the end of September, according to Manwarren. However, the large spike in incoming mail at the beginning of the semester has led to discussions concerning new methods to deploy in response to this high demand.

“With all of this going on, we have definitely viewed that we need more space and that has been taken into consideration. I think in the future, we will probably be looking at some other type of notification system for the students and of scanning packages. There’s a lot on my mind right now, trying to figure out the best way that we can provide the best service for the students,” Manwarren said.

Despite the increase in incoming student mail, the business relationship between the Mail Services and Hamilton Post Office has not changed drastically.

“I believe that we have a very good working relationship with the Hamilton Post Office, and I don’t really see that there has been a change at all in the time of [COVID-19] other than the large increase in the number of packages,” Manwarren said.

Postmaster of the Hamilton Post Office Brian Stone expressed similar sentiments about Hamilton Post Office’s relationship with Mail Services. At the start of the semester, the Hamilton Post Office was also busy scanning incoming mail and sending it to Mail Services on campus. Much of the incoming packages from the post office to the mail center at the start of the semester were from Amazon deliveries due to the contract between Amazon and the United States Postal Service (USPS). Incoming mail increased to the point where Stone had to allocate an additional worker to keep up with the higher demand. However, the amount of incoming mail has since slowed down.

“I had to bring in more clerks to [scan parcels] because of the volume… It took three [clerks] to do it. The volume is a lot heavier. It’s starting to taper off now. But, when the students came back, those last couple of weeks of August through the first couple of weeks of September [were] intense,” Stone said.

With Election Day coming soon, Stone said that many students go into the post office to buy envelopes and send in voter registration forms, mail-in and absentee ballots.

“I think students are buying a lot of stamps to send in their votes, or getting involved politically. I have never seen that before and I knew right away that that was probably what it was. With this political climate, students are being active for their political party,” Stone said.

The national debate surrounding USPS funding has not affected the Hamilton Post Office. Stone said that while the post office prepared to face any negative impact, the Hamilton community is supportive.

“When [COVID-19] came out, it was very quiet because everyone was being safe and staying at home. Now that we’re back to regular business, [the Hamilton Community has] been very supportive. They tell us, ‘we appreciate you,’ ‘we don’t want to lose you.’ I really don’t think Hamilton [Post Office] would close. It’s a decent-sized office. It’s busy and in a college town. I have no fear of that,” Stone said.

Unlike the Hamilton Post Office, Stone said the USPS did suffer as a result of COVID-19, though revenue had been declining prior to the pandemic as well.

“[USPS] lost a lot of money from [COVID-19], and we were already in financial trouble before. People are mailing less first-class mail, and that’s where we were making our money. We make money on parcels, but it doesn’t make up for the first-class mail that we had. We’re losing a lot of revenue because of that. In the entire country, first-class mail is down, and that was where we made a lot of our money. Parcels and standard mail doesn’t quite make up for it, so they just need to get innovative and find new ways to save money and hopefully find a new way to get on a good track,” Stone said.

Sharon Stevens, a postal worker at the Hamilton Post Office, said that while fewer packages are incoming now, the daily business was intense at the start of the semester. Stevens said that the Colgate student body’s adherence to the Commitment to Community Health is commendable.

“A lot of students had a lot of books and heavy stuff coming in because you had to be in your room [during the quarantine period in Gate 0]. It’s heavy stuff. We only had a couple of us doing all of this [scanning and sending packages to the Colgate mailroom]. But, right now it’s slowing down. I am thankful that students are being very good, wearing masks and taking good care of Colgate, not letting it shut down. I commend all of you,” Stevens said.

In response to making appointments and maintaining social distancing, senior Hakan Madenci said that the mailroom provides a good service amidst the pandemic.

“I think that the new system is really useful, especially considering everything that is happening nowadays. People need to social distance, and the mailroom is doing a good job enforcing those rules and putting signs on the ground to allow students to maintain distance from one another. They’ve been really helpful,” Madenci said.

As an improvement, Madenci said that the mail services should respond to the colder weather by placing outdoor heaters for students in line.

“It’s going to get cold soon. Waiting outside might be a problem, especially during peak times. There’s going to be a lot of people in line. I think they should install heaters to warm students in the cold,” Madenci said.

Even though Manwarren does not receive much feedback from students, he does understand the frustrations that some students may have with the new system. However, Manwarren said that the rules in place for picking up mail are for students’ safety.

“I know that sometimes the wait time is a little longer than maybe what they want in the lines out there, especially with the inclement weather that we’re having with rain and things like that. All in all, I think it has worked out. Having the time slots is not only for the students but for the safety of the students,” Manwarren said.