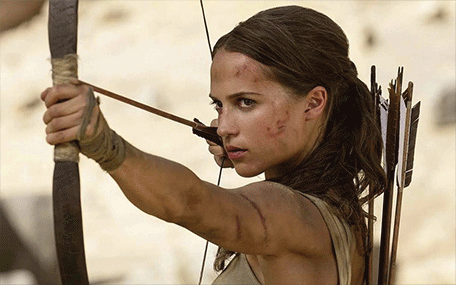 Films based on video games get a bad rep, and perhaps for good reason. Tomb Raider currently has the highest Rotten Tomatoes score so far – 50 percent – which is saying something. I personally didn’t like the first adaptation of the character of Lara Croft, so I had pretty low expectations; in fact, I only decided to purchase tickets because my dad insisted on “action.” I’m glad he did.

It’s so refreshing to have a female action hero, because sadly it’s still all too rare. The closest and most consistent heroine we see is Scarlett Johansson’s Black Widow, and she’s never been given her own movie, which I find ridiculous. My hope is that this reboot develops into a new series – because I think the more you see Lara Croft (Alicia Vikander), the more you’ll like her. She’s smart, gutsy, capable, beaten and bruised, but never broken.

A large part of the film’s success rides on Alicia Vikander’s performance and charisma. For those of you who aren’t familiar with her work, I recommend you catch her in Ex Machina or her Oscar-winning portrayal in The Danish Girl. Vikander exudes charm and grit, and unlike Angelina Jolie’s Croft, is un-objectified. You can immediately tell the difference between their movie posters: an unscathed Jolie in her tight booty shorts vs. a scarred and grimy Vikander, with clearly toned arms and shown (for the most part) from the waist up.

Overall the film is just a lot of fun. Everything from bike chases to archery and hand-to-hand combat appears – there is no lack of excitement. The characters’ search for Himiko, a mythical queen in ancient Japan, is intriguing as well. Also important to note is that the film’s action sequences are relatively realistic. In the fight scenes in particular, you can see right away that Croft is not invincible – far from it. Sometimes, like all action heroes, she even gets lucky with someone else’s intervention. Nevertheless, she always gets back up once she falls and relies on her wits and determination to see herself through.

For action fans, your other movie option this week is Pacific Rim Uprising – and quite honestly, I think you’d be better off with Tomb Raider. And this is coming from someone who loves John Boyega just as much as she loves Alicia Vikander. As usual, Boyega is fantastic, but that, coupled with the striking Jaeger robots, (somewhat) pleasing plot twist and solid cast, was not enough for me to like the film. To be fair, my hearing isn’t great. Yet even the scenes that didn’t quite require listening (Jaegers vs. Kaiju monsters),  the scenes with the most action, didn’t really draw me in. If you insist on watching Pacific Rim, your best bet is Guillermo del Toro’s original.

I usually abide by Rotten Tomatoes, but this time I can’t say I do. 46 percent of critics enjoyed Pacific Rim which is far too close to the 50 percent who enjoyed Tomb Raider. I do, however, trust the audience to make the right decision. And if you’re like me, you’ll find that it’s much more of an escape to root for a heroine kicking ass rather than having your ears bombarded with mindless noises and stressing out at the collateral damage of all those collapsed buildings.