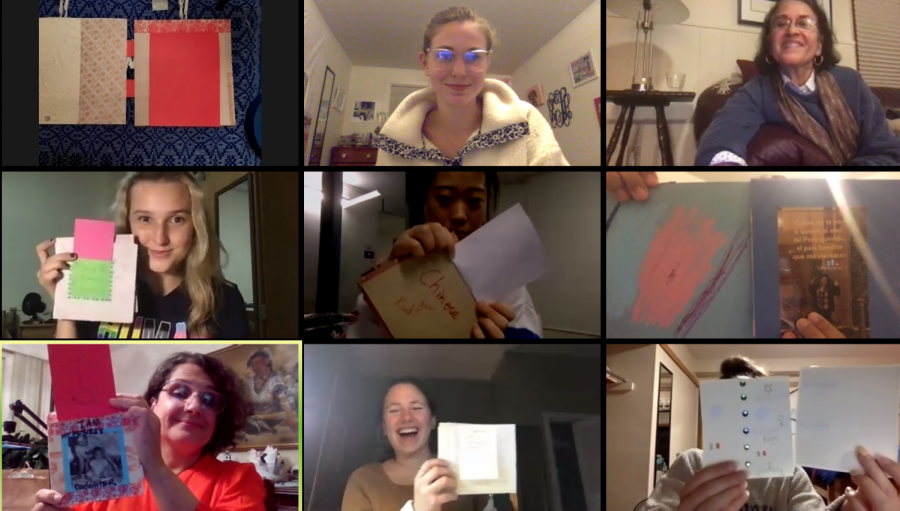 Students gathered virtually on Zoom for an evening of art and discussion last Wednesday. The Department of Romance Languages and Charles A. Dana Professor of Romance Languages and Literatures and Africana and Latin American Studies Lourdes Rojas worked with special guest Patty Eljaiek to organize “Belonging, Exploring Cultural Identity,” a art-based event open to all students. The event centered around creating an accordion book, a type of scrapbook that tells a story, and in this case, it was a story about identity and belonging.

Originally from Columbia, Eljaiek moved to the United States when she was 3-years-old and has since been back numerous times to visit family and explore her cultural roots. She is a visual artist who focuses on using art as a means of expressing one’s self and one’s story. Her work is featured on public murals around New York State, and she’s an artist for Educational Innovation. At the beginning of the evening session, Eljaiek shared personal stories on how the idea of cultural identity has many facets and that what is perceived might not always be the reality.

Given that the theme for the workshop was belonging, Eljaiek began by posing a personal question.

“What are you today?” Eljaiek asked.

Students then took turns describing their emotions and feelings that summarized their day, and Eljaiek explained that identity can be fluid and situational. She then led a conversation about belonging and the role of language in defining someone’s cultural identity. Students shared experiences of times when they believed they did not belong and how they felt in those situations. The discussion soon turned to art, and Eljaiek explained how art has everything to do with identity.

“Identity is how people perceive us,” Eljaiek said.

Before leading participants through a step-by-step process, Eljaiek shared her accordion book, which depicted her connection with her abuela (grandmother). She included pictures, quotes and written anecdotes in the small, artfully crafted scrapbook.

Next, it was the students’ turn to create their own, using kits provided by Rojas or their own materials, including anything they could find in their dorm rooms. The art prompt for the night was to “think about how you would describe your identity and how other people look at your identity.” Eljaiek encouraged everyone to be creative and express anything about themselves in the books.

After everyone completed their books, the group came together again to discuss the stories surrounding the newly-created art. Each student shared their scrapbooks, which were creative and unique. Some people drew photos to represent themselves, others used symbols and creative materials that communicated parts of their identities. The night ended with students sharing their thoughts and feedback about the event.

“I really enjoyed the art-making session, because I am not an artist and not creative in that way, but it was really nice to take a break and do something different for an evening,” Rodriguez said.

First-year Averie Roberts agreed and added how much she appreciated the art kits that were provided for the event.

“I really appreciate [Rojas and Eljaiek] for putting together these little kits. It was so thoughtful and so sweet, and I had a really fun time,” Roberts added.

Thanks to Zoom, events such as this one have become more accessible for students.  The semester might look different, but the Colgate community can still take advantage of these types of opportunities to create art and engage in important conversations.