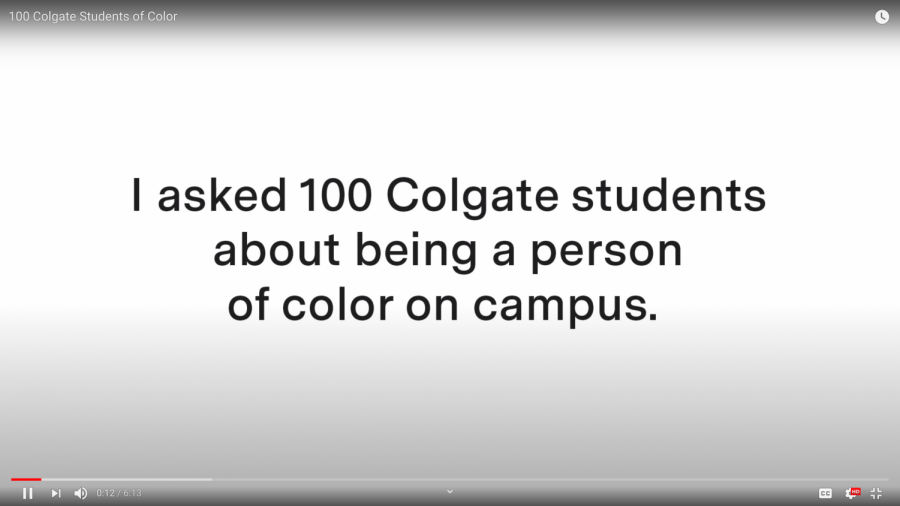 After a racist message was written on a residence hall whiteboard in November of 2019, Senior Brittney Chin reported feeling angry, exhausted and helpless. A junior at the time of the incident, Chin recalled, “I attended the speak-out, listened to my peers bare their souls, tears in their eyes, demanding the administration do something. It seemed like every semester there was another racist event: the glue gun incident, the defacement of the Chinese New Year sign, the ‘It’s okay to be white’ posters and nothing was being done… I wanted to do something.”

That “something” ended up being a video project called “100 Colgate Students of Color,” in which 100 Colgate students share their experiences as people of color [POC] on this campus by answering the questions: “If you had to describe what it’s like being a person of color on this campus in one word, what would it be?” and “What’s something you want white students on this campus to know?”

Little did Chin know, this project would change the way students, faculty and alumni talk about and view race on Colgate’s Campus, especially given that the video was shown to first-years during orientation this year.

“I think it’s important that the [first-years] are learning about how POC on this campus feel and hopefully are being more aware of their actions. As a lot of students mentioned, we need to work on building community, and the only way we can do that is through honest conversation,” Chin said.

Of the 100 students featured in the video, most described their experience as being different, alienating or difficult, and spoke about feeling inferior, unwelcomed, unaccepted and uncomfortable in predominantly white spaces on campus.

Additionally, multiple students expressed concern over a lack of change or action from administration in response to racist incidents on campus, and that, instead, they carry the responsibility of educating others about microaggressions and hate crimes that continuously occur.

Senior Silas Bond, a participant in the video, recalled his experience as a volunteer interviewee for the project.

“It was comforting and reassuring because it instilled the notion of there being other people here who feel similarly about being at Colgate,” Bond said.

Senior Emily Cruz González, a friend of Chin’s and also a participant in the video project, described how disheartening it was that so many students of color could relate to the experiences others expressed in the video. She also spoke of the pressure she felt to give meaningful answers.

“It’s not hard to come up with a response to the questions asked, but it’s hard to find the right response. You don’t want to underplay that experience [of a person of color],” Cruz González explained. “You don’t always get the opportunity to hold people’s attention, so when you have it, you have to make it meaningful.”

And the participants did just that. Chin explained that many Colgate students often do not understand the emotional toll that these racist incidents have on students of color and shared that she was moved by some of the participants’ responses.

“Some students I filmed got really emotional while talking,” Chin revealed. “When one of the girls I filmed said ‘I didn’t feel inferior until I came to this school,’ that was heartbreaking.”

The sad, but true, fact is that the topic of racism is not given enough attention on this campus. The students of color in the video ask that white students listen, engage in discussions, think before they speak and work to build a stronger community. One student simply wanted white students to know, “We are struggling.”

Senior Si Wei explained that her participation in the video encouraged her to re-evaluate her sense of security and comfort on campus. She was even surprised by her own answers.

“It was interesting that despite the fact that I am proud of my culture and had various positive experiences, a lot of my answers, which were provided right after listening to the question, were very negative,” Wei reflected.

Wei attributes this to her “spontaneous, gut reactions” being caught on camera, which ultimately prompted a different, perhaps more authentic view of her experience.

For other members of the Colgate community, the video served as an eye-opener about the harsh realities of being a student of color on this campus.

Senior Bella González recalls getting chills the first time that she saw the video and immediately showed her friends. She said that the video initiated important conversations about race within her friend group.

“One of my closest friends said she didn’t really see or hear a lot of microaggressions herself and asked me if I had ever experienced anything personally. I started listing my experiences with racism and microaggressions on campus, and it actually shocked her. We were able to have a great conversation after, but that was one of the first times I truly realized how different my experience is on this campus,” González said.

Senior Ethan Reiser had a very different reaction to watching the video, feeling as though he did not relate to many of the responses of the video participants.

“I think it’s a great video because it shows what students of color really feel like at Colgate that most of us don’t ever realize, but it also makes me feel kind of bad. I’m a student of color and I’ve never felt like an outsider or not accepted,” Reiser said.

Upon further reflection of why his experience may differ from other POC on campus, Reiser credited this feeling to his experience in his home town in rural Pennsylvania.

“Coming from rural Pennsylvania, I have always been one of the very few people of color in whatever setting I’ve been in. It’s possible that, growing up, the everyday racist language and actions I witnessed desensitized me to some of the really bad incidents that have happened at Colgate while we’ve been here,” Reiser said.

This very desensitization to racist incidents is prevalent on campus, and further highlights the problem of complacency and comfortability with the way things are.

The video has gained tremendous attention and sparked important conversations across campus in the past year. While Chin was overwhelmed with the response her project received, she is proud of herself for creating a platform for students of color to share their experiences.

“A lot of the time our voices are silenced, or our stories are shared in spaces [in which] white people are not present. I wanted everyone to hear what we had to say, because there’s a lot we have to say,” Chin said.