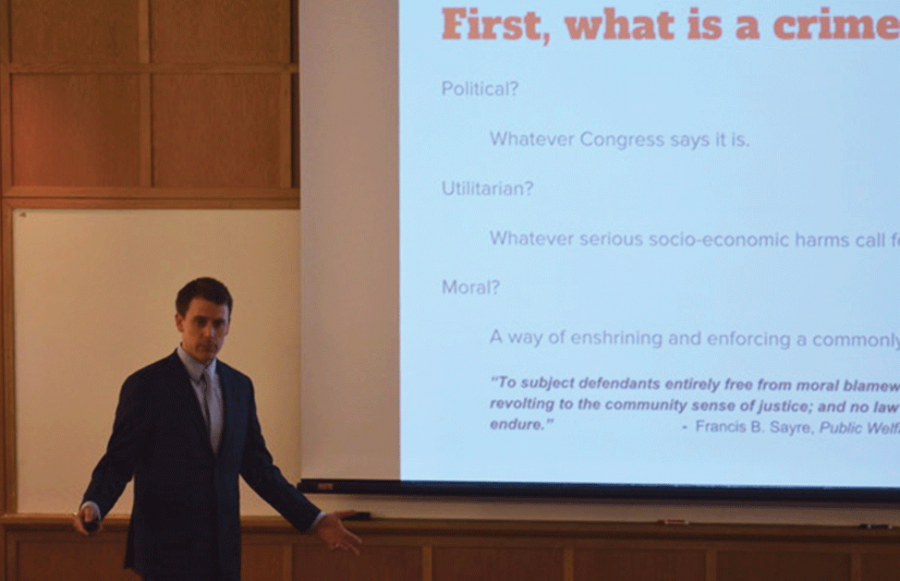 John-Michael Seibler, a legal fellow and member of both the Institute for Constitutional Government and the Heritage Foundation, delivered the lecture “Over-Criminalization, Asset Forfeiture and Criminal Justice Reform” on Thursday, March 1 in the Persson Hall Auditorium.

Seibler’s lecture was the second of a two-part series on criminal justice reform, focusing on the abuse of criminal law at the federal level.

Seibler discussed how criminal justice reform has become a bipartisan issue today. In 2010, the Heritage Foundation was among the first organizations to sound the alarm regarding the issue of federalization of criminal law.

Seibler focused on understanding over-criminalization and asset forfeiture, along with the problems they pose for citizens today.

Seibler defined over-criminalization as “the overuse, misuse and abuse of criminal laws and penalties – often at the neglect of civil and administrative remedies – to ‘solve’ every problem and punish every mistake.”

He began the lecture by discussing the history of criminal code. The U.S. Constitution outlines federal crimes as acts such as counterfeiting, piracy, felonies at sea, high crimes and misdemeanors and treason against the United States.

According to Seibler, these laws are “what citizens shouldn’t do and why they shouldn’t do it.” The first criminal code consisted of two Latin principles: Actus reus, conducting a civil wrong, and mens rea, intention or knowledge of wrongdoing.

Seibler discussed issues these criminal codes cause today, claiming that unreasonable, unknowable and vague laws reduce one’s ability to act with a “guilty mind,” or mens rea. He explained that people cannot look at the law and understand exactly what they can and cannot do.

Seibler provided an example of a vague and unreasonable law. An environmental bill passed in California makes it a crime for waiters to hand straws to customers in restaurants. Seibler proposed that instead of dealing with the person handing the straw to customers, policy should focus on straw companies that distribute, ship and transport straws. Seibler believes that “starting from the bottom” and making this act an immediate crime is just one example of why over-criminalization is such a major issue in our society today.

Seibler also discussed the major consequences that occur when individuals are convicted of a crime. Criminal law poses a stigma on the convicted, and results in the possibility of imprisonment, which itself comes with  lifelong consequences. People who serve prison time cannot vote, face a loss of employment opportunities and do not have access to state and federal entitlements such as food and housing. Integration into society is extremely difficult for convicted individuals, and 60 percent of these people will return to jail within five years. Seibler posed the question, “Are we doing what we can to make [convicted individuals] become better?”

Seibler outlined the reasons why so many vague, unreasonable and unknowable laws are passed in our society today. Congress, outside interest groups, prosecutors, agencies and courts all influence the passage of laws. In Congress, legislators pass criminal laws out of “political opportunism,” with little debate or time to really think these matters over. Often, there are already state laws in place, and the creation of duplicate federal laws interferes with state and local authorities’ ability to deal with these matters.

Seibler proposed remedies to the vast number of criminal laws. Seibler believes the government must identify all criminal laws and regulations, limit statutory delegation of lawmaking authority, enact mens rea reform, require judiciary review of all bills with criminal penalties, have Congress require floor debate for new laws, allow more time to draft bills and provide a framework for Congress to identify when a new criminal law is appropriate.

However, Seibler discussed some obstacles in enacting these reforms, particularly requiring Congress to have open floor debates

“They don’t do this and you’re not going to convince them to do this,” Siebler said.

Seibler explained that the institution is currently struggling as bills get passed without a say from other members, and this rushed process results in a large amount of laws.

However, Seibler continued to discuss the ways to make our system better, such as enacting prison reform. States that have passed prison reform, such as Texas, provide mentors for prisoners, create partnerships among the head of the prison with non-profits and teach individuals job skills. Seibler claimed these reforms prove successful, but still are not “wildly successful.”

“I thought it was interesting and a little strange that he didn’t talk about race at all,” Sweeney said.

“I really think that over-criminalization is such a big issue in our society today, but I thought it was promising that Seibler came up with a lot of different suggestions to fix this issue,” Vandevander said.