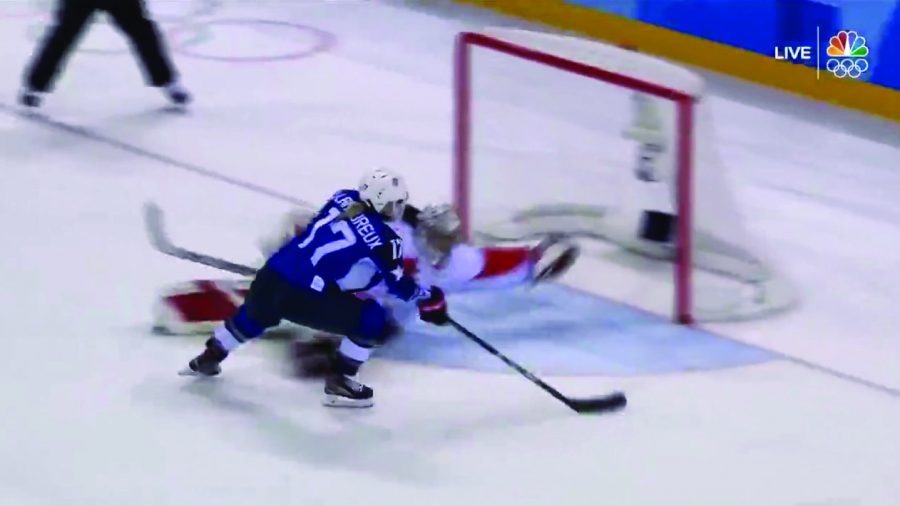 After her twin sister tied the game at two, Jocelyne Lamoureux scored the game winner in a penalty shootout against Canada in the Gold Medal Game. The Canadian team had not lost in 24 straight Olympic games and had won gold in each competition since 1998.

Instead, Shiffrin returns home with one gold and one silver medal, while Vonn only managed a bronze.

Women’s alpine skiing was poised for a rare Olympics with not only one star from the U.S., but two. Vonn is on her way out, and these will likely be her last Winter Olympics, but she’s the most decorated Women’s Alpine skier in history.

Shiffrin’s career is just starting, but she’s already being appointed as the chosen one to succeed Vonn in American skiing dominance. This will probably be the only Olympics in which they compete together, and it felt like the United States should walk away with at least five medals between the two of them. But things didn’t exactly work out according to plan.

Vonn may be the most well-known female ski racer in history. She burst onto the world stage at just 16-years-old, when she made her World Cup debut.

Unfortunately, her career has been marred by injury after injury. Many people might’ve thought she would (or should) give up skiing after hearing about all her grisly injuries, but she’s kept coming back for more, and she’s been extremely

successful over her career.

But Shiffrin is the future, and the future is now. She took gold in the Giant Slalom and silver in the Alpine Combined, which for any other ski racer would be a massive success. She insisted she was satisfied with her performances, but in the end, many people left disappointed. The expectations for her were just too high.

It’s important to note she’s only 22-years-old, and already has as many Olympic medals as Vonn (3), and one more gold (2 to 1). If anyone is a worthy successor to Vonn, it’s Shiffrin.

Down 2-1 entering the final period of the game, the United States Women’s Hockey Team was not ready to lose (once again) to the Canadians. With under seven minutes left in regulation, Kelly Pannek found Monique Lamoureux at the blue line behind the Canadian defense. She was spring-free on a breakaway, put on a quick move and fired a wrister that snuck under the glove of Canadian net-minder Shannon Szabados, leading announcer Kenny Albert to exclaim, “She scores!”

The score would remain tied at two for the rest of regulation and throughout the 20-minute sudden-death overtime period. Canada had an abbreviated power play in overtime after Megan Keller was called for body-checking with only 1:35 to go. This was just about the only action in the 2OT period.

In the shootout, Canada was the first team to go, and Natalie Spooner was denied by U.S goaltender Maddie Rooney. In the bottom of the first frame, Gigi Marvin capitalized to give the U.S a 1-0 lead in the shootout. Meghan Agosta got the Canadians back even with her goal in the second round, and Szabados would go on to save the next two she saw. Heading into the fourth frame, with the shootout tied at 1-1, both Melodie Daoust (CAN) and Amanda Kessel (U.S) scored. Both goaltenders denied the next shots, making it a tie game heading into the sixth frame. With the potential gold medal clinching goal on her stick, Jocelyne Lamoureux, twin of Monique, pulled off one of the most amazing Olympic shootout moves of all-time, right up there with T.J. Oshie’s shootout in Sochi 2014.

Jocelyne started off slowly, weaving from right to left, and then back to her right. Then, she started heading down ice just above the circles and stick-handled her way through the slot, getting closer to Szabados. Then she made the move that has since been renamed the “Oops! I Did It Again” deke. The right-hander dropped her shoulder and brought the puck to her backhand, forcing Szabados to drop down and follow the puck. Almost falling over, Szabados realized Jocelyn was about to bring the puck back to her forehand. As she executed the final piece of the move, she had Szabados way out of position and slid the puck into the open net, past the extended glove of the goalie. A celebration followed the goal, but the U.S needed one more stop from Rooney, who was up to the task. The U.S. took the shootout win 3-2 and knocked off Canada for the first time since 1998, ending Canada’s 24-game Olympic win streak.