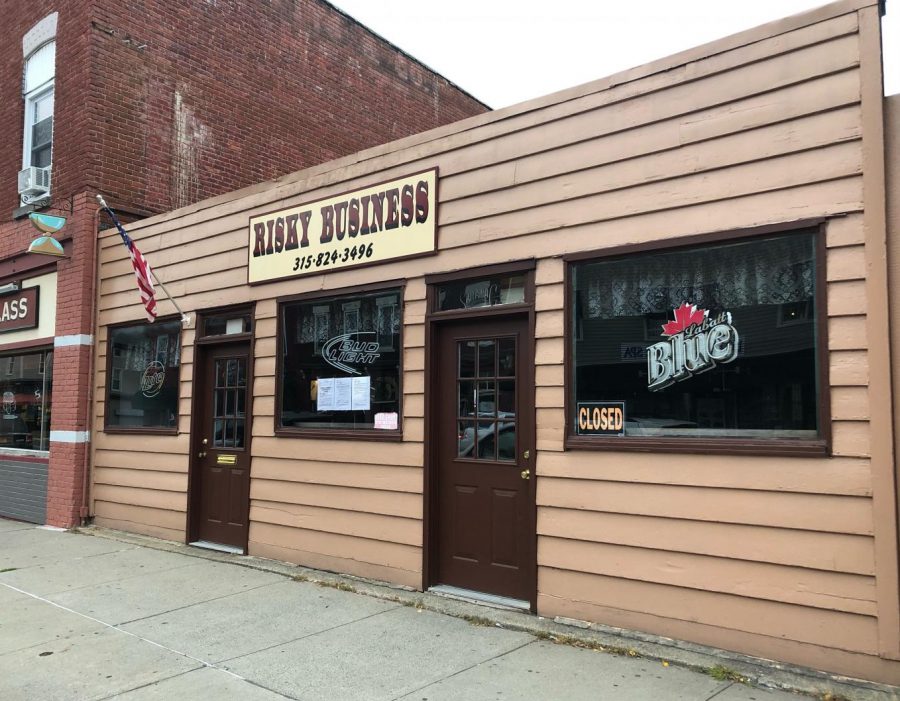 The State Liquor Association (SLA) recently issued an order of suspension of the liquor licence to local bar Risky Business Cafe, also known as Magic Mari’s Risky Business or more colloquially as The Bacon, due to supposed violations of COVID-19 regulations. According to 30-year owner Mari Synder and students in the bar at the time, SLA agents in street clothes entered Risky Business on the night of Sept. 11 and took pictures of students in the bar. An order of suspension was issued and posted on the front window of the bar the following morning accusing Risky Business of violating food, mask and social distancing requirements and occupancy limitations.

Synder, who said she could face up to a 10,000 dollar fine for each charge (for a possible total of 60,000 dollars), disputes some of the charges and has entered a plea of non-guilty, but says she has yet to be given any court date or information about when they will proceed with hearings or re-opening.

The summary of the order of suspension outlines the violations as including patrons disregarding social distancing outside Risky Business while waiting to enter, 50-70 patrons inside the bar, which violates Risky Business’ 43 person limit as per New York States COVID-19 50% occupancy rule, patrons standing and consuming food and beverages without adhering to mask requirements, serving no other food other than popcorn and ice cream sandwiches and patrons playing foosball.

Snyder explained that she believes many of the SLA charges are inaccurate and is extremely upset by the decision to suspend her license in lieu of a warning. She specifically takes issue with three of the five accusations brought against her, claiming that the establishment also had a chicken barbecue microwavable sandwich available in addition to popcorn and ice cream sandwiches, that they were only at half capacity with 43 people in the bar and that they had covered the game tables and put the pool sticks and foosballs away. Synder said the agents made the violations seem worse than they really were, which was the most upsetting part of her suspension.

“[The agents] gave no report that night. I didn’t even know how bad it was going to be. When we [came] in to work on Saturday night at 9 o’clock they were waiting and they had slapped the [suspension notice] on the front of the glass of the front window… for the whole town to read that was really embarrassing,” Synder said. “They said somebody had complained [about] us. I hadn’t had any other complaints… I had only just opened up that Tuesday and this happened on Friday. I thought it was so unfair I wasn’t even given a chance. I was just slammed like I was some terrible person.”

Synder reports that two different SLA agents along with a local officer visited her the morning of Sept. 12, who were apologetic and kind, and although she understands that they were doing their jobs, she feels as though the SLA “threw the book at her” and finds the fines extremely harsh.

Jake* and Robert*, two students who were in the bar when the SLA agents arrived, estimate that there were somewhere between 30-50 people in the bar. The two students recall that when the agents entered, they did not introduce themselves and when asked, did not explain why they were taking photos.

“I asked [one of the agents] why he was taking pictures and he didn’t really give me an answer. He kinda just screamed at me ‘Get the f*** out of here, just leave.’ So, we didn’t ask anymore questions [and] just ran outside. They didn’t announce themselves or explain anything,” Robert said.

Synder also reported that the two SLA agents did not have masks when they tried to enter, and there is also doubt among students as to whether their masks completely covered their faces once inside the bar. Snyder said that when the two men arrived, her doorman refused them entry  because they were at capacity.

“Here’s the laugh. They come in about masks, the two gentlemen that came in were not even wearing masks themselves,” Synder said. “[They] were very rude, and didn’t even count how many people were in there… and just didn’t seem that professional to me.”

Before the SLA agents arrived, Jake recalls students moving between tables to talk to different people and that there seemed to be too many people in the bar for everyone to be seated. Robert added that students were gathering in large groups, and students arrived in a large wave.

Synder recalls being overwhelmed with the amount of students who had arrived at once, and that many students had their masks around their necks. After opening on Tuesday, Sept. 8 for the first time since March, Snyder said she wished she had been given a chance to adjust to COVID-19 rules and regulations before being shut down completely.

“[On Tuesday], I only had about 15 students. I recorded everything. The next day I had 5 local people. Then, Thursday, the night before, I had like 22 people [spread out] the whole night. But Then Friday night they all came in at once,” Synder said. “I had already decided if we were gonna open up Saturday night I was only gonna let 25 people in because it was too hard to control people and get them used to how things had to be. I didn’t even get a chance to do that.”

Snyder explained that she needed an adjustment period to not only get a handle on the rules herself, but also get students and locals used to the new rules. The same sentiment was expressed by Greg Wilcox, owner of The Hourglass, a local bar next door to Risky Business. He reported that the SLA agents visited The Hourglass before going to Risky Business, and listed a few things they were concerned about, but did not shut them down. Wilcox said COVID-19 regulations are a difficult transition for restaurants and bars, and credits the Hourglass’s success to their extra preparation time as they reopened this summer. This time allowed them to take more precautions to prepare for the influx of students, such as hiring more staff members. Synder was unable to open this summer due to illness, so she opened up when students were released from quarantine.

“It’s almost impossible to implement these public health guidelines instantly. It takes a little while to adjust to it and we had to train the staff and the customers. It’s like walking through a minefield every week here,” Wilcox said. “I think we’re doing well, but you know, we’re not perfect. Nobody is. We’re trying under these extreme conditions.”

Robert and Jake also believe that Risky Business simply got overwhelmed. Both expressed that students were extremely excited to be out of quarantine, and that this unfortunate situation is reflective of social frustration. While Jake said he believes most of the responsibility lies on Risky Business employees for letting too many people into the bar, Robert believes the students and the employees share responsibility for the situation.

“I would say it’s probably fairly distributed because it was the second day out of quarantine, so the students probably got a little over excited about being out. But, if you see what [The Hourglass] is doing now, they have a hard cap[acity] and [are] splitting people up into their little groups, and [Risky Business] really wasn’t taking those extra steps,” Robert said. “Everyone was at some fault. The students surely didn’t help.”

Synder, Wilcox and Carrie Blackmore, owner and operator of the Good Nature Brewery, expressed that it has been difficult keeping up with the changing rules and regulations. Blackmore, like Wilcox, opened over the summer, and implemented changes to handle the influx of students. Along with hiring more staff, Blackmore temporarily changed The Brewery’s age requirement.

“We started planning months before we even opened to make sure that we could comply and keep everybody safe while trying to provide a positive guest experience. We did limit the first week [when students were released from quarantine] to 21 and over, just because we wanted to make sure we were able to seat everybody who was coming out,” Blackmore said.

Blackmore and Wilcox both say that students have been respectful of the new regulations and restrictions and, rather than students refusing to adhere, they simply forget and need a gentle reminder. They both believe students are doing their best to comply with the rules, and Blackmore says even when they removed the age requirement, they have not had issues.

Snyder shares similar sentiments and does not blame students for the liquor license suspension. Rather, she feels extremely angry at the SLA.

“The students don’t know about [the rules] either; you have to be able to talk to them. I know that they didn’t intentionally do anything [wrong],” Snyder said. “I miss the students. I’ve been in business 29 years and it’s sad.”

Wilcox also said that he regrets that the SLA agents visited Hamilton so soon after students were released from quarantine. He believes if the SLA agents were to come now, they would see that businesses have adjusted and have control over the room.

“They caught us real early. The town was absolutely dead all summer long [and] all of sudden we got 1,000 kids that are old enough to drink, bam, just dropped on us,” Wilcox said. “Those [businesses] are people’s livelihoods, that’s their lives… they’re not really working with us as much as they could be.”

Although Wilcox said he understands the Governor’s priorities, balancing business and safety during COVID-19 is difficult and complicated.

“I understand the Governor. His number one concern is to stop the spread of COVID-19 no matter what. He doesn’t care about your business. If it’s about your license versus life or death, what are you gonna pick?” Wilcox said. “Now that I’m looking at it, it’s hard to argue.”

Wilcox and Blackmore have known Snyder for many years and are extremely sad to see her small business go through this suspension. Robert and Jake also expressed disappointment at the suspension as there is now one less place for students of age to socialize safely.

Synder said her worst fear is that she could be closed past the end of the year and she remains upset that some thought she deserved to be shut down.

“I have this awful feeling that it might not be [until] the beginning of next year before I even get this thing straightened out,” Snyder said. “I heard that some people had been saying [that] I deserve what happened to me. Well, I don’t know how I did anything to deserve something like that. [COVID-19] just made it a really difficult situation for us, for everybody, in the bar business.”