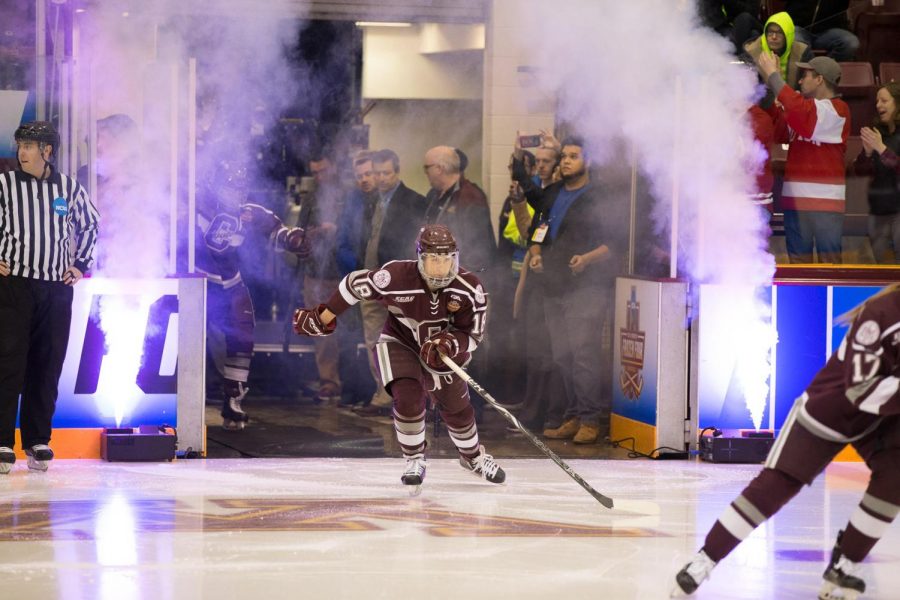 The women’s ice hockey team had a historic season, most notably as an NCAA finalist and ending the season with a record of 34-6-1. The highlight of the team’s season was arguably during NCAA tournament play and its two games during the Frozen Four. The team defeated Northeastern in the quarterfinals with a 3-1 victory and this win allowed them to advance to the Final Four. They played a phenomenal game against Wisconsin, pulling out a victory after double overtime play. Their final game of the season was against Clarkson, who they had faced earlier in the season three times. They lost twice, 0-3 and 3-5, but also beat them once in overtime 4-3.

This was an incredible matchup but unfortunately the Raiders fell short in overtime, losing 1-2. Regardless of this loss, the team has a lot to be proud of for its 2017-18 season performance and the vast improvements made by the senior class during their time at Colgate.

Senior forward Shelby Perry reflected on her past four seasons at Colgate and the evolution of the women’s ice hockey team since she arrived at Colgate her freshman year. She touched on the history of the program and how much the team has changed in the past few years.

“When we came in as first-years, we knew the team was not that strong, but Coach Fargo had a vision for the team and the program and we believed in him. He believed in us and we believed in his vision. Freshmen year we only had  seven wins and as soon as the class below us came in, our program changed. We went from seven wins, to two consecutive 22 win seasons and this year’s record-setting 34 wins. It took four years and a lot of hard work, but we didn’t stop working and believing until we got there,” Perry said.

Perry then talked about the team’s dynamic this year and what she thought led to its great success.

“The biggest difference I would say about this year compared to years past is that everyone on the team believed we could do it, that we could make it to the national championship game on March 18. Since the beginning of the year, 3/18 was always a date that we talked openly and confidently about and we knew that if we really focused on playing our game every day that we could reach that goal.

“It was an unfortunate ending to a historic year, but we set so many records and had so many “firsts” in program history that it makes everyone excited for the future. I also think it helped this year that we had 15 upperclassmen to lead the way on and off the ice. It felt like this year we did not leave anything up to chance or fate, we went out and controlled our own destiny and it resulted in us playing in the national championship game,” Perry said.

The journey that the women’s hockey team has made over just these past four years is remarkable. Their hard work and persistance is what allowed them to improve year after year and find great success this year. Congrats to the entire program for an outstanding season.