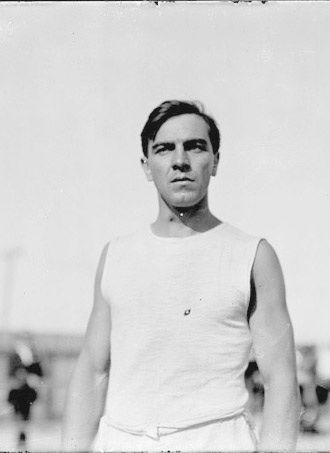 Frank Castleman, a three-sport athlete for the Colgate Red Raiders from 1902-1906, captured a silver medal at the 1904 Summer Olympics.

The tradition of the Summer Olympics, like The Colgate Maroon-News, has stood the test of time. As part of the Maroon-News’ 150-year-old birthday party, Natty Sports celebrates two Olympic medalists who donned the maroon and white: Lauren Schmetterling ’10 and Frank Castleman ’06 (as in 1906!). Though separated by over a century, these two American heroes proved to the world that Colgate athletes, though small in number, have the talent and drive to reach the pinnacle of their sports.

We all know about Lauren Schmetterling. The 2010 grad carried the heavy weight for the women’s rowing team for four years at Colgate, prepping her for a beastly run of three-straight golds in consecutive world championships. At the 2016 Summer Olympics in Rio, she helped the United States paddle away with the gold medal in the women’s eights. Schmetterling, accompanied by ESPN anchor David Lloyd ’83, elucidated her Olympic experience in October 2016 in the Colgate Memorial Chapel. A few lucky students at the event and at the boathouse reception even got to see her gold medal up close.

Schmetterling’s superb achievements cannot be overstated. However, there has been more than one Summer Olympic victor than Schmetterling in Colgate’s history. Overlooked in the discourse of elite Colgate athletes has been Frank Castleman. At the 1904 Summer Olympics in St.

Louis, Castleman captured silver in the 200-meter hurdles, the last Games in which this competition occurred. Even though he did not finish at the top of the podium, Castleman’s achievement in an era of hyper-competitive, bare-bones American track and field should no longer be ignored.

Castleman, born in Vestal, NY, enjoyed a Colgate career that was nothing short of legendary. A consummate student-athlete, he was sophomore class president, a brother of Delta Kappa Epsilon, member of Greek-lettered honor societies, and an ultra-rare three-sport athlete for the Red Raiders: baseball (now defunct), football and track. During his senior year,

Castleman led the baseball team with a .412 batting average.

Castleman was a stellar track athlete from the get-go. During the Inter-Collegiate Meet in spring 1903 (his freshman year), Castleman won four events: 100 meters, 110-meter hurdles, 200 meters and 200-meter hurdles. During every one of these races, he set the Colgate school records. Castleman would go on to win all four of these races at every Inter-Collegiate Meet from 1903-1906. This meet, typically only consisting of three schools, was not nearly as competitive as the Intercollegiate Athletic Championships. During Castleman’s time at Colgate, the team was only invited once: his sophomore year, 1904. Here, the Red Raiders competed with the cream of the crop in the Northeast, including Ivy League powerhouses Harvard and Penn. Castleman finished a close second to Yale’s Clapp in the 200 meter hurdles. A tenacious competitor, Castleman used this defeat to fuel his training for future, more important races.

Fast-forward to July of that year. Castleman, a rising junior, already owns the Colgate track record books. He has qualified for the 200-meter hurdles at the Summer Olympics in St. Louis, Missouri. Castleman has escalated from the competition of the Intercollegiate Athletic Championships to the world’s biggest stage. Alongside him in the race are world-class sprinters from Michigan, Wisconsin, Dartmouth and UChicago. Castleman sprinted an excellent race, narrowly falling behind rival Harry Hillman of Dartmouth. He received the silver medal for his 24.9 second performance, a personal record that he would beat during 1905, his junior year.