The Legacy of Colgate Student Activism 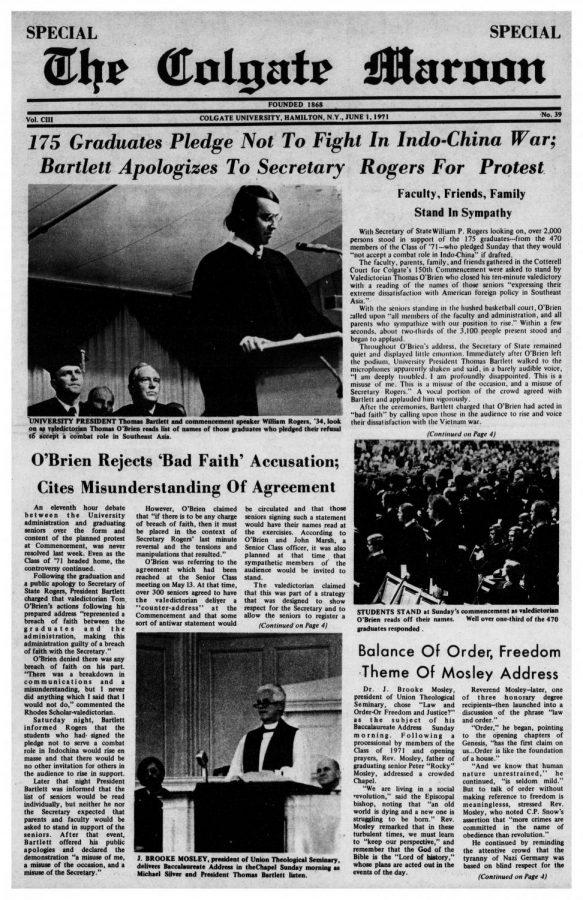 William Rogers ’34 was the Commencement speaker for Colgate’s Class of 1971. I can imagine there was a stir on campus after his selection. Under the Eisenhower administration, he served as deputy Attorney General until being promoted to Attorney General. Rogers went on to serve as Secretary of State under President Richard Nixon. It seemed like his Colgate education had taken him far.

But students on campus were not pleased. The war in Vietnam was still raging. Rogers had been Secretary of State for almost two and half years at this point. There had been gradual reduction in troops but the war was far from over. Protests from the 1960s spilled into the 70s. Students felt the pains of their peers who were still fighting or had already been killed in this senseless war. Faced with the man who had so much influence, there was a chance to be heard.

A special edition of The Colgate Maroon, (a predecessor to The Maroon-News, before it merged with The Colgate News) published on June 1, 1971 covered the aftermath of the 1971 Commencement ceremony. Rogers agreed to do the speech only if “there would be no demonstration and that he would not be embarrassed.” In that speech, Rogers spoke of American successes overseas and the promise of the Vietnam War coming to an end. His speech lasted under half an hour and his conditions were met. Audience members and graduates recall he received a “polite applause.” Then valedictorian Tom O’Brien ’71 took to the stage.

O’Brien’s entire speech was printed in the special edition. He opened his remarks stating, “This speech is dedicated to many of my classmates who are not here today because they dropped out to find themselves. This is supposed to be a counter-statement on behalf of the seniors who disagree with American Foreign Policy in Asia. Many of us feel it is not nearly enough to express our dissent many of us feel we should have a counter-graduation and many of us feel that we are being put through a ritual of a culture we no longer share, and that we should have had a counter-graduation even if the Secretary of State had not come.”

O’Brien spoke of the irreversible damage the war in Vietnam had done and how the U.S. retreat from the war through Vietnamization would only continue to harm the Vietnamese peasants.  He spoke to the sacrifices many young Americans had made for this war and how their lives would be forever altered. He concluded the speech by listing the names of 160 men who signed the petition stating if they were drafted they could not accept a combat role in Indochina. Those men rose in the audience when their names were called. He asked anyone in the audience of family members, professors and administrators to rise if they sympathized with his statements. It was reported that two-thirds of the 3,100 people in attendance rose and clapped.

O’Brien faced great backlash. Then-president of Colgate, Thomas Bartlett, took to the microphone to apologize for that speech. In The Colgate Maroon O’Brien was quoted rejecting the accusations that he made the speech in bad faith. The entire edition was in response to this speech.

This was not what I was expecting when doing my research for this special edition article. I am blown away. But this story also has me wondering where this spirit and courage on campus has gone. The 60s and 70s were a point of major conflict and tension when it came to international relations as well as leadership in the executive office. But here in 2018, we are facing similar issues with the Trump presidency and seemingly imminent war with multiple nations, such as North Korea. America has seen its three largest protest marches in its history. Yet Colgate students seem to be comfortable in the bubble central New York offers. I challenge my peers to join me in engaging Colgate with the politics of our current era through productive conversation, peaceful protest, and defiant dignity in the face of speakers on campus we may disagree with. We need to bring the vitality of Tom O’Brien’s bravery into Colgate’s third century.

Tom O’Brien, you’re a badass. I am glad to be able to honor you in this celebratory issue after 150 years of The Colgate Maroon-News.