Abhi the Nomad Marches to His Own Beat 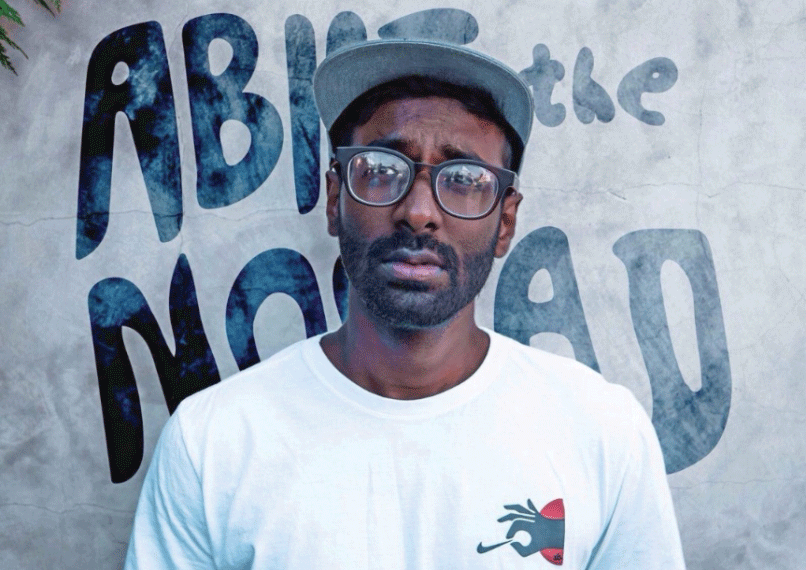 Abhi the Nomad is the type of artist that will never be boring. He is an exciting enigma and also relatively unknown. So, let me introduce you. Abhi is originally from India but spent time growing up in China, India and Fiji, and went to college in California. That’s where he gets his name from – he’s a nomad who has already traveled the world.

His record deal is with Tommy Boy Entertainment, alongside Ghostface Killah and De La Soul. Abhi is a producer, rapper and singer. His latest album, Marbled, is a double album that mixes hip-hop and rock. The album is refined, classic and smooth. The raps are poetic and relevant. On the album intro “Mama Bling,” Abhi raps, “what a sad reality that we have, scrolling through my twitter like what happened to rap?”

Abhi may be very frustrated with the current ‘sound’ of hip-hop, but his music is not in danger. If anything, his music will thrive because it is not like anything else right now. Hip-hop has had a history of rock integration, such as Run-DMC and the Beastie Boys, and Abhi wants to bring back this fusion; Marbled can be see as the first step toward this goal.

Marbled is an enjoyable listen for most moods and serves as an example of how genres can blend tastefully like a good smoothie. In a press pack for the album, Abhi cites 10 different albums as influences for this project. Chance the Rapper’s Acid Rap, Kendrick Lamar’s good kid and m.A.A.d city, Nirvana’s In Utero  and Aesop Rock’s The Impossible Kid are a few of the albums mentioned and each of these albums’ influences can be heard throughout Marbled.

In my opinion, the best tracks on the album are “Sex ‘N Drugs,” “Somebody to Love” and “Mama Bling.” “Sex ‘N Drugs” has some groovy synths that complement the catchy chorus. The verses are laid-back and feature swinging melodies. Abhi sounds like Chance the Rapper on “Somebody to Love,” yet he doesn’t bite. Rather, he respects the influence and retains his distinctive voice while adding a distinguishing pop-rock edge. “Mama Bling” is triumphant and sets the tone for the album. There are many questions and themes that are covered on Marbled – “Mama Bling” addresses many of these topics.

Although Abhi could probably score a big-name feature, the album features artists who are all relatively unknown themselves. Harrison Sands, an R&B artist, appears three times and delivers a nice change in voice to the album. The song “Pressure” includes two excellent features from Shota Lodi and Dylan Montayne.

Abhi the Nomad is at the genesis of his career. He sounds fresh and his music is mostly original. At times, his influences overpower him and you can hear a little too much of them. Abhi’s main advantage is his genre fusion seeing as he has the music production and rap writing skills to pull it off. If he continues to refine and rework his sound, then he may just carve out his own niche. And maybe then, there will be fans who start to cite Abhi the Nomad as one of their influences.