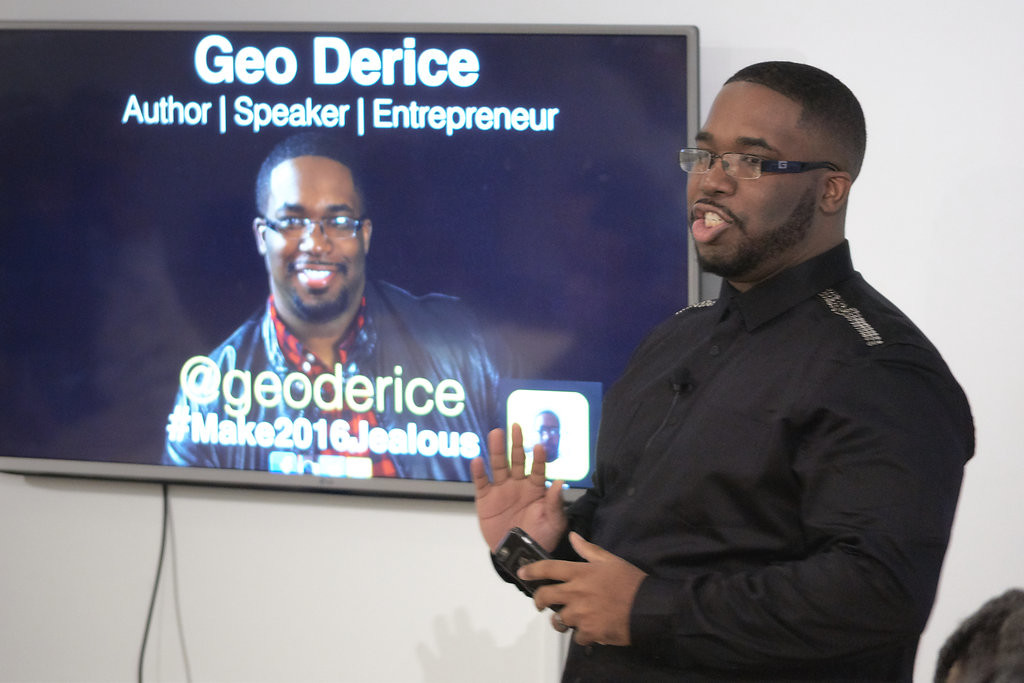 Author of  “The Thirst is Real” and speaker Geo Derice presented on how to improve anti-racism efforts on college campuses to the Colgate community last week as the first of a four-part community action-based series.

Derice is a Brooklyn native who speaks at college campuses across the country to teach students how to maximize their full potential. Derice presented at Colgate last fall, and his event this semester titled “From Information to Implementation: Anti-Racism in Practice,” was sponsored by the Colgate Student Coalition (CSC) and the Center for Leadership and Student Involvement (CLSI)

“I thought that was really useful because we had a lot of educational events for the 13 Days [of Education] which were all amazing but then the question is, ‘how do we use what we learned in practice?’. At the end of the day there is still a lot that needs to be challenged at Colgate”, Taylor said.

Derice gave students many tips on how to participate in this global movement for racial justice in tangible ways.

“Students don’t need to know everything to participate… perfection is not required in order to participate in the journey to create an antiracist institution at Colgate: that type of environment where its safe for everyone where they all have the same equal opportunity to thrive and to participate and to truly enjoy the Colgate experience at its full potential versus only a select few are able to do it,” Derice said.

Derice said that at predominantly white institutions like Colgate, it can be easy to be passive towards anti-racism.

“The biggest mistake we can fall into is thinking it has nothing to do with us.  When we think that way we don’t realize that our participation, even if you’re fine, is going to create an even greater fine for the community at large.  At a school that is a predominantly white institution, we can often think that if it doesn’t affect me, it doesn’t matter.  But it does matter because you can affect it even if it doesn’t affect you.  It is putting your privilege into power essentially.  It is something that can be proactively done rather than passively turning a blind eye and saying ‘It doesn’t have anything to do with me,’” Derice said.

Taylor remarked on some of the immediate action steps she learned that she plans to use in the future.

“He stressed a lot about discomfort and made me think a lot about how to enter into the conversations about challenging different ideas that are oppressive or offensive… His discussion about discomfort and being real with yourself was really helpful in understanding that ‘alright, I still have to do it, it might be uncomfortable but I still have to do it’ and he gave some good tips on how to do this,” said Taylor

Senior Sasha Balasnov thought that the event was engaging and an important discussion on Colgate’s campus at this time.

“Geo had incredible energy! I think that after the 13 Days of Education, a lot of people including myself had learned so much but were feeling a little lost as to where to go from here. The action process just seemed a little daunting so it is so important to have programming like this where we can continue the conversations we just started and actually build on the momentum. Its good to be reminded that this is just the beginning and we have a long way to go in learning anti-racism and that it is supposed to be uncomfortable and challenging, but all important things are — it is the only way to generate change,” Balasnov said.

Co-captains of the women’s basketball team and seniors Keelah Dixon and Nia Ahart brought this event to the attention of their coaches. The entire team and coaching staff were in attendance at the event.

“I pushed to have my team attend this event because we have five individuals of color on the team, with four being Black. It is incredibly important to be mindful of the distinct experiences that we have on campus so the team can be supportive of each other and conscious of the struggles that others endure. I felt this would be pivotal in strengthening team chemistry and highlighting the importance of taking action,” Dixon said.

Ahart said the team’s attendance at the event was important for the students of color on the team.

“Being one of five individuals of color on our team, it was important for us to attend the event, so that we feel supported while attending a predominantly white university, as well as being on a predominantly white team. In our program, we pride ourselves on family, so attending events that discuss matters of racial injustice, allows everyone to understand the struggles we go through daily. I think there is a lack of support within the greater Colgate community when discussing racial matters. Discussions and events like the one we attended are important when trying to open the door for conversation,” Ahart said.

More action-based events in this series sponsored by the Colgate Student Coalition are planned for the weeks of Oct. 19, Nov. 5 and Nov. 16.