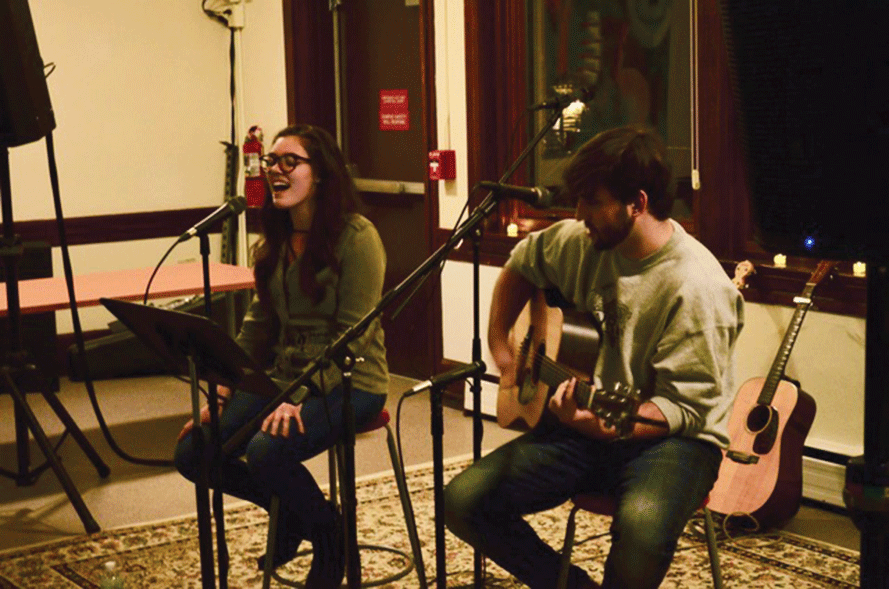 Reminiscent of Johnny Cash and with an energy comparable to the Black Keys, Kiah’s music style is characteristic of the Old South with a modern twist. In addition to performing various shows as part of a tour throughout the U.S. and the UK, Kiah was able to give an intimate performance to an enthusiastic Colgate crowd using her voice, the guitar and the banjo. Although she has performed at Caffe Lena in Saratoga Springs and frequents the Northeast, Thursday’s performance was the furthest North she has traveled in New York.

The night began with an acoustic performance by juniors Sierra Sunshine and Isaiah Keyes, the opening act duo. They performed covers of both “You Go Down Smooth” and “Hallelujah.”

Amythyst Kiah’s set consisted of both traditional and original songs, and she began the night by playing “Trouble So Hard,” originally performed by Vera Hall, a black domestic worker in Livingston, Alabama who sang a cappella. Kiah also drew inspiration from Reverend Gary Davis, a prominent blues and gospel singer.

Kiah spoke about how folk music is interesting because a lot of it was created before music technology evolved. She also remarked that Appalachian music, which includes many ballads and African-American blues influences, is a hybrid of British Celtic and African music.

Associate Professor of Physics and Astronomy Jeff Bary is a faculty director of Browns Commons who was instrumental in bringing Amythyst Kiah to Colgate’s campus.

“[Amythyst] is a powerful and soulful vocalist with a rich sound and amazing vocal range. She brings an ethnomusicologist’s perspective to the traditional roots music she loves to play. Her family has deep roots in northeastern Tennessee, a place I know well and one that plays an integral role in the development of American music. She spoke about the Bristol Sessions and the recording of the Carter Family before playing one of my favorite Carter Family tunes, “Bury Me Beneath the Willow.” As a devotee to Old-time and Appalachian Roots music, I was completely enamored with her performance and so happy to share in that experience with the students, faculty and community members in attendance,” Bary said.

Other songs included “Darlin Corey,” “Hangover Blues,” “Another Man Done Gone,” “Wildebeest,” a more upbeat “I’m Getting Ready to Go,” an old gospel tune “Will The Circle Be Unbroken,” a cover of Radiohead’s “Fake Plastic Trees” and an encore performance of “Brand New Shoes.”

The Coffeehouse performances have been a fantastic opportunity to promote art and music on campus. Given that Broad Street Records used to have a significantly larger presence, it is important to maintain a sense of connection with the performing arts through intimate concerts like this. Perhaps the Coffeehouse series will be a stepping-stone in the further promotion of the arts at Colgate.

“Live music is special. I didn’t learn this until I was a graduate student at Vanderbilt University in Music City USA, Nashville, Tennessee. I hope to do my part to help Colgate students discover this fact at least a few years before I did. No matter how long I had been at work on a given day, and grad school days could be extremely long, I could go out, often to the “World Famous” Station Inn, and within minutes of hearing a high lonesome vocal or some fancy guitar lick followed by a hoot from the crowd, I would be unconsciously grinning from ear to ear and the stresses of the day would recede,” Bary said.

“I’m really glad Browns Commons is hosting these Coffeehouse performances. Being a student at Colgate makes it really easy for us to forget that a world exists outside of Colgate, and these Coffeehouses are a wonderful way to maintain contact with that,” sophomore Rupika Chakraverti said.

Students of various class years helped organize the event, including the set up, obtaining refreshments and advertising.

“I am thankful that several first and second-year students are music lovers and have provided much needed support to help run the Coffeehouse shows. Although we are still in the process of building this series, which we intend to be one of Browns Commons’ signature programs, I am already so encouraged to see audiences of 40-50 people come into 110 Broad St. on a Thursday evening to often see an artist perform that they haven’t heard much about. A lot of this is due to the efforts of the students as they share with their friends just how cool these intimate shows can be,” Bary said.