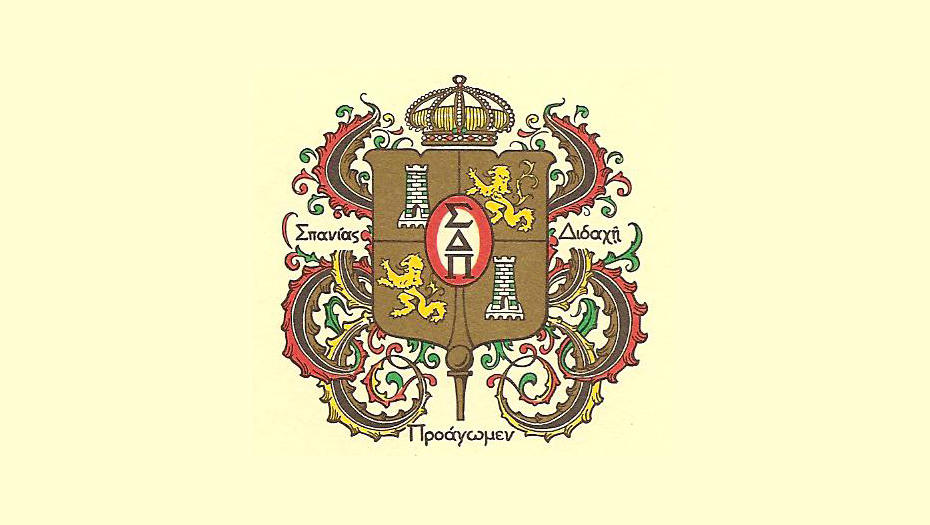 Colgate University’s chapter of the nationally recognized Sigma Delta Pi honor society welcomed thirteen new members at their induction Friday, Oct. 9 in a ceremony that officially re-established the chapter’s presence on campus. Sigma Delta Pi, founded in 1919 at the University of California, Berkeley, recognizes students with outstanding achievements studying Spanish language and literature. Colgate’s Lambda Chi chapter has been inactive for several years, but in Spring 2020, five seniors reactivated it with the goal of further promoting the study of Hispanic culture on campus.

Co-President of Sigma Delta Pi senior Victoria Pino expressed excitement about the re-establishment of the society on campus.

“I was one of five students selected to reactivate the Lambda Chi chapter of Sigma Delta Pi,” Pino said. “We invited the other students based on the national headquarter requirements. There are currently a total of 13 members.”

Pino also noted that there are a number of requirements for membership in Sigma Delta Pi, all of which ensure that the members of the society are among the most accomplished students studying Hispanic culture on campus.

“Each must have completed three years of study of college-level Spanish (eighteen semester credit hours) or the equivalent thereof, including at least three semester hours of a course in Hispanic literature or Hispanic culture and civilization at the junior (third-year) level,” Pino stated. “The candidate must have a minimum GPA of 3.0 on a 4.0 scale in all Spanish courses taken and must also rank in the upper 35% of their class”.

Though any student who has completed at least three semesters of college coursework is eligible for membership, the thirteen Lambda Chi members recently inducted are all members of the Class of 2021.

Though the chapter has just been re-activated, Pino and the other members of Sigma Delta Pi have a lot in mind for the goals they would like the society to accomplish at Colgate.

“We hope to organize activities to further promote the study of Hispanic cultures beyond the department on campus, and also provide a platform in which current students can connect with alumni who also share the same appreciation for the study of Spanish,” Pino said. “We also want to collaborate with other university and student-led groups on campus to promote educational platforms, and we’ll do this through a multifaceted approach that encompasses all the interests of all the members of the society.”

“We were invited into the room in a single file line and asked to repeat the greek words found on the crest of the honor society then asked to sit in marked locations. The professors then followed the national headquarters’ guidelines and read pieces of Spanish literature to us,” Pino said.

Senior and Secretary of Sigma Delta Pi Anna Brown also noted that the ceremony was one that centered around celebrating the great achievements of all new inductees.

“Each of the Professors made it clear how proud they were of everyone and put a lot of effort into making the induction ceremony special for us,” Brown said. “I hope that Sigma Delta Pi inspires students to continue to explore the Spanish language and Hispanic cultures.”

“I was honored to induct these students who have excelled in the study of Spanish language and Hispanic culture and literature. With the participation and support of Professor Perez Carbonell and Professor Zegarra, followed by the necessary safety precautions and responsibilities of approved gatherings of Gate 2, we conducted a ceremony that included both in-person and remote students,” Sandoval Leon said.

The ceremony concluded as the inductees received their official society pin and induction certificate, along with candles and red carnations.

“The candles that we were given symbolize the light we can shine and continue to shine when studying the culture and language of Spanish,” Pino said.