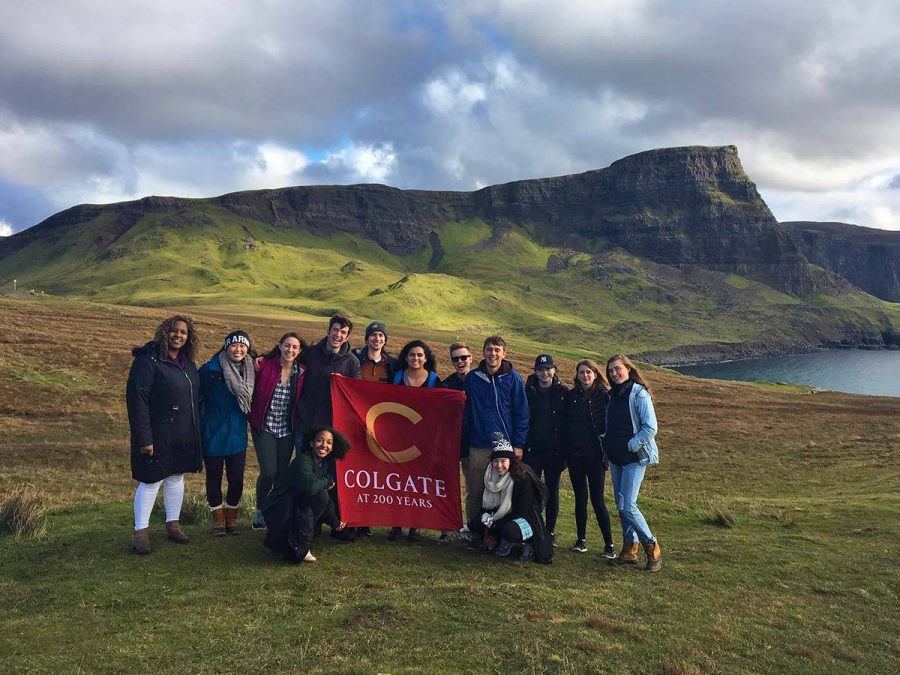 The Office of Off-Campus Study officially canceled all off-campus study programs, including both Colgate-led study groups and approved programs, for the spring of 2021. Citing the global public health situation and its ramifications for international education, the Office released emails on Oct. 9 informing students of the decision.

A wide range of factors influenced the cancellation, Holvey Bowles noted. The continuation of the highest Centers for Disease Control and Prevention (CDC) travel advisories for all of the countries in which programs operate, as well as the existing border closures in some countries and the risk of additional closures posed risks too large for Colgate to run off-campus study programs. Other important factors included the availability of safe housing arrangements, adequate quarantine and isolation spaces and access to sufficient testing and health care.

“This was a very difficult and disappointing decision for all of us, as Colgate deeply values all of our off-campus study programs and the educational and cultural experiences they afford,” Holvey Bowles said. “However, we also strongly believe that this was a necessary decision that prioritizes the health and safety of participants on all of our programs, and recognizes that the student experience studying off-campus during a global pandemic would not afford the immersive cultural and learning experiences that normally make studying off campus such a valuable growth opportunity.”

The Office of Off-Campus Study had been in touch regularly with program providers about protocols and challenges related to the pandemic, according to Holvey Bowles. A number of provider organizations had also begun to cancel participation in some countries, including Australia, New Zealand, Singapore and South Korea.

“Many other institutions of higher education in the U.S. have already reached the same conclusion about the viability of off-campus study programs this coming spring,” Holvey Bowles said. “While a few of the large providers may have small groups abroad in select locations this spring, we anticipate that many of these programs will also cancel in the coming weeks.”

For junior Evie Unger-Harquail, the cancelation came as abrupt.

“I thought it was a bit unfair to cancel all approved programs across the board,” Unger-Harquail said. “I think those decisions should have been left up to either the organizations running them themselves, or to students.”

Unger-Harquail noted that while the preemptive cancellation caused disappointment, it allowed for students to adapt their expectations for the upcoming semester.

“Because approved programs have such a wide variety of locations, I believe those cancellations should have been made on a case by case basis after evaluating the safety and standards of each abroad location,” Unger-Harquail said. “However, I do appreciate that Colgate let us know now, so that we have a lot more time to make alternative plans, instead of dragging it out only to cancel them later.”

Some students had already withdrawn from their Colgate-led study groups. Junior Olivia Geppel, who had planned to join the London English Study Group, anticipated the cancellation of abroad opportunities.

“I knew upon returning to campus that the pandemic would change all of the plans I originally had to study abroad,” Geppel said.

For Geppel, the official cancelation reflects Colgate’s commitment to preserving the health of the student body.

“I think it’s good that they’re being safe and protecting their students from potentially being sent home or being endangered by the pandemic,” Geppel said. “However, this definitely does not change how sad it was for me—and for all of the others, I’m sure—who were planning on going abroad.”

Program managers for Colgate study groups and approved programs contacted all students who had been enrolled in these programs to offer resources to those interested in participating in an off-campus study program in the future.

“Despite the challenges we all have faced, our office remains passionate about the important cultural and educational experiences that a semester off-campus has to offer,” Holvey Bowles said. “It is our deep hope that students will be able to experience all of the benefits from these off-campus study programs during the next academic year. During this pandemic, experiences that promote cross cultural understanding and international cooperation have never felt more important or indeed more necessary.”

While students are encouraged to apply for study groups or approved programs for the upcoming academic year, Unger-Harquail explained that many students have expressed their desire to spend their final semesters on campus.

“I know that I, along with many people in my position, are really hoping that senior year will look a bit more like the Colgate we’re used to,” Unger-Harquail said. “I wouldn’t want to miss a second more of my time here.”