Teams Have a Cracking Time at Rube Goldberg Competition 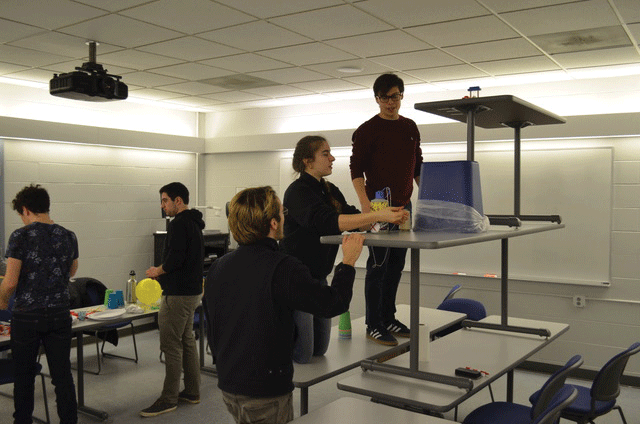 Senior Stephen Paolini and his teammates prepare their machine.

‘Gate Night hosted the first annual Rube Goldberg Contest in Olin Hall from 9 p.m. to 11 p.m. on Saturday, February 24. Rube Goldberg machines are designed using household objects such that simple tasks are linked together to produce a domino effect where one movement triggers the next outcome in the sequence. The objective of the contest was to crack a hard-boiled egg at the end of the Rube Goldberg machine sequence.

Participants included 32 Colgate students distributed into five teams. Each team had one and a half hours to build the machines, and their materials included assigned items such as string, cups, marbles and dominoes as well as anything they could find in the Olin classrooms, such as tables, chairs or garbage cans. Teams were allowed two attempts to crack the egg, and this lenience proved useful; some of the teams’ machines encountered setbacks, but ultimately persevered.

As per the rules, the team with the most successful action steps used to crack the egg would win the prize. Individual action steps include a pulley falling down to push a ball, the ball popping a balloon and the balloon exploding to knock down a lever. Other judging criteria included creativity, use of materials, collaboration of all members and size of the machine – some machines nearly spanned the width of the entire classroom.

There was an incredible incentive for the teams to win the competition, with the first prize award being a $300 dinner gift card to the Colgate Inn and the runner up prize being a $100 lunch gift card to the Hamilton Eatery.

“We wanted to enter because of the prize and because we just wanted to have fun. It’s actually very challenging to build,” first-year Anna Brown said.

The runner-up group was named “Rube Bader Ginsberg.” The first-prize winners, “Bob’s Builders,” consisted mostly of physics students eager to apply their knowledge to the competition.

“As a physics group, we’re having a lot of fun incorporating our favorite subject into an out-of-class activity while being super creative. We saw posters and thought we should enter because we’re passionate about physics,” junior Michelle Tebolt said.

The Rube Goldberg competition was the perfect chance for students to work together to combine innovation and creativity with scientific knowledge and concepts.

“This is the climax of my liberal arts education,” senior Nolan Smyth said.

The event was organized by Center for Leadership and Student Involvement program coordinator Marsha Collett and ‘Gate Night. ‘Gate Night, which has existed at Colgate for three years, is a late-night committee that works to create events that students would enjoy and would engages studentes with the surrounding communities. Previous events have included a trip to watch a musical performance of “The Lion King and Cinderella,” and future events include a “Rockin’ Jump Trampoline Park” trip to New Hartford and an “RPM Go Kart Racing” trip.

“We previously hosted Escape the Rooms and that went really well, so the Rube Goldberg competition was borne out of that. Colgate students designed the escape rooms that we hosted. We figured that people like to do things with their friends rather than just individually, and this seemed like a natural next step,” Collett said.

Overall, the competition was a great way to spend a Saturday night doing something cool and innovative while spending time with friends. Watching the machines run at the end of the night was suspenseful and exciting, and each of the groups and their machines contributed something unique and enjoyable to the competition.

“We wanted to do something that would challenge students’ creativity and problem-solving skills. A competition like this is something that students don’t have on campus right now, so we thought it would be a good fit,” Collett said.