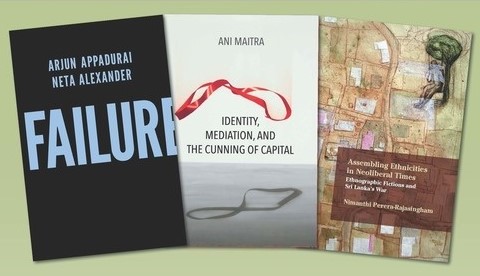 Fall is the perfect time to curl up on the couch with a warm blanket, make a cup of hot apple cider and start reading a new book. Especially during COVID-19, losing oneself in a good book is a great (and safe) way to pass the time. On Tuesday, Oct. 13, the Arts and Humanities Colloquium, which features weekly lectures and insights from Colgate faculty members, celebrated the recent publication of three books written by Assistant Professor of Film and Media Studies Neta Alexander, Associate Professor of Film and Media Studies Ani Maitra and Associate Professor of English and Women’s Studies Nimanthi Rajasingham. Even though this event was originally supposed to occur last March, the outbreak of COVID-19 postponed the event until this past week, where it took place in a virtual format.

The event began with a brief introduction from Director of the Division of the Arts & Humanities David McCabe, who provided thoughtful background information on each professor and then opened the floor for them to speak.

After Maitra gave an overview of his book, Alexander spoke next about her book Failure. Focused on the general theme of failure, Alexander’s book presents a theory about habitual and strategic failure and questions why people are so quick to forgive and forget errors or moments of failure. Following Alexander’s presentation, Rajasingham took her turn highlighting the major ideas of her book Assembling Ethnicities in Neoliberal Times: Ethnographic Fictions and Sri Lanka’s War.

“A central claim of Assembling Ethnicities in Neoliberal Times is that neoliberalism or global capitalism functions ‘as a mobile technology,’ to use Aihwa Ong’s term and that when it encounters the realities of a place, it adapts accordingly. Hence, racism and nationalism have channeled the pathways of global capitalism in Sri Lanka, even as neoliberalism has changed the contours of warfare and nationalism,” Rajasingham noted in her presentation.

After each professor spoke about the key claims and ideas in their books, McCabe facilitated an engaging question and answer session where the professors could either ask each other questions or answer questions from the audience. Based on the questions that were asked, the conversation naturally moved in a direction that addressed the ways in which the professors’ books speak to the present context of the pandemic. The passionate responses given by the professors clearly demonstrated the love and excitement they have for their work.