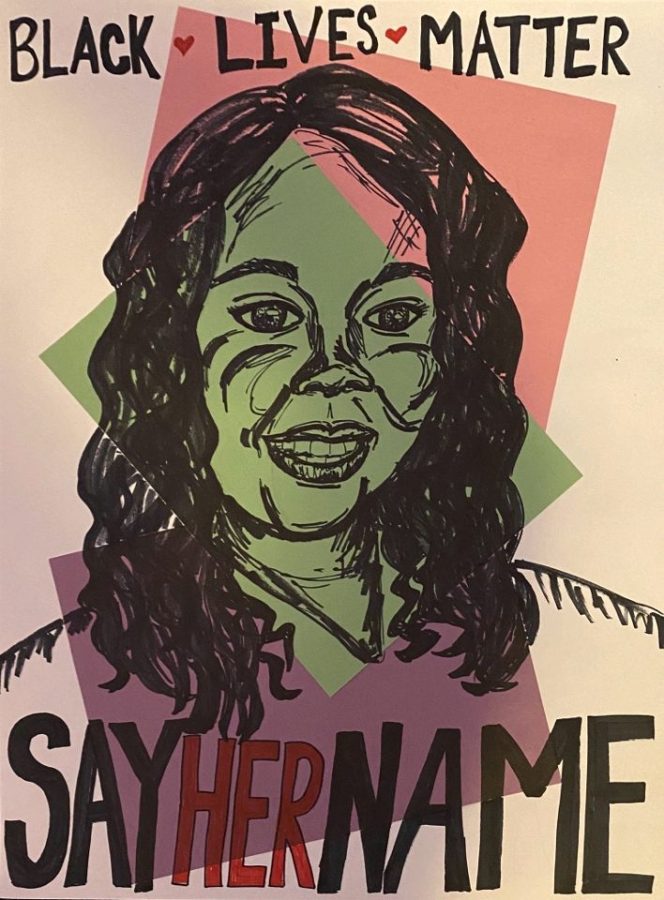 Used with the Permission of Jenny Steele

Breonna Taylor was a 26-year-old Black woman who was fatally shot by Louisville police officers during a raid on her apartment on March 13. The New York Times reported that many people saw this shooting, coupled with the fact that no officers were charged with directly causing Taylor’s death, as further proof that people of color and specifically Black individuals in the United States face violence and discrimination at the hands of law enforcement. Taylor’s death was one of the leading events that sparked the ongoing Black Lives Matter (BLM) demonstrations throughout the summer that continue today. As the issue of racial discrimination, particularly with law enforcement, reaches beyond individual communities, people throughout the U.S. have been finding different ways to bring light to issues they believe Black, Indigenous and People of Color (BIPOC) face. Colgate students and the CSC are no exception.

“We were very disappointed by the grand jury failing to indict all four cops involved in Taylor’s murder and wanted to encourage the student body to protest the ongoing injustice carried out against BIPOC in the U.S. and elsewhere,” Shaw said.

Social media has been a large part of the BLM movement this spring and summer, but some feel that activism must go beyond posting on various platforms.

“Breonna Taylor’s murder and the subsequent leniency for her killers show Colgate University students and the rest of the U.S. population that performative activism is not enough. If you want to be anti-racist it’s going to take more than an Instagram post,” Shaw said.

Due to COVID-19 restrictions, large-scale protests are difficult to be held safely. The organizers held the art protest so that Breonna Taylor’s case and the issues surrounding it could gain attention. The students formed the idea at a CSC meeting where students discussed different ways they wanted to honor Taylor, and many favored making art over Zoom. The art supplies for the event came from Parry’s and were placed into bags for participants. The entire event was on Zoom, with students creating art for about an hour, followed by a small art gallery so participants could share their creations and thoughts. There was little conversation during the event, but participants were encouraged to discuss how to support the BLM movement and Breonna Taylor within their social circles.

According to Shaw, there was also a variety of art that students created.

“People created really beautiful posters and paintings. A few participants worked in a digital medium and were planning to print their creations out and display them. It was really cool to see how creative the participants were and what they could create in an hour with the materials they were given,” she said.

Kaur said that the Coalition has been an important platform for students to discuss issues they’ve long been involved in.

“Colgate students have always been passionate about national injustices and politics, so we are very happy that the Student Coalition is able to provide a platform where students are able to express their frustrations in a productive and creative sense,” Kaur said.

Specific locations on campus coordinated with the CSC to display the art that was made during the protest. The ALANA Cultural Center, Center for Women’s Studies and LGBTQ+ Studies departments have offered to show the artwork. Participants were also encouraged to place artwork in their windows or work with businesses downtown to display them. While organizing protests and events that raise awareness such as this can be difficult due to COVID-19, Kaur remained hopeful about art’s power to spark change.

“When people come back and praise others’ artwork or see it around campus, it will all be worth it,” Kaur said.