Drag King History: From the Tang Dynasty to Today 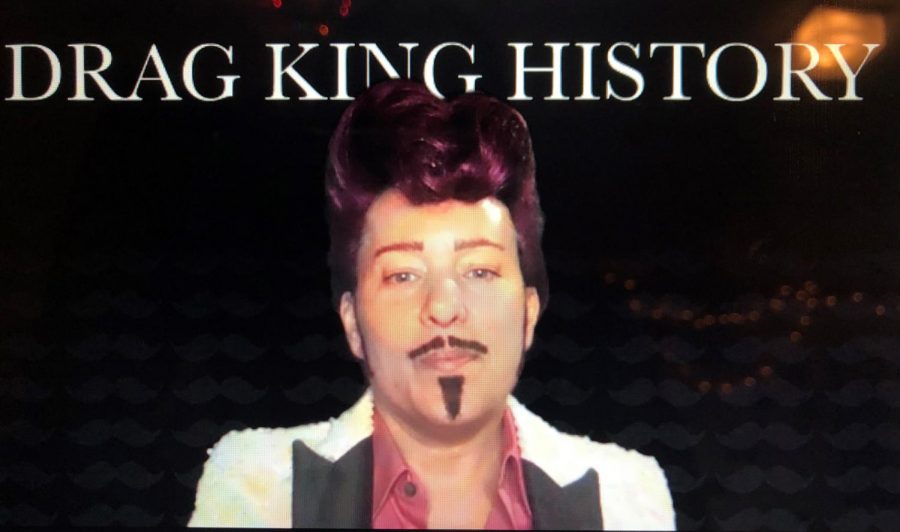 Drag Kings Mo B. Dick and Ken Vegas gave a virtual presentation to a group of Colgate students, faculty and staff about the rich and powerful history of female-born performers dressing in men’s garments for theatrical purposes this past week.

Beginning as early as the Tang dynasty in China (618-907 CE), the art form of male impersonation became more organized and emerged in Chinese opera. Empress Wu Zetian’s impressive and transformative reign influenced this empowered artistry, as she put women in government positions and changed the national religion to Buddhism, which liberated women from strict Confucian rules. In Chinese opera, women played roles from scholars to warriors to emperors by the middle of the dynasty.

Despite the rules of more rigid Confucianism reigns that prohibited women from even watching theatre, contemporary art and poetry reveal that women still defied these restrictions and played male roles in Chinese opera. This rebelliousness was not only confined to this time and place.

Alongside a colorful and thorough slideshow, Mo B. Dick chronicled important figures in the movement from different eras and cultures, including groundbreaking English playwrights Aphra Behn and Susanna Centlivre.

“Both Aphra Behn and Susanna Centlivre brought women’s voices and perspectives into the spotlight for the first time. They utilized their platform to write heroic, dynamic, and autonomous female characters and breeches roles and presented bold topics such as politics and women’s position in society — which women were forbidden to discuss in public,” Mo B. Dick said.

The presentation also commemorated Gowongo Mohawk, the first known impersonator of a Native American male. Mohawk toured the United States and Europe in the late 19th and early 20th centuries in productions that she directed and starred in, and many others such as Gladys Bentley, a Lesbian, African-American, gender-bending entertainer from the Harlem Renaissance.

“There’s so much queer and trans history that has only been shared from person to person, so to have those stories available to more people is so important. It keeps them alive and keeps us connected,” Accessible Technology and Government Documents Librarian Debbie Krahmer said.

Although various sorts of male impersonators have sprouted up and entertained audiences all over the world, their history is largely untold, while drag queens have become more widely recognized as a result of the popular reality competition television series, “RuPaul’s Drag Race.”

Mo B. Dick points to the irony of women still not getting equal representation or stage time even when they dress as men.

“I was inspired to attend the event because drag kings have been underrepresented in the drag shows I’ve seen and I wanted to know why. The presenters, Mo B. Dick and Ken Vegas, talked about some of the reasons for the lack of representation, such as the preference for seeing a more exaggerated style in the queens than the more natural style in the kings,” Assistant Director of Residential Life Amanda Stewart said.

With this current disinterest in more natural or realistic drag, newer Drag Kings like Landon Cider have made their looks more stylized with elaborate costumes and makeup similar to Drag Queens, while others like Mo B. Dick continue to embody “realness” in their appearance. Though it is exciting to see more diverse interpretations of drag, it is disheartening that Drag Kings are not always considered as entertaining because femininity is somehow deemed more performative than masculinity.

“I am embarrassed to say I hadn’t really thought about the disparity in visibility and acceptance before. [Mo B. Dick and Ken Vegas] really opened my eyes to the way in which their work and performance can both be super fun and also can pave the way for everyone around them to feel more comfortable in their own skin,” senior Madison Mixer said.

While raising awareness for the art of male impersonation, this insightful history lesson and Q&A also demonstrated the rebellious innovation and unwavering courage of Drag Kings and their predecessors in an often disapproving world.

“There is so much that drag has to teach us about gender, performance and camp, as well as social critique and subverting norms,” Associate Professor of Educational Studies and LGBTQ Studies and Director of the LGBTQ Studies Program Susan Woolley said.

More information about the history, books and films related to this movement is available on Mo B. Dick and Ken Vegas’ website, DragKingHistory.com.