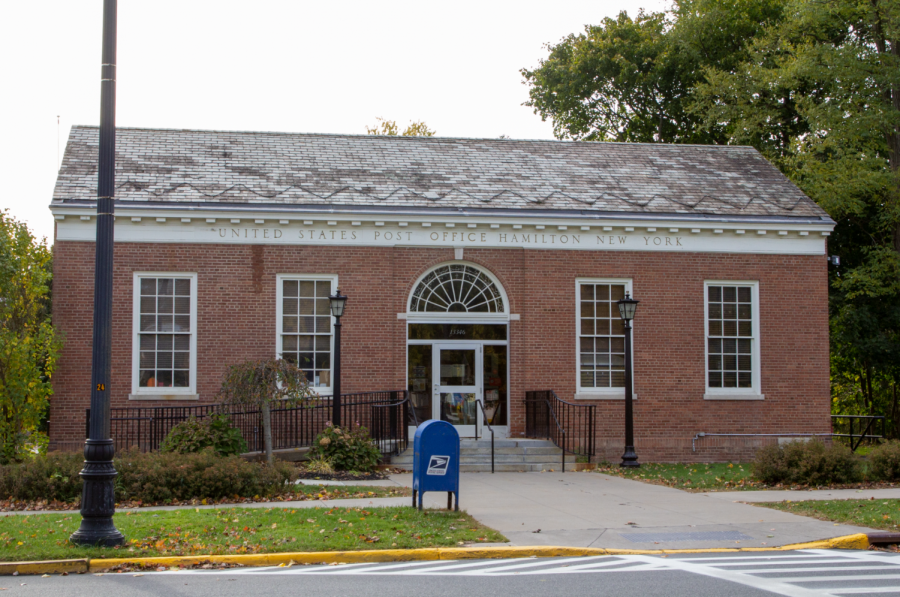 In the midst of the drama caused by the upcoming election and related events, including the debate over the validity of mail-in ballots, voters on campus are having the daunting realization that the voting process has already begun.

The vast majority of Colgate students are registered to vote out of state, and many currently on campus are voting via mail-in or absentee ballots. Junior Riley Decker is registered to vote in Columbia County, N.Y. and said she went to great lengths to ensure her mail-in-ballot would be sent on time.

She is not the only student with concerns about having her vote counted. Junior Ashley Bound, a Lackawanna County, Pa. voter, said that the news regarding restrictions of the postal service and fake ballot boxes spooked her.

“I am really scared my ballot may not be counted because of everything going on right now with voter suppression and limits on the postal service,” Bound said. “I feel like every day there’s something new about fake ballot boxes and removed mail sorting machines; it just all feels like it’s too easy for the current administration to rig the outcome.”

Had it not been for COVID-19 and campus travel restrictions, Bound said she would have driven herself home to vote in-person just to make sure her vote was counted.

Junior Samantha Giuntini, a Fairfax County, Va. voter, said that although this wasn’t her first time voting by mail, the stakes seem much higher in this election.

“Part of [my] anxiety I think was also rooted in all the talk in the news about ballots not being counted or mail-in ballots somehow being linked to fraud,” Giuntini said.

She decided to take extra precautions to ensure that her ballot couldn’t be disqualified on the basis of a small technicality.

“I was super cautious this year… out of fear of [election officials] finding any reason to not count my ballot. The official rules say you can use either a black or blue pen but I had heard that, actually, my state will only count [ballots] if you use black so I made sure to do that,” Giuntini explained.

She also mentioned that, although the requirements for a witness signature had been waived this year due to COVID-19, she made sure a friend signed her ballot anyway out of extra precaution.

“Hopefully there is no reason for my ballot to not be counted unless it gets lost in the mail… or it’s arbitrarily ignored,” Giuntini explained.

Senior Danielle Zarnick, a Spartanburg County, S.C. voter, described the process of filling out her ballot as pretty easy, but she was made uneasy by the fact that people who vote by mail can’t ever really know if their vote was counted or not.

“I didn’t think [requesting, receiving and filling out my ballot] was particularly hard, but it does take a little research to make sure you’re signing up for the right things by the right dates,” Zarnick said. “I definitely do sometimes worry that my ballot won’t be counted, especially because it’s not like a package you’re tracking, you just send it out and have faith it worked. Not knowing if it will work does make the whole process that much more stressful from start to finish.”

Decker shares a similar sentiment regarding her vote.

“Voting by mail feels like a leap of faith; you have to hope your ballot gets where it needs to be in time and that there are no ways it can be discounted,” Decker explained.

“All the confusion surrounding that made me very stressed about the process because I didn’t really know if I was doing the right thing and if somehow I was really messing up. My ballot was issued at the end of September and I got it in the mail a week later,” she said.

Decker, a first-time mail-in voter, said she was very surprised that she had to pay for postage when she mailed her ballot.

“While a stamp is only ¢55, I imagined the ballot would come with free return shipping as it’s my right to vote, and [voting] would be free if [it were] in person. I imagine paying for postage could be a burden to some people. Needing a stamp delayed my postage because I had to find a time in my schedule to go to the post office when the stamp window was open. This could be limiting to people who work during the post office’s hours of operation,” Decker explained.

Students voting in Madison County, N.Y., have an additional voting option that could potentially bypass many of the concerns held by mail-in voters. Absentee ballots can be deposited directly into a designated ballot box located at the Madison County Board of Elections office in Wampsville, N.Y., or voters may bring their ballots with them on election day and drop them off personally to an election inspector. Voters who have already mailed-in their ballots are also still allowed to vote in-person, and their vote will be counted only once just like everybody else.