Cooking Up an Understanding of International Conflicts 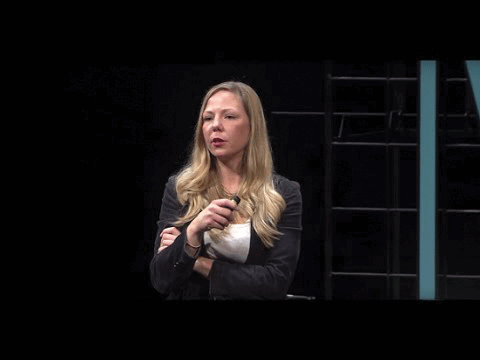 The talk began with an introduction by Assistant Professor of Art and Art History Margaretha Haughwout and was followed by a dinner at Donovan’s Pub. Haughwout stated how Weleski’s art has been featured at the Hammer Museum, the California College of the Arts in San Francisco, the Townhouse Gallery in Cairo and 91MQ in Berlin, and that she is a Stanford University MFA graduate, a recipient of a Curatorial Fellowship from the Andy Warhol Foundation and a resident at the Headlands Center for the Arts.

Co-founded by Jon Rubin and Dawn Weleski, “Conflict Kitchen” is both a restaurant and art-education project that serves food from different countries with which the United States is engaged in conflict. According to the project’s website, each “Conflict Kitchen” project is accompanied by events, performances, publications and discussions to increase public education and spark discussion about different cultures.

Previous art projects that Weleski spoke about include the “Bus Stop Opera Project” in which ordinary conversations with people on the bus turned into lines in operas. In “RV Eatin’,” Weleski and two friends turned an old 1950s-style trailer into a mini restaurant in Pittsburgh. A group of lawyers could interact with a group of fisherman by the river – the restaurant brought people together who otherwise might never have encountered one another. Similarly, “The Waffle Show” provided a restaurant setting with a talk show for customers to participate in while eating.

“Through a meal, you can engage in creating community and meeting folks you wouldn’t typically meet,” Weleski said.

“Conflict Kitchen” uses food to add a human dimension to war and conflict. Each food wrapper features the opinion of Iranians and Palestinians in order for people to read about topics in a more accessible and real way than through TV and media portrayals. The goal is to inspire people to speak out more and to engage in conversations about difficult topics such as the United States’ presence in various countries, foreign perceptions of the United States and family dynamics in times of conflict.

“As you’re tasting the culture, you’re reading about culture and politics, because what is political is personal and vice versa,” Weleski said.

Through food and conversations, “Conflict Kitchen” aims to dismantle propaganda and break down barriers. In the Palestinian food wrapper, there is text directly from the interviews they conducted with Palestinians living in both Palestine and in the diaspora. Topics include creative resistance, Gazan food, psychological impact of occupation, education, economy, states and humor.

“In general, Gazan food is spicy, herby, lemony or sour, piquant, rich, ripe and fresh… Palestinians value education highly. They view it as one of the main aspects of life that they can still control… Palestinians are very lighthearted people. Arabic, in general, is a very playful language,” the interviewees said, as recorded on the wrappers.

Customers can engage in an interaction called “The Foreigner,” where they have conversations with an Iranian through the body of a white Pittsburgh person, or any American. This allows for the layering of gender, political opinion, sexuality and race. In addition to Palestinian, other iteration projects include Cuban, North Korean and Haudenosaunee.

“I found the Conflict Kitchen to be an amazingly unique and effective way of spurring discussion related to U.S. foreign policy and stereotypes as well as generating even a basic knowledge of another culture. After all, like Weleski mentioned, food is something we can all relate to and enjoy,which allows food to be the perfect basis for discussions and engaging with difficult and complicated topics,” junior Audrey Swift said.

The lecture made clear that the project uses food as the seduction to get people to engage with the world around them, in addition to having a better relationship with oneself. It’s all about authenticity through translating experience and stories to the food, while also being responsible to encourage education about different cultures and rapid ethnic diversity in an otherwise stagnant, urban city. It might be necessary to step out of one’s usual community and comfort zone to meet people and learn new stories, but “Conflict Kitchen” shows that it is worth it.