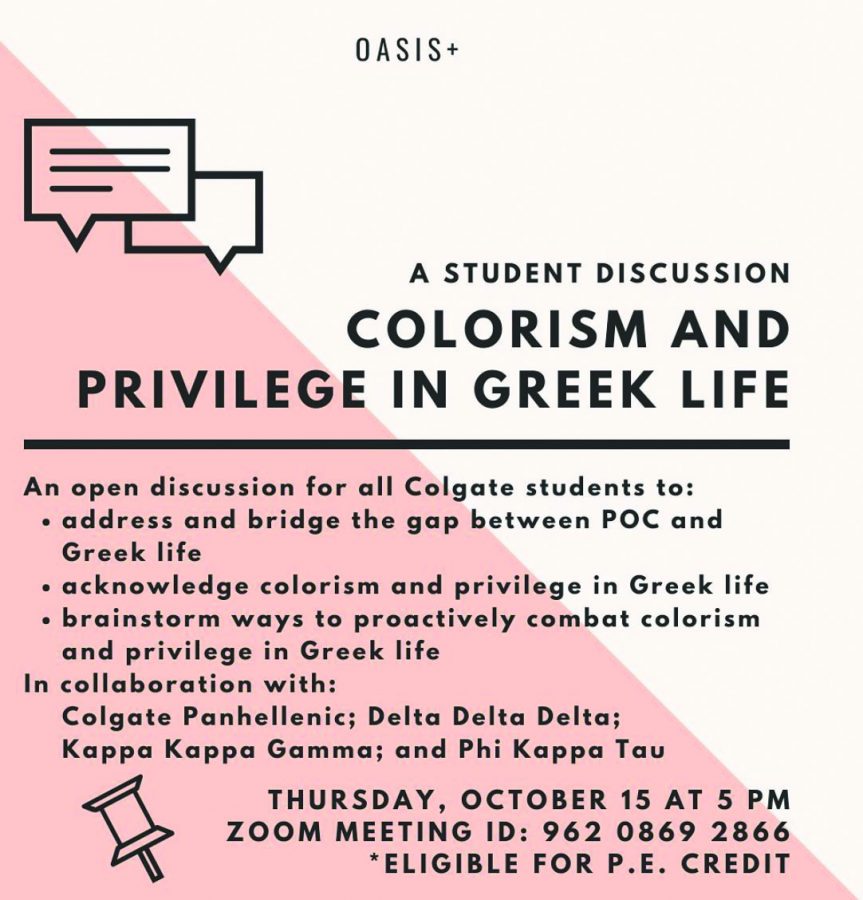 Students highlighted the lack of diversity in this year’s recruitment process and how GLOs need to take an active role in engaging with BIPOC students to help establish a more inclusive community. Co-presidents of OASIS+ and juniors Adriana Kartanadi and Flora Zhang expressed their hopes that this discussion was a good first step towards actual change in Greek Life.

“I think in general, talking about the issues that need to be fixed in your organization is a good start, but it’s not the only thing that should be done. That’s just one of the many things. There actually has to be action that’s taken. And I like that there are [Diversity, Equity, and Inclusion] DEI chairs in each organization. I hope that in the future, these conversations can continue and that some form of change can happen from it,” Zhang said.

Kartanadi pointed out the significance of the members of GLOs who did express themselves, as it allowed for meaningful conversations that question members’ position in Greek Life.

“From the people that we heard, the people who shared their stories and were willing to be vulnerable and kind of point out the shortcomings of their own organizations, I thought that that was really good. And I thought that they were definitely educated in terms of the answers that they were providing, but I can’t speak for people who didn’t say anything,” Kartanadi said.

President of Kappa Kappa Gamma and senior Sasha Balasanov highlighted the need for continuing discussions centered around diversity, equity and inclusion in order for actual change to occur within Greek Life.

“I think what our recruitment chair and our DEI chair mentioned was that every year before recruitment, we have conversations about diversity, equity and inclusion, and then those conversations tend to die out. I think we all recognize that that’s not productive and that these conversations can’t just be happening when recruitment is happening. I think a main focus of ours is figuring out how we can get this to be something that we keep in mind and we discuss. We are finding ways to take action without just having recruitment around the corner, so it’s year-round,” Balasanov said.

Attendance at this discussion was mandatory for members of the Tri-Delta sorority. Senior McKella Sylvester, a Tri-Delta member, hoped that the forum would feature detailed steps that GLOs will take.

“I hoped that there would be more discussion in terms of what we can do next. It was a lot of, ‘it’s happening,’ ‘we’re privileged,’ and everything, but it’s the same old [statements]. It didn’t seem like there were a lot of active approaches. It was pretty silent,” Sylvester said.

Sylvester, who joined the DEI committee within Tri-Delta this year, expressed that fundamental changes in Greek Life are uncertain but hopes that the Interfraternity and Panhellenic Councils will establish new plans, like lowering the cost of dues to make GLOs more financially accessible.

Sylvester commented that several students’ silence during the open discussion was problematic, as many students are not taking an active part in expressing any need to make Greek Life a more inclusive environment for students of color.

“It seemed as though, after the George Floyd protests, a lot of people our age had epiphanies and were finally waking up and educating themselves about racism, colorism and privilege on college campuses. But from how this discussion went, all of that woke-ness disappeared and seemed to have reverted back to a more complacent dialogue,” Sylvester said.

Sophomore Lucy Langan, who is not affiliated with Greek Life, explained that she joined the open forum due to her frustrations with a previous event about racism in Greek Life and hoped that more perspectives on this issue would be present.

“I actually went to a similar event earlier this year. It was run by the Konosioni Senior Honor Society, and I felt like the overwhelming perspective was very Greek-centered. The people running the event were in Greek Life and almost all of the people there were in Greek Life. I remember leaving the meeting a little bit frustrated with that, just because I felt that the perspective of people who didn’t rush, or aren’t involved in the system [of Greek Life] weren’t being heard,” Langan said.

Langan explained the importance of GLOs listening to members outside of the Greek Life community.

“I think, a lot of times, it’s sort of impossible for Greek Life to hold themselves accountable as they’re not listening to the voices that are outside of the system,” Langan said.

She expressed that the abolition of GLOs might be a better option than establishing reformist policies in Greek Life, as many different groups on campus are uncomfortable in the current, Greek-dominated environment.

“It’s counterproductive to work within the Greek system because students have been attempting reform for a while, and nothing substantial has changed. At its core, Greek Life is an oppressive system, and oppressive systems are not reformable. It is more productive to not affiliate and to help build an inclusive community outside of Greek Life so that students do not feel marginalized socially at Colgate,” Langan said.

Langan added that if students want to engage in discussions about abolishing Greek Life, they should follow @abolishgreeklifecolgate on Instagram.

During the open discussion, Sylvester emphasized how students who want to hold themselves and others accountable, but feel uncomfortable doing so, must reflect on why this brings them discomfort.

“I also wanted to add to the conversation of how a lot of unaffiliated students of color have been uncomfortable in primarily upper-class white spaces. I think it may be even more pronounced if you are affiliated [with Greek Life]. Even as a woman of color, as a Black woman, a person from a middle-class background who’s used to these white exclusive spaces… I’m still very uncomfortable being in Greek Life. There are some points when I question as to why I’m even in it. I’m already feeling this as a student of color, and I question whether students, specifically, white students, and those who constitute the majority of Colgate’s population question that themselves and force themselves to be uncomfortable and take actual measures to be held accountable instead of saying, ‘We’re going to do it,’” Sylvester said.

A concern from the discussion’s conclusion was the predominant presence of sorority members compared to low numbers of attendance from fraternities.

“As a board [of OASIS], we would have liked to see more of an even distribution. We did reach out to all of the Greek Letter Organizations… I do think that there’s a problem because there are five fraternities at Colgate and only one of them showed up and collaborated with us,” Kartanadi said.

Sylvester commented that the low numbers of attendance from fraternities affected the themes present in the conversation, as there were not many perspectives from the fraternal side of Greek Life.

“Actually seeing people showing up at events is an important preliminary step for that first step of discussion. It was pretty gender-skewed, which definitely affected the depth of the conversation a lot,” Sylvester said.

Kartanadi and Zhang are hopeful that OASIS+ will continue to have discussions with GLOs to continue conversations about recognizing colorism and creating an inclusive community.

“A collaboration is definitely open, a future collaboration between us, for sure. And I also think, [on the topic of] recruiting more BIPOC students or having more representation in Greek Life, I think that that was one of the goals of the final discussion. But I also think for me, as an unaffiliated student of color on campus, I learned a lot from the event, especially hearing the perspective of Greek life members and how they feel about their organization and how it relates to colorism and privilege and the perpetuation of those issues,” Zhang said.