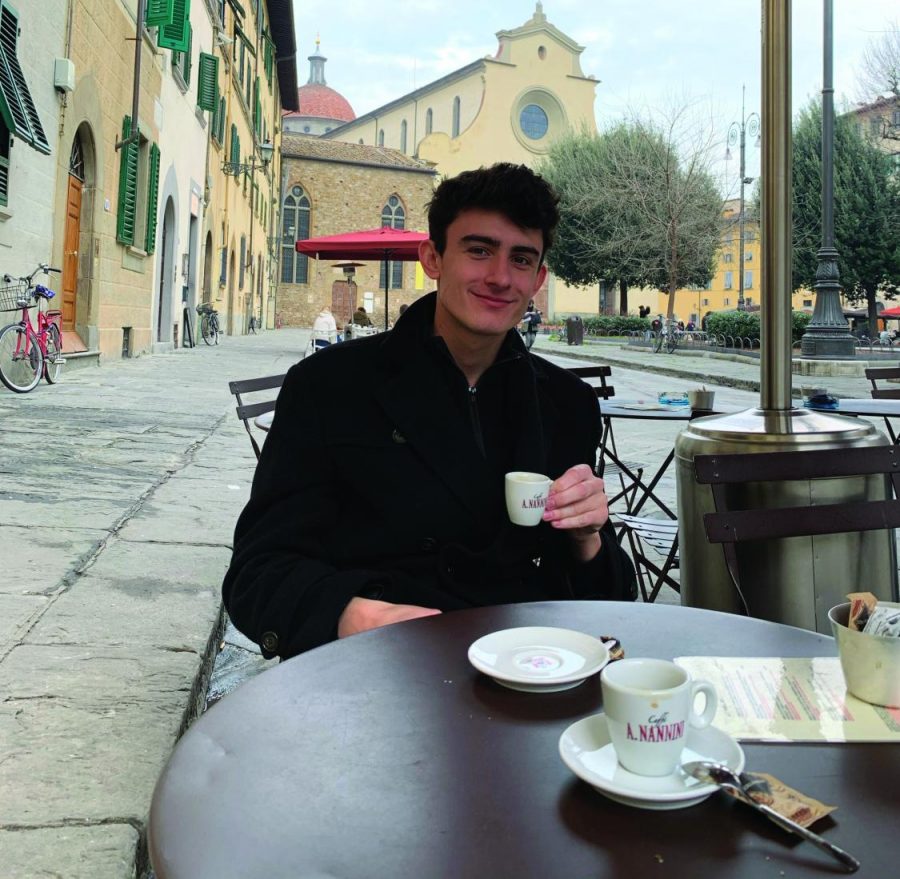 “Do you think you’re funny?” members of Charred Goosebeak, Colgate’s improvisational comedy troupe, asked Griffin Fenady from behind their booth at the University’s club fair. Three years later, he sure hopes so.

Fenady, a senior from Los Angeles, is the president of both Charred Goosebeak and the Experimental Theater Company (ETC), Colgate’s sketch comedy group. Having played two sports in high school — tennis and soccer — he didn’t dip his toes into comedy until coming to college. Upon joining Charred Goosebeak in the first few weeks of his first year, members recommended he try out for ETC as well, and soon found himself immersed in the school’s comedy scene.

The two clubs provide Fenady with different ways to express himself creatively. He calls sketch comedy his “passion,” and has been writing skits since his early days with ETC. Fenady draws inspiration from his day-to-day interactions, finding humor in everyday encounters.

“Anything I see can be a joke or a bit or something, or any sort of awkward encounter I can incorporate into a skit,” he said. “One of the things that I realized after getting to Colgate was how absurd encounters are, everyday, that people don’t even notice. From there, I just kind of tweak them.”

While ETC consists of sketch comedy, rehearsed and prepared shows, improv entails a slightly different creative process. Fenady feels less pressure when it comes to this form of entertainment and sees it as a chance to experiment.

“Improv allows me to just be sillier, to test the boundaries more and see what works, because everybody knows it’s coming off the top of your head,” he said.

Fenady sees the biggest difference between the two clubs in that he always gets nervous before doing an improv show, and never does before sketch comedy shows. No matter how much he practices before, the nature of improv means that he’s always thinking of jokes on the spot, and not knowing what anyone else is going to say presents another variable — “for the most part, it’s completely outside of your control,” he noted. Off the stage, Fenady sees both forms of comedy as valuable in different ways.

“I feel like they both have elements that I really love, because the skills of improv are potentially more useful in day-to-day life than in sketch comedy, because I can always think on my toes and think of something to say now,” he said. “Sketch comedy is more thinking of ideas and executing them well, with a lot more thought.”

When he’s not in the Creative Arts House basement trying to get a laugh out of people, Fenady is concentrating in both philosophy and film and media studies. He’s also a member of Phi Delta Theta fraternity, but Fenady calls his involvement in both comedy groups the most defining part of his college experience.

“It’s still, arguably, my favorite thing by far about Colgate — those two clubs,” he said.

In terms of plans beyond Colgate, Fenady’s experiences in comedy have pushed him in a creative direction, particularly considering his affinity for writing. On the academic side, his study of film led to three summers working on movies as a production assistant in Los Angeles.

Fenady finds that his involvement in comedy, beyond pointing him towards writing and content creation, has more than anything bolstered his confidence. Naturally introverted, “even though it doesn’t really seem like that to a lot of people,” Fenady says that this part of his Colgate experience has pushed him to be a lot more outgoing and open.