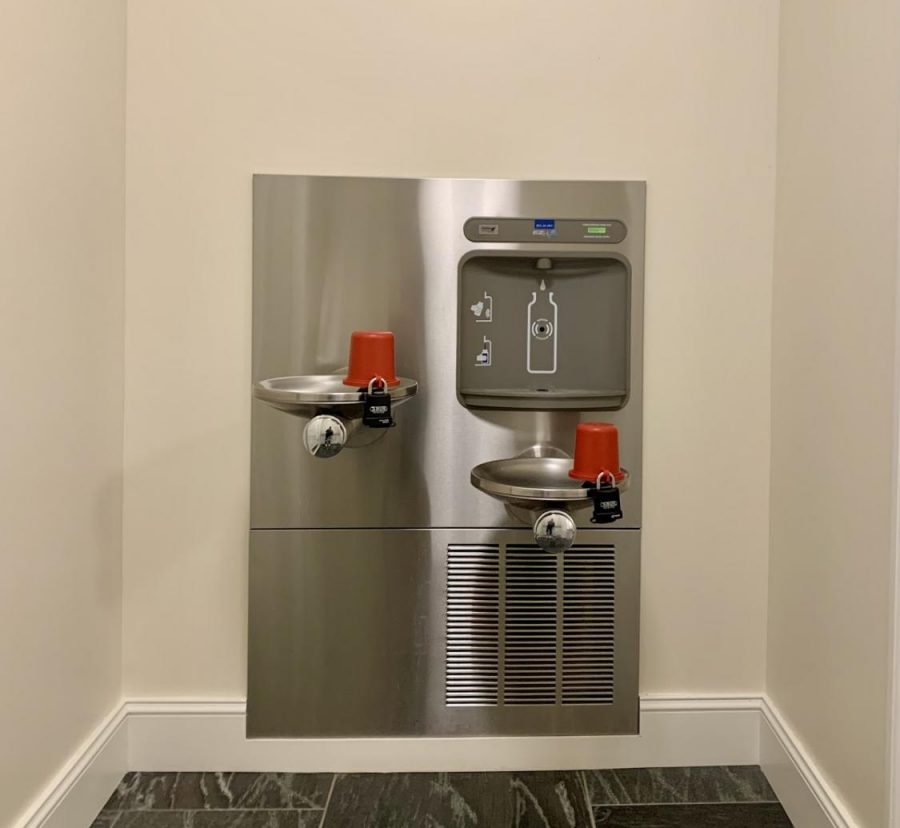 Water fountain spigots in uphill residence halls and academic buildings have been covered with red caps in part of the next step of virus-prevention methods on campus. At the conclusion of the project, completed by the Facilities Department, water fountain spigots, both those paired with and independent of a bottle filling mechanism, will have been turned off or blocked to avoid the spreading of the virus.

Director of Facilities Operations Jason Wallace notes that this project began prior to student arrival with one of the types of water fountains on campus.

“Before students were even on campus, our team went around to turn off all of the stations that we could to prevent students from putting mouths on the same surface. Some have been off since then, but the new red pieces act more like signage to make sure people know that they will not be able to get water here,” Wallace said.

Water fountains that contain a bottle filling station in the same unit, like those found in Burke, Pinchin and Benton Halls, are not able to have spigots turned off without turning off the bottle filler, which Wallace stated was something that needed to be kept on so that students had the ability to fill their personal water bottles and cups.

“We’ve been in the process of installing these around the campus. We initially ordered 3-5 of these units to sample them, seeing if they were easy to install and made sense for the project. Now, we’ve pretty much finished installing them on the entire campus,” Wallace said.

Some residents were initially surprised at the installation, which was not promoted by signage or messages from the University or from Community Leaders. When Community Leaders were asked of their knowledge of this project, they declined to comment.

Students have expressed a sense of inconvenience and slight confusion with regard to this new project. Sophomore Ellie McDermott, a Burke Hall resident, says that she understands the importance of shutting off the water fountains, but does not understand why some just appeared now and why students were never alerted prior to their installation.

“I think covering the water fountains may have made more sense back in Gate 0. Also, I didn’t really think many people were drinking out of the fountains in general because I think most people knew that was a good way to spread the virus” McDermott said.

According to Associate Vice President for Campus Safety, Environmental Health and Emergency Management Dan Gough, the project was done in a strategic way to not block all water access for students in residence halls.

“The fountainhead covers were used, as opposed to closing the water valve, so that building occupants could still have access to touchless bottle filling stations (that, unlike shared use of the same fountainhead, does not facilitate potential disease transmission).  These were installed at the gym/fitness center areas before reopening,” Gough said.

This project was part of a larger set of COVID-19 preventative measures taking place around the campus, including the turning off of hand dryers in bathrooms in residence halls and academic buildings, according to Wallace.

Wallace says other, less obvious improvements have also been installed since student arrivals such as air purification in all enclosed passenger elevators. All of the measures are important for virus prevention, and he thanks students for their commitment to keeping the campus safe and open.

In addition to keeping students safe, he also recognizes that student input has been valuable in the Facilities Department’s overall effort.

“One student contacted us about a different cleaning technology we could be using, which we investigated, to see if it was something we could use moving forward. We’re doing research to see what is the best course to help the University as a whole be COVID-free,” Wallace said.