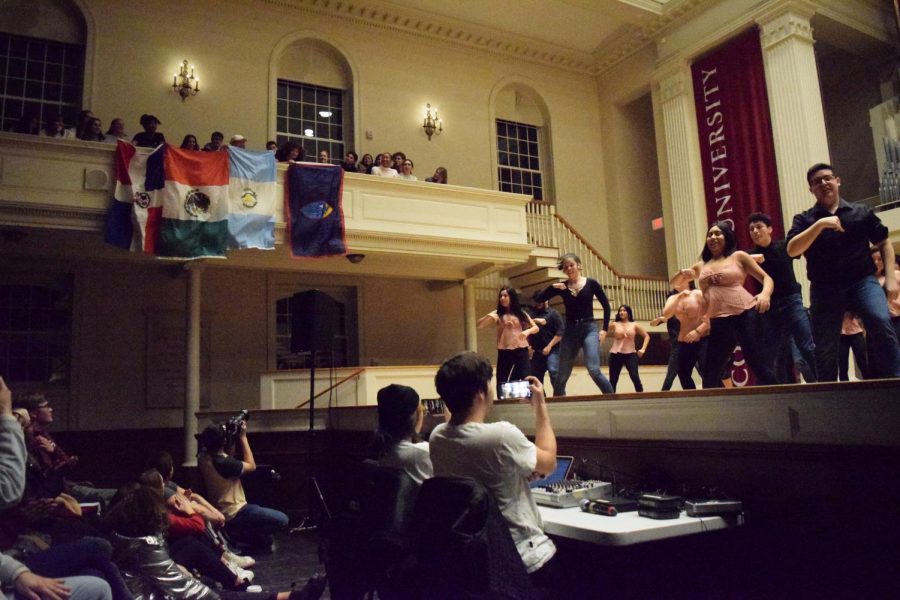 Colgate’s Latin American Dance Club (LAD) describes itself as a group that “prides itself on cultivating a fun, creative outlet for students, having an enriching environment for self, artistic and cultural expression through dance and building long-lasting relationships with those in the community” on their Get Involved profile. Its co-presidents are Nataly Zarzuela, a sophomore from New York who is intending to concentrate in physics, and Kathy Bertrand Ortiz, a sophomore from Arlington, Va. who is concentrating in psychology. Both are Office of Undergraduate Studies (OUS) Scholars, and both came to campus knowing that LAD was something they wanted to be a part of.

“When I came on accepted students day one of the fair tables was Dance Fest, and it was something I was super interested in because I danced in high school,” Zarzuela said.

Ortiz was similarly exposed to LAD at an accepted students event.

“Chelsea Santiago ’19 was there socializing with the prospective students and she was talking about LAD and how that was a big part of her time at Colgate. Dancing has always been a part of my life. I’ve never been a part of a dance group or anything, but I’ve really enjoyed it ever since I was very little,” she said. “When I did decide on Colgate I knew that was the one club that I wanted to be in.”

“[Small group] is more specialized in a certain genre of music, a little more advanced and choreographed,” Ortiz said.

Large group has just as much appeal, however.

“Large group is just as fun though, because like, we go crazy,” Zarzuela said, laughing. “In LAD there is no hierarchy; we were all on the same plane… From the beginning, we were able to be cool with the seniors.”

Ortiz echoed the sentiment, adding that their dedication to the group led to their respect within it.

“[Zarzuela] and I were very engaged in everything that had to do with LAD. We barely ever missed a meeting. I think that is what [the previous leaders] saw in us,” Ortiz said.

Both students felt it was easy to give time and energy to the group because it was such a safe space.

“We were a part of something we had never done before. [LAD] has definitely been a place where I can be myself, more than usual…  [Ortiz] can attest to this,” Zarzuela said. “Because dancing makes me so happy, anytime I was at LAD, no matter if it was Saturday morning, no matter how long it was, I was always happy because I was with my gang.”

Ortiz added on to this sentiment of community.

“In a predominantly white institution, being in a space where I can identify with the people I am with, doing the things I love and just being able to express myself through dance is one of the most important things about [LAD],” Ortiz said.

Before COVID-19 shut campus down last year, Zarzuela and Ortiz had just finished their first fall DanceFest and were beginning to prepare the members of LAD for the one at the end of the spring semester. “We were like, ‘Oh my god we can’t wait for DanceFest,’ this is going to be what we look forward to every semester,” Zarzuela said. “The day before [DanceFest], all of the groups present to each other first, basically to get a feel for the performance, and that was one of the most beautiful things I have seen in my life. Dancing from all other cultures… it was just a wonderful experience.”

As presidents, Zarzuela and Ortiz are the primary choreographers for both the large and small LAD groups.

Zarzuela also wanted to expand the scope of Latin American dance incorporated into the group’s routines.

“We are called LAD, but watching the old DanceFests we saw predominantly music from the same cultures. For example my country, I am from the Dominican Republic which is where Merengue, Bachata and parts of Salsa come from as well as other parts of the Caribbean and Latin America. But we wanted to make sure that other Latinx identifying people were able to see their music and their styles, not just the dominant ones because that defeats the whole purpose,” Zarzuela said. “It was also amazing to educate those who do not identify as Hispanic or Latinx. We had so many people who thanked us for accepting them, and we really never thought about it like that… We were just like ‘Ok, we are going to welcome you into this community and show you how we grew up dancing and what we grew up listening to.’ We just wanted to share that with Colgate and anyone else who would want to learn and appreciate what we grew up doing.”

Since plans for Dance Fest are up in the air for the fall of 2020, Zarzuela and Ortiz have had to reconfigure their approach to leading LAD.

“Right now we are just trying to make sure that people still have a space on campus where we can just talk and chill… we didn’t want to completely get rid of it this semester so we could keep our community alive,” Zarzuela said.

Ortiz agreed with this.

“We wanted to make sure the [first-years] would have a way to know what LAD is, so when spring semester comes they will know about it,” she said. “There are so little Latinx groups on campus, so us being able to keep up with everyone and still participate as a club is very important.”