ALANA Cares: Tools to Develop Your Road Map for Thriving 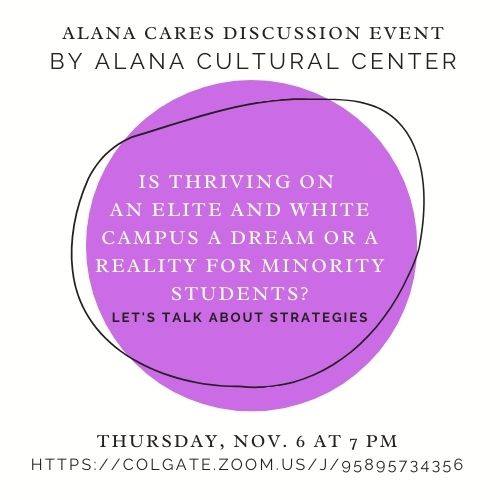 Building community and developing the tools to thrive on campus and in the world at large has never been more important. A recent virtual event, hosted by the ALANA Cultural Center as a part of the ALANA Cares event series, occurs on the first Thursday of every month. Featuring special guest speaker alumna Autumn McKenzie ’97, last Thursday’s event incited a lively conversation built around the experiences McKenzie shared about her time at Colgate, lessons she has learned throughout her life and advice for current students.

The event began with a brief introduction from Esther Rosbrook, Director of the ALANA Cultural Center, who shared background information on McKenzie. Rosbrook highlighted that McKenzie was a neuroscience major and a member of the women’s volleyball team while she was a student at Colgate. After graduating, McKenzie attended Duke University where she received her Master of Health Science and Physician Assistant training. She currently practices Emergency Medicine at Johns Hopkins Emergency Department. In 2017, McKenzie began a blog inspired by her realization that life is too short. She is now motivated to share her story with others in order to remind people to make the most of every moment and to embrace change.

With hopes of making this event very personal and engaging, McKenzie kickstarted the discussion by first asking everyone on Zoom to introduce themselves and to share their motivation for attending. By inviting everyone to speak, McKenzie made the participants on the Zoom call feel connected despite not physically being together. McKenzie then gave an overview of her life story and shared a few key lessons that she has learned over the years.

For example, McKenzie expressed that the developmental years of her life occurred while she was a student at Colgate. Athletics had always had a big influence on her. Being a member of the women’s volleyball team on campus was an invaluable experience because it taught her how to endure and overcome hard situations. She explained how oftentimes when people exercise, there is an expectation of pain. By strenuously working out, a person will inevitably be sore the next day and will have to endure a temporary period of discomfort. However, once this physical pain ultimately resides, a person will feel stronger than they did before they worked out. McKenzie was able to take this realization and apply it to her life as a whole. Whenever she is presented with a tough situation, McKenzie is able to get through these tough moments by reminding herself that these experiences will ultimately make her a stronger and better person.

Another lesson that McKenzie learned was that urgency and intention have to be aligned with your goals and aspirations for the future. Life can be very daunting in the sense that it is uncertain and unpredictable. However, McKenzie argues that life becomes less scary when a person can identify a future goal and outline the specific steps they need to take in order to achieve that goal. By having a sense of urgency and actively taking small steps towards reaching a goal, a person’s life can become more purposeful and meaningful. McKenzie encourages students to take advantage of Colgate’s numerous resources to help them create a plan for the future.

The final thoughts McKenzie shared toward the end of the event included the importance of building community and learning how to mentally thrive. Especially during COVID-19, where social distancing guidelines are enforced, creating a sense of community is incredibly important in order to feel less isolated. McKenzie encourages students, now more than ever, to proactively reach out to friends, family or Colgate alumni and to take advantage of digital resources to connect with people from far away. Lastly, McKenzie believes that everyone can thrive mentally so long as they keep a motto akin to “I got this” in the back of their mind.