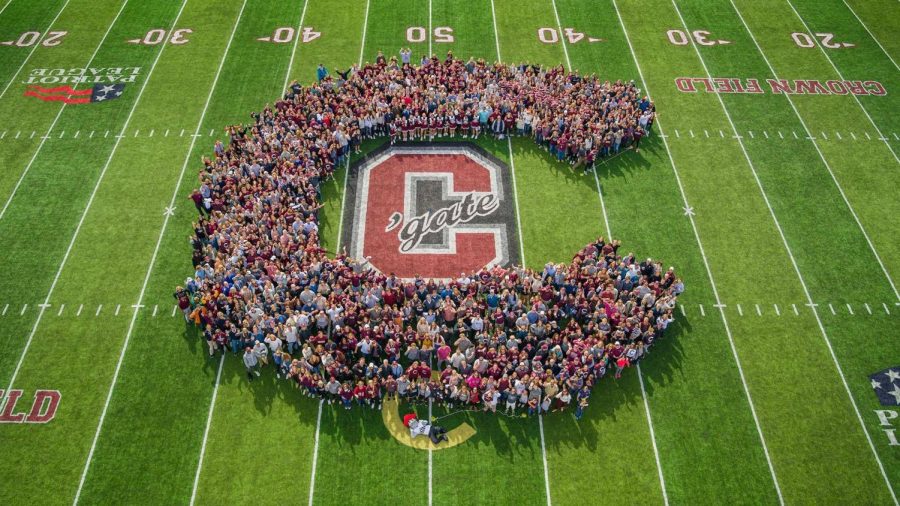 Colgate was founded in 1819 by 13 men with 13 dollars and 13 prayers, who set down 13 articles for Colgate’s constitution. The articles written for the Baptist Education Society of the State of New York, have since transformed into Colgate University, but our penchant for the number 13 has endured. To celebrate this year’s Colgate day, read about 13 thirteens from Colgate’s history and lore.

13 men: Jonathan Olmstead, Joel W. Clark, Nathaniel Kendrick, Charles W. Hull, Daniel Hascall, Samuel Payne, Elisha Payne, John Bostwick, Thomas Cox, Samuel Osgood, Amos Kingsley, Peter Philanthropos Roots and Robert Powell.
13 dollars: Each individual paid a membership fee of one dollar. Adjusted for inflation, each membership fee would be around 20 2019 dollars today. (Someone make a petition to bring back these tuition rates!)
13 prayers: Each signatory offered a prayer for the fledgling institution of religious instruction. They likely would have said the Lord’s prayer and added thoughts about guidance and wisdom.
13 articles: Colgate’s constitution laid out rules for the organization of the seminary.
13 Goals of a Colgate Education: The 13 articles have since become 13 goals of a Colgate education, which aim to prepare students to be critical thinkers and global citizens.
13 Letters in Our Motto: DEO AC VERITATI meaning “For God and truth” is actually older than the name Colgate University. This motto was chosen in 1846, for the seal of what was then called Madison University.
13 Oak Drive: If you have ever navigated yourself to campus, or mailed something to a campus address, you will be familiar with this one! Colgate is located at 13 Oak Drive.
13346: The first two numbers of our zip-code are 13, and the remaining three numerals sum to 13.
One out of 13 Dinosaur Eggs: The dinosaur egg on display in the geology museum in the Ho Science Center was one of 13 discovered on July 13, 1923 by George Olson. The expedition was sponsored by Sidney M. Colgate who was the President of Colgate’s board of trustees at the time. In addition to later lore, this fossilized egg is actually one of the first-ever discovered and helped prove that dinosaurs laid eggs.
13 Steps: Speaking of eggs, the architects of Alumni Hall decided to hide an easter egg within the stairwells. Between each floor in Alumni are 13 steps! Count them on your next visit to the Longyear Museum of Anthropology.
13 Adirondack Chairs: The lovely Adirondack chairs are a new addition to campus. These 13 chairs were completed in 2017 by Sherburne-Earlville High School students.
Hidden 13’s around Campus: Once you have started to recognize 13’s around campus it will be hard to stop! The 13 yard line is marked on the football field and the ironwork on the Academic quad has multiple hidden 13’s.
Baker’s Dozen: Last but not least, this section was named for our lucky number as well! A Baker’s Dozen refers to 13 of something, and this section is designed to shine a spotlight on the Colgate community and what makes it special.