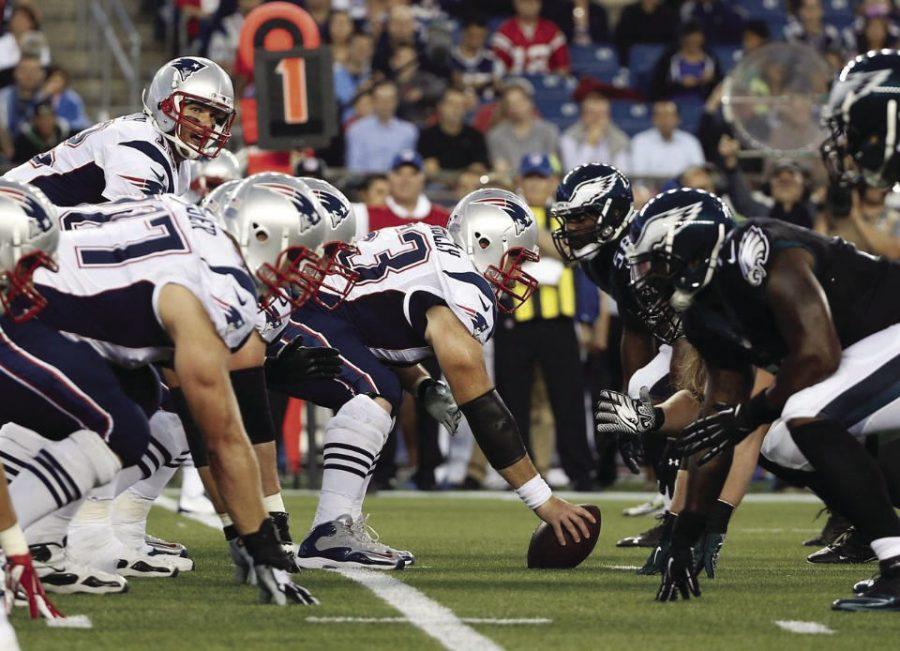 While the Philadelphia Eagles have no Super Bowl titles in their franchise’s history, Tom Brady is going for his sixth ring. Brady and the Pats beat the Eagles in Super Bowl XXXIX 24-21 in 2005, but the Eagles are looking for revenge this time around. Nick Foles hopes to become a Philadelphia legend and dethrone Brady.

New England cruised through the regular season and took the path of least resistance in the playoffs, crushing Marcus Mariota and Blake Bortles. Philadelphia had a tougher road, made even more challenging by the devastating loss of star quarterback and mythical hero, Carson Wentz. Enter Nick Foles, a former starter turned career backup. So far, he has managed to outduel Matt Ryan and Case Keenum, but Tom Brady is a different animal entirely.

The G.O.A.T. may be the most clutch quarterback in NFL history. Will the oppressive dynasty continue or will a new reign take over? Tom “Terrific” Brady or Nick “Napoleon Dynamite” Foles? Find out below in our ridiculously biased Super Bowl LII preview!

Why Teddy Thinks the Patriots Will Win:

Nobody outside of New England wanted the Patriots in this Super Bowl. America is sick and tired of seeing Brady and Belichick crush dreams year after year. The Eagles, despite their insufferable fans, are fan favorites due to their backup quarterback and their Super Bowl-less history. But everyone is about to be disappointed yet again.

Let’s start with Brady. He’s widely considered the Greatest of All Time. Statistically, he’s the best playoff and Super Bowl quarterback in history. He holds records for most appearances, wins, touchdowns, and passing yards in the playoffs and Super Bowls. With the game on the line, Brady plays his best. Fans of both the Seahawks and Falcons know this all too well.

Perhaps even more critical to New England’s success is head coach Bill Belichick. “The Hoodie” has had the good fortune of coaching Brady throughout his career, but he has been far and away the best coach in the league for over decade. None can compare to his success and longevity.

But a football team is made up of more than just two people. A stellar quarterback and head coach duo still need exceptional talent around them to succeed. The Patriots have this in spades. On the sidelines, offensive coordinator Josh McDaniels and defensive coordinator Matt Patricia both earned head coaching positions next season. If you can name one of the Eagles coordinators without Googling them, I’ll be seriously impressed.

Brady doesn’t have to do everything himself on the field. The running game has been potent all year, with Dion Lewis and James White running circles around opponents. Danny “Playoff” Amendola and Brandin Cooks are impossible to shut down.

Rob Gronkowski got concussed last week, but if he’s healthy he’s the best tight end in the NFL. Eagles fans better hope that going from 11 to 10 brain cells is enough to keep him out of the game.

I haven’t yet addressed the Patriots defense. The idea that the Patriots have a weak defense is pure speculation. Opponents averaged 18.3 points per game, good for fifth in the NFL and only one point worse than Philadelphia’s second-ranked defense. Malcolm Butler and Devin McCourty, in what will likely be their last game  together, will be out for blood.

For the record, I think the Eagles are a good team and that it will be a close game. But their quarterback right now is Nick Foles. Only the most delusional Eagles fans believe in him to come through in the clutch (looking at you, Brian Rose).

This game will come down to the last few minutes of the fourth quarter, Brady will outplay Foles, Belichick will use Jedi mind tricks on the Eagles coaches, and the big bad Patriots will win their sixth Super Bowl.

Why Brian Thinks the Eagles Will Win:

Go ahead, please. Keep on doubting the Philadelphia Eagles.

Nick Foles was on the verge of retirement less than two years ago. Doug Pederson was considered a weak hire as an NFL head coach in a year that included hirings of Ben McAdoo and Chip Kelly.

All of a sudden, our low life backup quarterback and underqualified head coach have the greatest city on earth one win away from destiny – and here’s how they’ll capture it.

We saw Atlanta try to do just that, but when the rubber met the road, their defense was pummeled by the juggernaut New England offense. To beat the Patriots, the game needs to be kept at a slower pace, grinding the clock and keeping the ball out of the hands of the prima donna, health nut walking the opposing sideline.

On offense, the Eagles need to run the ball effectively and, in turn, control the clock. Jay Ajayi, acquired in a midseason trade with Miami, has been extremely effective when he has had the ball in his hands. The Eagles have been conservative with his workload, though, keeping him under 20 carries in every game he has played, instead opting for a more committee style approach to the running game.

Against the Pats, they’ll lean on Ajayi to punish New England’s front seven and wear down a mediorcre Patriots run-defense as the game goes on. The whole world saw what Nick Foles was capable of in the NFC Championship game, when he absolutely shredded the best defense in football. In the Super Bowl, he simply needs to be a game manager, convert third downs and keep drives moving. Foles has been getting better and better each week, and I expect Saint Nick to make good decisions. Specifically Foles must get his star receiver, Alshon Jeffery, involved early and often.

Defensively, the formula for success for the Eagles is much simpler. Their defense has relied on rushing four linemen all year and effectively getting to the quarterback without blitzing. They need to do just that against Brady and this Pats offense, allowing their linebackers and safeties to help in coverage. Expect to see Brady under heavy pressure throughout the game.

Philadelphia’s depth of quality pass rushers has allowed them to torment opposing quarterbacks all year, especially quarterbacks who aren’t the most fleet of foot …cough, cough…Tom Brady. Malcolm Jenkins will get plenty of time covering the sasquatch they call a tight end, and the defensive line, led by All-Pro Fletcher Cox, will pummel Brady early and often.

This will be a tight game throughout, but look for the Eagles defense to come up clutch in the fourth quarter.

New England idol Tom Brady’s tomato-less diet won’t help him here, and the hopes and dreams of arrogant Pats fans will come to an abrupt end (Sorry, not sorry, Teddy).  The Eagles will bring the Lombardi Trophy home and bring a parade down Broad Street.