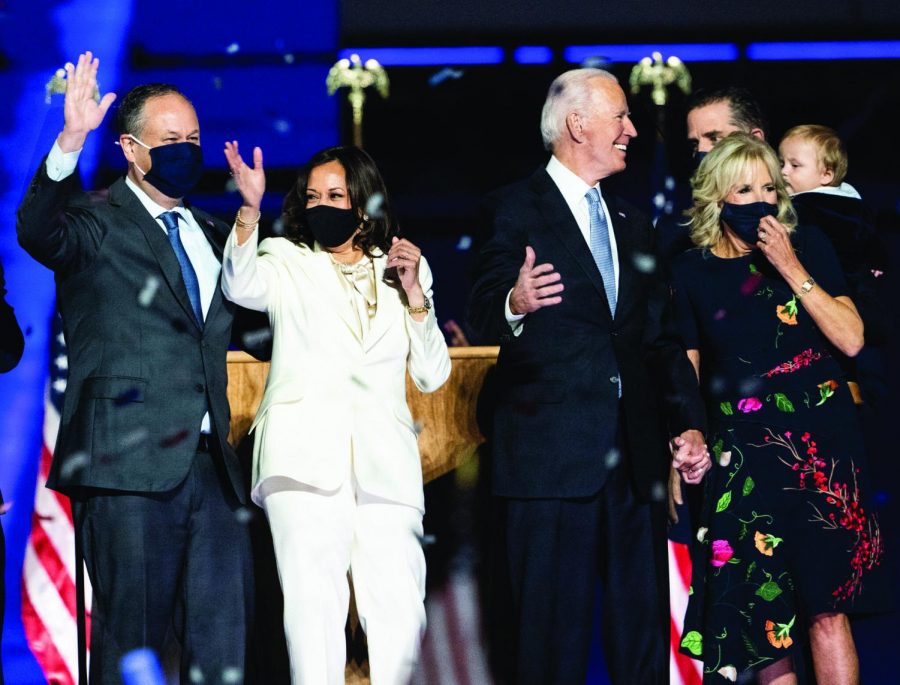 After four days of counting votes following Election Day, Democratic candidate Joe Biden clinched the threshold of 270 Electoral Votes by winning Pennsylvania on Saturday, Nov. 9 and was declared the 46th President of the United States. As Vice President-elect, Kamala Harris made history by becoming the first Black, first South Asian and first woman to be elected to this office. Estimates report voter turnout to be roughly two-thirds of the citizen voting-age population, which has not been this high since 1900, according to Time.

President of the Black Student Union and co-President of Brothers, an organization dedicated to representing men of color and individuals of socioeconomically challenged backgrounds, and senior David White explained how these organizations emphasized the importance of voting.

“Both BSU and Brothers have had meetings on voting and the importance of voting. Especially, in BSU, how our ancestors literally died for us to have the right to vote. And so we raised the significance of voting, but also knowing how to properly vote. [We discussed] how to do the research to see which candidates, in their policies and platforms, are more in line with helping communities of minorities and people of lower socioeconomic status, and that people who are of lower socioeconomic status are able to get the help they need,” White said.

White explained that Harris being the first woman and woman of color elected to the vice presidency is an achievement long overdue.

Senior Vedika Almal cited the significance and high stakes of several policy issues as reasons for the rise in voter turnout.

“People’s lives and so many important things were on the ballot. Specifically with Roe v. Wade, abortion rights, immigration and health care. These things affect so many people on a daily basis. So, I think people really stepped up and came out to vote,” Almal said.

“If you look at the polls, we lost badly in rural areas. That speaks to a broader point that I am very concerned about. That is the Democratic brand, and the Democratic messaging that the party currently has. That is something that needs to change, starting now, before 2022 [congressional midterm election],” Cleland said.

“We are trying to be optimistic about the courts because there are a lot of lawsuits and proposed allegations of fraud [by the Trump administration]. But we’re not too optimistic on that actually changing the results of the election,” Darcy said. “Obviously, we’re going to accept the results, but it’s not as great as we hoped it’d be.”

In the race for congressional seats, Democrats will still hold a majority in the House of Representatives, but Republicans managed to flip four additional seats last week.

“In terms of congressional races, I think that female GOP candidates ran and won at the highest rate that’s ever happened before this year, so we’re really excited about that,” Darcy said.

On the Democratic side, Cleland argued that the rhetoric of Democrats needs re-phrasing on certain issues to be more appealing to voters, specifically regarding the slogan for defunding the police.

“[Defunding the police] was always going to work against us, and Republicans took full advantage of that. A better phrase might be, investing in our communities. You’re still talking about the same thing. You want greater community control over what your law enforcement agency is doing. You want to be able to root out systemic inequities that exist in the law enforcement system, but you’re not calling for the defunding of our police force,” Cleland said.

Described by media outlets as the “red” and “blue mirage,” a trend in this election depicted a shift in swing states initially showing Trump or Biden leading before eventually favoring the opposite candidate.

“I don’t know if Trump got as much support from the coal industry as he was expecting. Trump was heavily expecting coal mining and blue-collar workers to pull him through in Wisconsin. In Michigan, I was disappointed with how poorly Trump did there since he had a large lead-up at first. But I always knew that mail-in ballots would eventually catch up,” Griffin said.

Senior Katie Brunell explained that on election night, the “red mirage” in Wisconsin and Michigan was stressful to witness.

“It was really scary to see all these states go red. It’s been weird to watch this over the last few days, so it’s something to think about going forward if this is what elections are [going to be] like,” Brunell said.

Brunell, who’s from Minnesota, argued that the Democratic victory in her home state is a direct result of the close margins between Trump and former Democratic candidate Hillary Clinton in the 2016 presidential election. Trump lost to Clinton by 1.5%, according to The New York Times. In this election, Biden won against Trump by a wider margin of 7.1%.

“In Minnesota, there’s the perception, like in New York, that if you’re not voting for a Democrat, it doesn’t matter because the state’s going to go blue anyways. So I think because Trump was so vocal in trying to make Minnesota a state that he could win, everyone got out to vote, which was really exciting,” Brunell said.

Largely known as a new battleground state after an extremely tight race between Trump and Biden, Georgia also had two Senate seats up for re-election. A special general election featured Republican Senator Kelly Loeffler, appointed to her seat in 2019, Democratic candidate Raphael Warnock and Congressman Doug Collins. Warnock won the plurality of votes with 32.9%, and Loeffler attained 25.9% in second place. In the other Senate race between Republican incumbent David Perdue and Democratic candidate Jon Ossoff, Perdue missed the majority of votes, winning 49.8%. Georgia state law requires that if no candidate receives a simple majority in the election, the top two finishers advance to a run-off election in January.

White, whose home state is Georgia, hopes that both Warnock and Ossoff will win the Senate races for the Democratic Party to secure a majority in the Senate.

“I think if the Democratic Party is able to secure their position and power in Georgia for these Senate races, a decent amount of changes could happen. Particularly looking at health care and housing organization, and how that could [positively] affect the lives of Georgians with the overall health of Georgia and its cities,” White said.

Senior Wheeler Young emphasized that Collins attracted Republican voters who would’ve voted for Loeffler if he was not on the ballot in the special general Senate election.

“If you took Doug Collins out of the race, that would’ve helped Loeffler. And Perdue won the [plurality] vote in his initial race. So, I think Republicans will win both of those run-offs. But, I think these run-off elections will be the highest-grossing, in terms of [monetary] contributions, on both sides of the aisle in American history,” Young said.

White noted the significance of the work of politician, lawyer and voting rights activist Stacey Abrams in Georgia leading up to the election.

“Stacey Abrams was able to get around 800,000 new voter registrations in because of all her work in a network of organizations and highlighting voter suppression. I feel like, with that effect, the Democratic Party will be able to acquire those seats in January,” White said.

“If you look at Georgia and see Stacey Abrams’ work in what she’s done to combat voter suppression, it’s important that we keep that up in future elections. Maybe Georgia would’ve voted blue in 2016 if voter suppression wouldn’t have been so prominent within the state. We need a person like Stacey Abrams throughout every state and district,” Kaur said.

A subject of considerable controversy surrounding the election is the political polarization between Democrats and Republicans.

Senior KP Porter, who identifies as a centrist, said that people with different opinions not trying to understand one another has contributed to America’s divided politics.

“We don’t know ourselves well enough, I think. We’re not taking the time to talk or understand each other anymore. I looked back at Barack Obama and Mitt Romney’s presidential debate [from 2012] and in that, I really felt that there were policies talked about. You don’t hear enough of what people are standing for,” Porter said.

Cleland explained a phenomenon called “voter-shaming,” and asserted that Democrats need to resist criticizing people who disagree with them.

“As a progressive, I want to see progressive goals implemented. By voter shaming and driving people away from us, that is the exact opposite of what we want to be doing. If I wanted to get you to vote for Biden, I wouldn’t do it by shaming you. I’m going to do that through persuasion as to why Biden is the better candidate. We need to focus on how we need to win these voters rather than driving them away,” Cleland said.

Darcy expressed the sentiment that to ameliorate the fractions in America, politicians should work across the aisle to achieve bipartisanship.

“Right now, the country is so divided and polarized that some people on the Left are saying you should not speak to people who supported Trump and that you should have no association with them. I think that hurts people more than it helps. Everyone should come to a place where they are able to work together and pass bipartisan decisions and work across the aisle,” Darcy said.

Reflecting on the historic election, Democracy Matters President sophomore Bryn Luedde explained that Democracy Matters is dedicated to fostering a stronger culture of civic debate and participation amongst college students.

“Political participation should not be a once-every-four-years type of action, but a continuous commitment. I hope that Democracy Matters can continue to help facilitate discussions on big issues like campaign finance reform, gerrymandering, racial justice and climate change. Our biggest strengths looking forward are our partnerships with other student organizations,” Luedde said.

Senior Ben Becker, who was not a Biden supporter in the Democratic primaries, is hopeful that Biden will unite the country.

“I do think that Biden is able to listen to reason, and to listen to the reason of the Left more than Trump would ever be capable of. As far as Trump is concerned, anyone who opposes him is a socialist or Antifa supporter. I think Biden is going to be a lot better in terms of taking back the polarization of our country and uniting us, compared to the last four years,” Becker said.