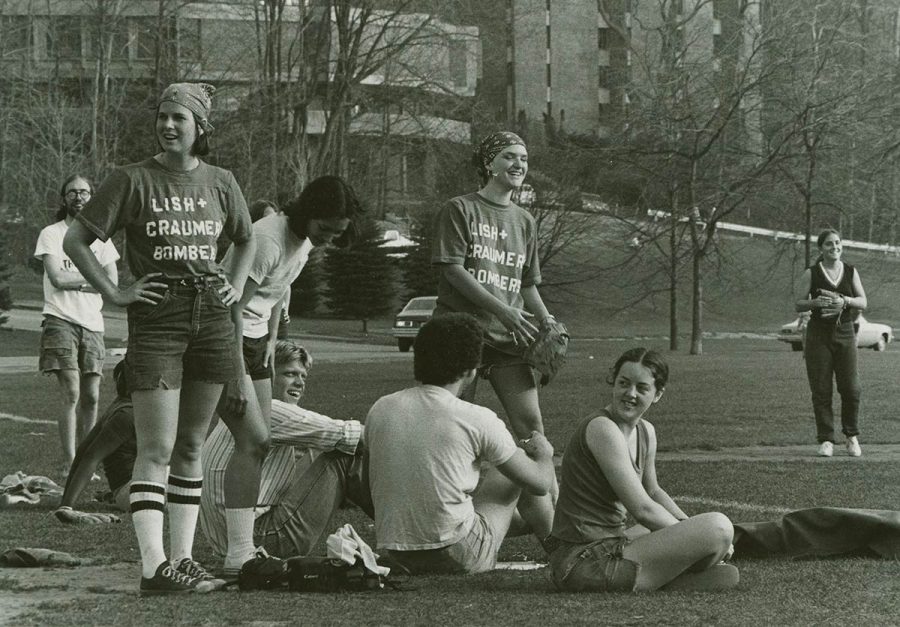 It may be difficult to believe, but Colgate has only been admitting female students since 1970 — just 50 years now. It would be hard to overstate how integral women have been to constructing Colgate as an institution. This year, Colgate celebrates Colgate Day with “50 Years of Women” Zoom events, focusing on enriching conversations with alumni, current students and faculty that reflect on Colgate’s progress and celebrate community members who have immensely influenced Colgate today.

While it’s important to acknowledge the people who have paved groundbreaking paths for the community so far, students and faculty alike believe that it’s just as important to look ahead and consider what the future of Colgate should entail.

In a “Co-education Celebration Webinar” on Sept. 13, Lee Woodruff ’82 moderated a Zoom event with three speakers who have been influential in women’s progress at Colgate.

In the talk, 11th University President Thomas Alva Bartlett, who served from 1969-1977, reflected that he knew the co-educational model must happen and that the issue was practical, not theoretical. He carefully laid out a set of steps to the plan, communication with alumni being vital.

Jane Pinchin, Thomas A. Bartlett Chair and Professor of English Emerita, remarked that she saw one of the first steps in the task as changing the pedagogy, allowing women faculty to come and make their marks on students’ academic paths.

Jill Harsin, Thomas A. Bartlett Chair and Professor of History and Director of the Division of Social Sciences, reflected on when she felt like it was “normal” for her to be at Colgate.

“In 1990, I had already been [at Colgate] for 8 years. We had a celebration for ‘20 years of women’ and I remember thinking, ‘Only 20 years?!’” Harsin said. “That seems impossible! I really can’t imagine Colgate without women. It wouldn’t be the same place.”

Harsin and Pinchin both acknowledged that there’s still a long way to go in terms of progress on campus. Harsin worries that, although the University has made some strides to help remedy the issue, a brutally exclusive system still lies at the root of social life.

Current students and faculty feel the need for more progress as well. Junior Valerie DeLeon, a women’s studies minor, shared her thoughts on the celebrations.

“I think that it’s great that we’re celebrating the 50 year anniversary of the first co-educational class. However, it’s important to also recognize how many women on this campus are negatively impacted by the cultures that Colgate perpetuates. There are many pressures for women to look and behave in certain ways and if we as women fail to uphold these expectations, then we tend to feel rejected by men and even other Colgate women,” DeLeon said.

Danny Barreto, Associate Professor of LGBTQ Studies, picked a specific point of focus, pointing to the need for more advocacy for those who feel unsafe on campus due to sexual violence.

“As Colgate faculty, we will be continually coming up short in our educational mission if we cannot ensure a safe learning environment free of sexual and intimate partner violence. Although this touches everyone on campus in different ways, it disproportionately affects women, people of color, LGBTQ+ folk and gender non-binary students and keeps them from having the fullest experience possible during their four years on campus. Student activists are doing so much, but we need those who most benefit from patriarchal power structures demanding change,” Barreto said.

“I think it’s a good thing that we’re trying to liberate and pay attention to this progress and look at how our school has gotten more diverse, but it’s easy to ignore conversations considering who still hasn’t won on campus,” Perez-Dietz said. “I think sometimes guising things as a celebration is like that metaphor of giving one person a huge gift, like how I could buy you a designer bag and you’d love it, but I could also bring you a cup of tea every single day instead. Those are two different acts of giving but, by giving every single day, there’s more consistency. Again, this celebration is great because it’s so great to be able to celebrate people, but what happens next? Do we just wait for next year?”

Perez-Dietz is a leader of the Medusa Movement. The Medusa Movement, formed this past summer, works to make Colgate a more survivor-centric community with an intersectional and LGBTQ+ approach. The movement is leading a protest on Colgate Day, Nov. 13. Hundreds of students have purchased teal t-shirts to wear to stand in solidarity with all survivors, BIPOC and LGBTQ people who don’t feel safe on Colgate’s campus.

“We’re trying to make [the protest] into something that’s productive beyond just a visual statement,” senior Helen Ferguson, co-founder and leader of the movement, said.

Ferguson also commented on how the motivations and ideas behind the Medusa Movement protest may tie into Colgate celebrating “50 Years of Women.” Although the protest and another Colgate celebration Zoom are both happening on Nov. 13, they aren’t meant to be linked together.

“We’re fighting a fight that many before us have. The women of color who made HAVEN happen are obviously a huge inspiration to us and we’re trying to continue that fight for them. The culture hasn’t entirely changed in the way that they would hope, from what I can gather from their protest,” Ferguson said. “Obviously sexual assault and sexual violence is not just a women’s issue, but I think that in terms of feminism, it goes beyond just female-identifying people and I think that this is a fight [where] we want to include everyone. It’s connected to the people before us who have fought for similar things.”

“Pushing our university to be more survivor-centric means pushing them more to consider all kinds of people — it isn’t necessarily just pushing for safety for sexual assault survivors, but pushing for safety for all students. Kind of back to that cup of tea thing, looking at how we can make consistent intersectional progress and looking at who should be centered in conversations.”

They note that their tea metaphor, symbolizing choosing to make this consistent effort for continued progress, fits in perfectly with the Medusa Movement’s goals.

“Something we’re all trying to do as a movement is create this kind of consistency in conversation, which is hard,” Perez-Dietz said. “But silence is something that functions to stop progress and to stop growth. So we’re trying to figure out how to have this sexual prevention and awareness and advocacy side, but in an ideal world we can also uplift everyone’s voices and want to incorporate more people.”

While there’s much to celebrate in 2020 marking “50 Years of Women,” there’s even more to focus on and to strive for. It’s important to hear from the people who greatly helped in making the history themselves — they’ve accomplished incredible things for the community today and set the groundwork for countless Colgate experiences that wouldn’t be possible without them. But, looking at perspectives from those who experience campus life today is essential as well, and the most relevant to an ongoing conversation.