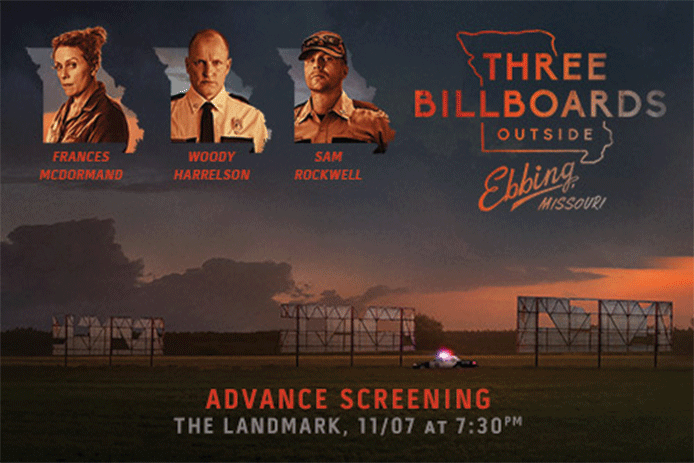 The Oscar-nominated movie shows a lot of promise for winning in many categories at the Academy Awards.

If you appreciate heavy drama, enjoy quips about mama’s boys or don’t mind cinema violence – or a combination of all three – then Three Billboards Outside Ebbing, Missouri certainly won’t leave you in mis-ery (get it?). Based on the outcomes of the 2018 Golden Globes, the film has a good shot at taking home a couple of Oscars this year, particularly in the categories of Best Picture, Best Screenplay, Best Actress and Best Supporting Actor. Its story is powerfully relevant to today’s society as well, in keeping with the TIME’S UP movement which has also focused on sexual assault and inequality and has permeated throughout Hollywood. Honestly, I wondered if the winners of this award season were more of a political statement than anything else, but that notion was proven very wrong; as this film is simply a well-made, satisfying movie.

Three Billboards begins with several different shots of the billboards that become central to the film. These billboards are dilapidated and faded, featuring old vintage advertisements, one of which includes a baby. Angered at the police’s lack of progress in the seven months following her daughter’s murder, protagonist Mildred Hayes, played by Frances McDormand, takes matters into her own hands. To the horror of the town, she pays an ad agency to fix up the billboards to her liking. In the end they read: “RAPED WHILE DYING,” “AND STILL NO ARRESTS?” and “HOW COME, CHIEF WILLOUGHBY?” Unfortunately, very few people are on Mildred’s side – not even her ex-husband or her son; and it definitely doesn’t help that Chief Willoughby (Woody Harrelson) is well-liked by the townspeople and is dying of pancreatic cancer.

Given that the subject matter is so dark and serious, I was surprised at the how often I laughed. The number of times I felt close to both crying and giggling felt strangely contradictory. Martin McDonagh deserves credit for his impeccable direction and script; his dialogue suggests a familiarity with southern slang and dialect that is all the more impressive when considering his British background. He manages to create a setting, culture and characters that indicate a custom-made uniqueness but are also representative of a greater epidemic in the nation. For instance, the townspeople are quick to dismiss Mildred’s pain (and essentially her daughter’s rape/murder) when she places culpability on their beloved police chief.

All the characters are so satisfyingly complex and are molded into life with a fantastic cast. Frances McDormand is phenomenal; she shines as a powerful mother who exercises her agency to its full extent, while at the same time struggling with guilt and hurting those around her through neglect. Her actions are often questionable, but she embodies the frustration that women deal with and how far they must go just to be heard. Another performance to note is Sam Rockwell as Officer Dixon. Rockwell has been underrated for so long; it’s nice to see him finally receiving some acclaim. His portrayal of a foolish, brutal and troubled police officer provides viewers with an array of emotions, including disgust, shock and confusion, especially because he seems somewhat redeemable. He ironically provided much of the laughter in the movie, from his relationship with his mother to his characteristic dimwittedness. McDormand and Rockwell’s characters were written specifically for them, and it shows.

Needless to say, the film isn’t perfect. The closing scene leaves you wanting more than its inconclusive conclusion, although I suspect this was an artistic choice. It also shrugs off an important conversation about race in the way that it sketches racism as an unchanging detail of its setting rather than really grappling with it. In other words, the movie presumes that it is enough to acknowledge it exists. Nonetheless,Three Billboards is undeniably timely, rich and distinctive. If you’re just looking for pure entertainment then this probably isn’t the movie for you, but if you can find room for reflection, then you’re in good hands. Hopefully, the reflection that Three Billboards encourages is, as Mildred says, “just the f*****g start” and not the end.