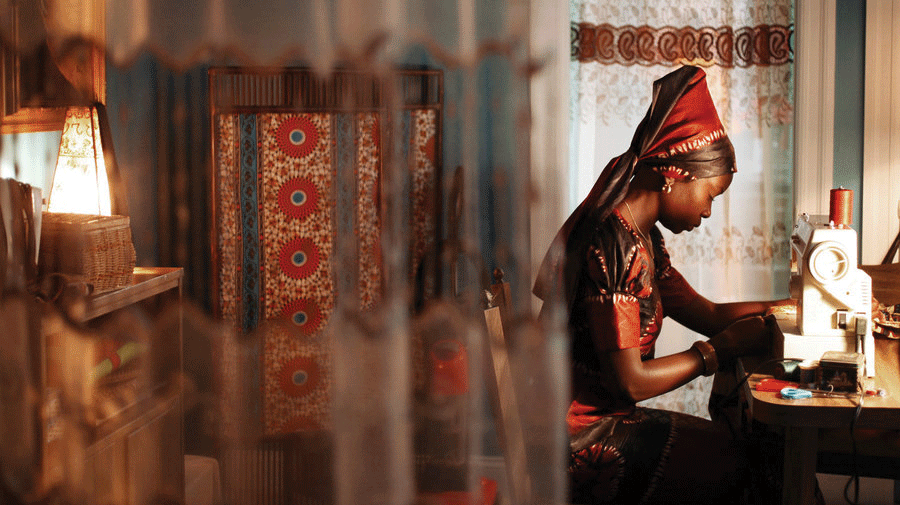 On the evening of February 3, frozen Colgate students made the trek down the snow-covered hill into the warmth of Golden Auditorium to view Mother of George, a film about a Nigerian couple struggling to conceive a child. The film was co-sponsored by the Theater Department and was presented by Visiting Professor of Theater Ntokozo Kunene. Kunene designs costumes for school productions and teaches Scenic Design and Costume Design. Her motivation for showing the film originated from her passion for costume design, specifically wanting to highlight traditional Nigerian dress.

Costume and accompanying traditions played an integral role in understanding the movie, most prominently in the opening scene. The film opens with the marriage of the two protagonists, Ayodele and Adenike. Adenike wears white fabric, representative of her purity and innocence prior to marriage. The elders of the family give Adenike a beaded belt to put upon her waist to ensure fertility in marriage, foreshadowing issues that arise throughout the movie.

One of the most striking scenes deals with the couple’s inability to bear a child. Adenike wakes up next to her husband and walks gingerly to the bathroom. She leaves the door slightly ajar – enough to allow the audience to see into the room – and opens up a package of pregnancy tests. As she is sitting on the toilet, she looks at the test and stares blankly into the room, clearly disappointed. Although it is never directly mentioned, it is evident that the test results were negative. Adenike’s disappointment and sadness evolve into hopelessness and desperation. After more than a year of trying to conceive, she speaks to her mother-in-law, who is desperate for Adenike to have children. Her mother-in-law insinuates that Adenike should sleep with her brother-in-law, Biyi, to become pregnant, justifying this decision by claiming that only the mother of a baby knows the real father. Adenike, feeling as though there is no other option, follows through with her mother-in-law’s advice, which ultimately severely damages her relationship with Ayodele.

The students who attended were particularly struck by the pressures Nigerian women face to have children.

“Overall I thought it was a really good movie. The gender-power dynamic between the two main characters was really interesting … It was really sad how they placed so much emphasis on childbearing,” first-year Jinui Thomas said.

Adenike tries to fight against the pressures, but they ultimately overtake her. She gets a job because she wants to earn her own money to afford a fertility specialist to help her and her husband. Her husband refuses to accept the money or to visit the doctor with her. Despite her efforts to break the status quo, Adenike faces vehement opposition.

The film also reflects society’s perspective of women with the framing of shots. There are several shots of Adenike cooking and cleaning, but her face is not included in the frame. Other shots are solely of Adenike’s waist. Without including her face, the film suggests that she is solely a means of taking care of the home and having children and she is not valued for anything more.

“I had never seen a film like this before … It definitely just makes you think. It’s a very interesting take on Nigerian customs and the misogyny that lives within customs that we don’t consider within the demographic of the United States. It really opened my eyes to the traditions and culture of Nigeria,” first-year Summer Cardarelli said.

As the movie progresses, it is evident to the viewers that the pressure to have a child continues to weigh heavily upon Adenike. Mother of George critiqued and exposed the pressures Nigerian women face to have children. It is a film that can be watched once and never forgotten, shedding light upon serious issues and pressures that are often not discussed.