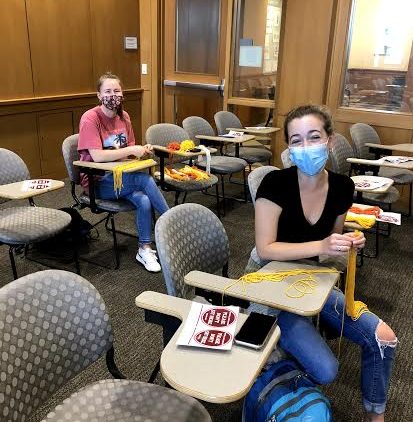 EngAGE is a  Max A. Shacknai Center for Outreach, Volunteerism and Education (COVE) organization that plans activities for the elderly residents of Madison Lane Apartments (located behind the Colgate Inn). In a typical semester, the club holds weekly bingo games on Friday afternoons, as well as movie nights, fall crafts and other fun events scattered throughout the year.

Junior Alexandra Curtin, a leader of the club, recalls that this past spring the club even started a “program where a cruiser took residents from Madison Lane to the Price Chopper Plaza and student volunteers helped the residents with their grocery shopping.”

Activities like this, however, as well as many others, have halted this semester because of the pandemic.

“This semester we’ve had to change practically everything we’ve been doing in the past, which has been stressful, but we’re making progress!” junior Claire Bonzani said, another leader of the club.

Bonzani mentions that Colgate’s current restrictions prevent the group from visiting Madison Lane in–person, and it is unlikely that they will return to in-person activities anytime soon due to the fact that the population at the apartments is in the high-risk group. Despite the distance, however, the group has not lost its relationship with the elderly residents.

“We still want to connect with the residents in any way we can, so we are currently partnering club members with residents to be pen pals,” Bonzani explained.

“It’s great to be able to brighten someone’s day, especially during a pandemic when everyone’s feeling a little isolated and disappointed that they can’t do the things they normally do,” O’Keefe remarked.

Those without pen pals stay involved by making presents for the residents, such as the ghost garlands the club made during their day of service. It is clear that club members are passionate about both their participation in the club and the residents of Madison Lane.

“I joined engAGE because I worked with the elderly throughout high school and enjoyed it a lot. I completed my Girl Scout Gold Award in an assisted living facility in NYC and loved meeting residents and connecting with them. I still visit that assisted living facility when I’m home and I knew that I wanted to have a similar experience at Colgate,” Bonzani said.

Bonzani’s interest in working with the elderly in high school has motivated her efforts with engAGE.

“I’ve enjoyed being able to take my past experiences working with the elderly and improve on them to make for a more meaningful experience for both residents and members. Last semester [Curtin] and I worked on creating a monthly cruiser route for residents to go grocery shopping, which was much needed during the winter months when residents don’t drive as much. Any opportunity we have to address the needs of the residents we work with excites us — we’re always glad when our club can do something to help Madison Lane!” she explained.

Curtin cited Bonzani as well when talking about why she initially joined the club.

“[Bonzani] was in my FSEM and told me about a club where you get to hang out with the elderly and I was really excited because in high school I volunteered at a home for elderly patients with Alzheimer’s and Dementia,” Curtin said.

Curtin’s passion for the club derives, also, from a more personal place and her relationship with her grandma.

“Growing up I would visit my grandma in an assisted living home every day after school and would call her every night after dinner,” Curtain said. “I’ve always loved hanging out with older people and hearing their stories. I know that a lot of people in Madison Lane live alone and might not have visitors very often so I am proud to be a part of a club that helps to provide meaningful human interaction.”