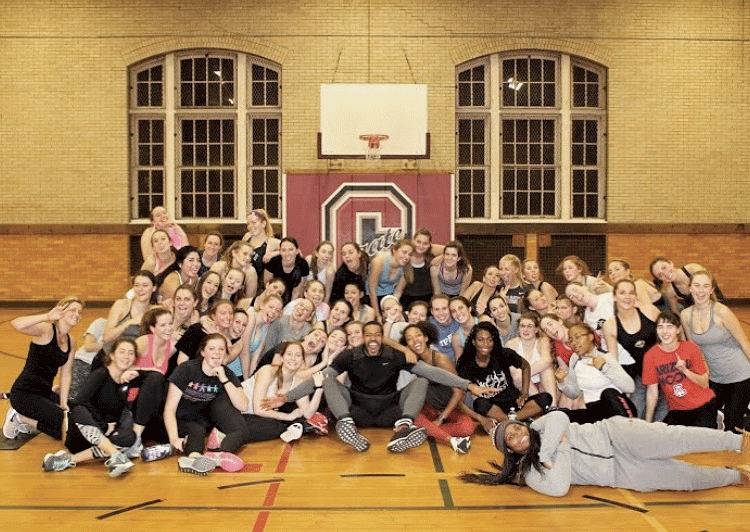 Bigger, a personal trainer,  led a workout class with Colgate students (as pictured above), during which he emphasized using motivational phrases.

The African, Latin American, Asian American and Native American (ALANA) Cultural Center welcomed Eric Bigger, a TV personality and contestant from ABC’s “The Bachelorette”, to Colgate’s campus last week. Known for his slogan “It’s Miracle Season” from Rachel Lindsay’s season, Bigger was eliminated from the final three during his hometown date. Over the course of three days at Colgate, Bigger led a fitness class in the Huntington Gymnasium, watched an episode of the current season of “The Bachelor” with students in ALANA and spoke about his professional and personal experiences in Love Auditorium.

“Bachelor” and “Bachelorette” fans arrived in Huntington Gymnasium ready to work during Bigger’s hour and a half group workout on Monday, February 5. As Bigger led the students through burpees, push ups and planks, he asked that they also repeat motivational phrases such as, “I am phenomenal,” and, “I will win.”

“[I loved how] he extended this positivity to apply to our entire lives and it was refreshing to see how his confidence impacted his life in such a favorable way,” Rathman said.

Bigger’s upbeat demeanor was also clear in his talk on Tuesday night, when he presented a speech that was centered around helping the audience understand how to reach their goals and become better versions of themselves. He began by thanking everyone for attending, and then requested that everyone take off their shoes. Bigger had the crowd hold hands and once again repeat his motivational phrases. He feels the most important aspect of self-growth is embracing uncomfortable situations, such as taking off your shoes and holding hands with people you haven’t met.

Bigger projected a video of an interview of Oprah Winfrey before the launch of her TV series. He asked the crowd, “What’s her attitude?” as Oprah explained that even if her show did not succeed, she would be okay and she was not defined by a show. Bigger expressed that this attitude is key to self-growth as well.

“Using Oprah as an introduction really caught my attention and her outlook was admirable,” she said. “I think his thoughts on putting yourself in uncomfortable situations were so important.”

Bigger grew up in inner city Baltimore with two choices: drugs or basketball. Bigger had to act as the “man of the house” starting from a young age. He expressed that he was not allowed to be emotional or vulnerable. With three sisters and a hard-working mother, his first and only job was to care for them. Because of his upbringing, Bigger explained that he had to teach himself how to express his feelings and motivate himself.

After he graduated from college, Bigger moved to Hollywood with little money and no place to live. Working small jobs through central casting and retail, Bigger was thrown into a situation in which he had to take risks. He eventually started his own personal training group. Now, after his season on “The Bachelorette,” business is flourishing. He credited his success to his ability to embrace those uncomfortable situations, because this allowed him to learn about himself in ways he had been unable to in his childhood. One of the themes of his talk was that we all must take risks and embrace the unknown to meet our goals.

Bigger was asked about being one of the only African American males to reach home-town visits on “The Bachelorette.” Bigger responded by stating that he did not feel any pressure. He explained that he was there to find love; he made personal goals and focused on those to keep him away from outside tension.

Bigger explained his slogan, #miracleszn, which he uses to market his personal training. When he arrived on “The Bachelorette,” Bigger was unsure as to whether he would find genuine love. From arguing with other men to being injured on one of his dates, Bigger was thrown into many situations that were extremely uncomfortable. However, he did find true love and overcoming those situations allowed for his success.

Bigger’s general message was that we must not define each other by skin color, money, material things or status.

“It’s not what you get out of life, it’s what you become,” Bigger said.