Black Panther Makes a Statement on Screens and the Red Carpet 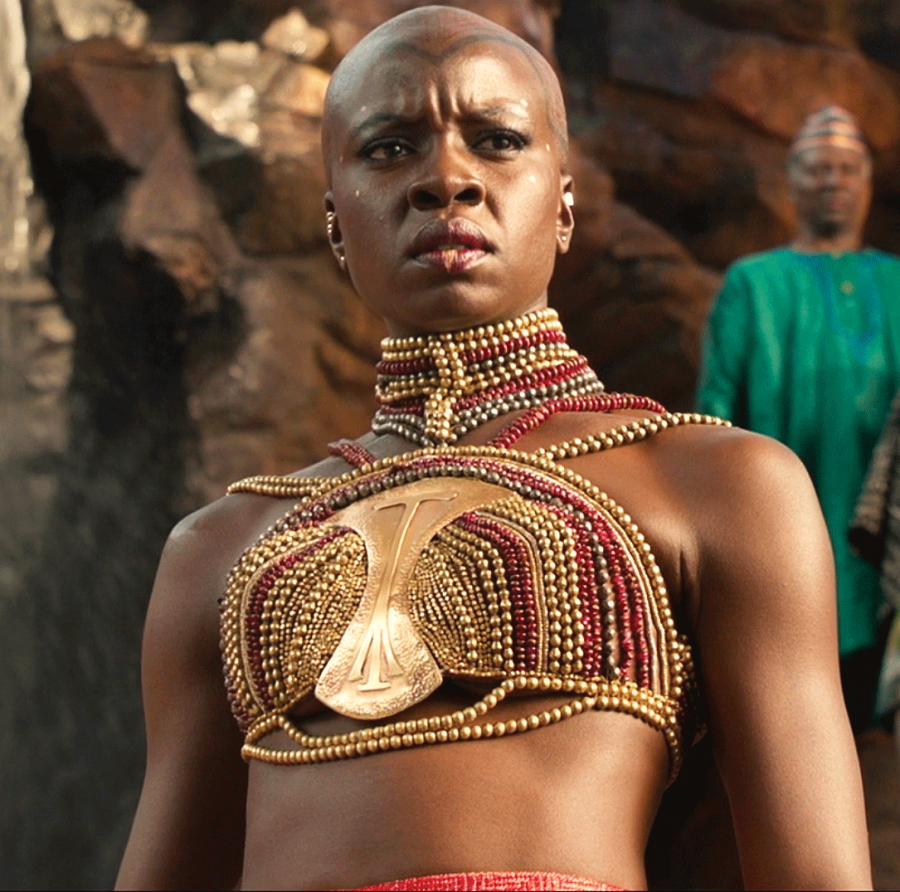 The Maasai tribe was used as inspiration for the beadwork seen throughout the movie.

The Black Panther movie made its debut last weekend with both fans of the comics and those new to the fandom alike waiting in line to see the groundbreaking film. Black Panther proves groundbreaking in the sense that it is a superhero movie that features Marvel’s first black superhero, it was the first Marvel film to be produced by an African-American director and it has a predominantly black cast full of top-tier actors and actresses such as Lupita Nyong’o and Chadwick Boseman. Black Panther not only exceeded expectations, but the movie itself made a political statement.

One of the things that caught my attention about the film was the exceptional fashion-forward costume designs. This led me to stumble upon Racked’s video titled “Black Panther’s Symbolic African Costumes.” The video provided an explanation of the history behind the costumes in the movie and decisions made by the  costume designers. The costumes in Black Panther adhere to the style of Afrofuturism. According to Ruth Carter, one of the costume designers of the movie “took culture and mixed it with modern shapes and also infused some futuristic elements to make it a fantasy.”

Afrofuturism is the embodiment of black African culture in science fiction with an Afrocentric focus. The term was devised by cultural critic Mark Dery in the essay “Black to the Future.” Afrofuturism demonstrates the power and strength of black culture while bringing awareness to the huge diversity within it. In the Racked video, Ruth Carter explained that her team of 100+ people worked hard to make sure the costumes of Wakanda were “an accurate homage to Africa” and that they got inspiration from a variety of tribes all over Africa. For example, she mentions that since the Dora Milaje wore red in the Black Panther comics, her team looked at the Turkana tribe that utilizes beautiful reds for its clothing and beads. Designs by the Maasai tribe from the areas of Kenya and Tanzania was used as inspiration for the beadwork in the movie. The neck rings used by characters like Okoye were based on the South African Ndebele tribe. Lupita Nyong’o’s character Nakia’s look mainly consisted of a vibrant jewel-tone green palette that was inspired by the Ethiopian Suri tribe. Ruth Carter’s design team also 3D printed the South African Zulu married women’s hat and used it as one of the main pieces in Queen Ramonda’s royal attire. The fashion in Black Panther was able to successfully encompass a diversity of looks from African culture and highlight their beauty.

The Black Panther red carpet premiere is another example of bringing African fashion, hairstyles, jewelry and patterns into the mainstream. The actors and actresses of the movie and the other celebrities who attended did not abide by the usual Hollywood standards of dress upheld at typical premiere carpets. The theme of the night was “royal attire.” Looks and hairstyles worn by stars like Angela Bassett (Queen Ramonda), Chadwick Boseman (T’Challa / Black Panther), Danai Gurira (Okoye), Issa Rae and Donald Glover showcased Black African style in a regal fashion. They all went beyond the standard and used the carpet as an opportunity to celebrate Black African culture, which is terribly underrepresented in Hollywood.

The impact a movie like Black Panther has on our society is greatly significant. The recognition of Black beauty and how immense and diverse African culture and fashion is often overlooked. Black Panther breaks away from the discourse of poverty typically associated with Africa and brings to light a positive and empowering narrative. If you are a person who is not black watching this movie, do not let it become just another “fad.” Black Panther represents more than just that; it opens up discussion and portrays the immense diversity and power of African and African-American culture. Africa is not a monolith. Black Panther contributes to the effort of shattering this stereotypical perception and raises awareness.