Surveillance Testing Will Continue As Campus Closes Without Universal Testing 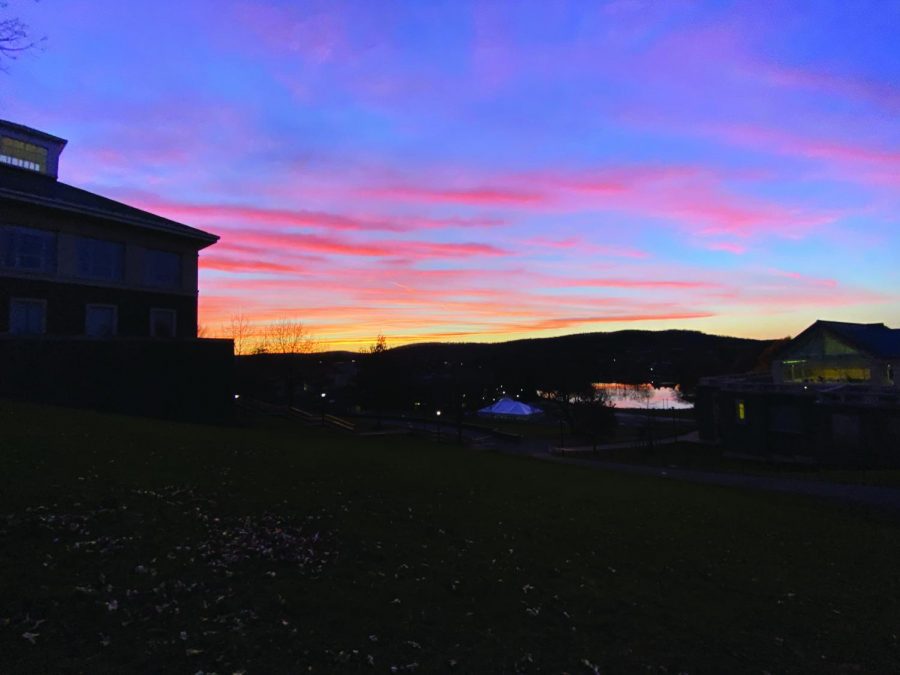 No campus-wide individual testing will be conducted for the remainder of the Fall 2020 semester, as stated on the University’s web page. Instead, the University will continue surveillance testing over six percent, close to 10 percent, of the on-campus community prior to student departure. The University offers voluntary antigen testing with test kits provided by New York State for all interested students in the meantime, as stated in a campus-wide email on Nov. 13.

With the end of in-person instruction during the Fall 2020 semester scheduled for Friday, Nov. 20, all students unapproved for staying on campus throughout the semester or over the winter recess are required to depart by Sunday, Nov. 22. Students planning to return to campus for the Spring 2021 semester have already received or will receive a testing kit from Let’s Get Checked. However, this kit is not for pre-departure use; it is to be used at home between Jan. 11 and Jan. 13 prior to arrival on campus.

“Because of the excellent adherence by the Colgate community to the Commitment to Community Health, continued random testing, and wastewater monitoring, the COVID-19 test positivity rate in this area is very low and indicates no need for testing all students prior to departure,” the web page states.

As part of the Task Force on the Reopening of the Colgate Campus, Associate Vice President for Campus Safety, Emergency Management and Environmental Health and Safety Dan Gough said the decision to not conduct student exit testing was made after comparing Colgate’s “robust” testing program against “hundreds” of other colleges’ and universities’. The University has no active current COVID-19 cases.

“The current campus community, combined student and employee, infection rate based on a seven day rolling average is currently 0.003 percent. We have empirical data that shows our infection rate is so low that it would not be necessary,” Gough said. “Colgate has only had two positive student COVID-19 cases since Sep. 22 and no positive cases since Oct. 12. That’s incredible! We really are a national success story with what we’ve done.”

Most processed results from the weekly surveillance testing conducted on Monday, Nov. 9, Tuesday, Nov. 10 and Wednesday, Nov. 11 came back negative.

“228 out of 231 all negative–we’re still getting all negatives. We have 61 more tests pending from the surveillance testing we did on Wednesday, but if those come back negative, we’ve pretty much made it,” Gough said.

For surveillance testing, a portion of students, staff and faculty were randomly selected, and a portion were chosen because of health concerns surrounding wastewater testing or reports of Commitment to Community Health violations. The Task Force has also been trying to conduct testing for all  students who had not yet been tested over the course of the semester following the initial Gate 0 quarantine, Professor of Sociology Carolyn Hsu explained.

“I don’t know that every single student was tested over the course of the semester, although that’s what the Task Force and Health Advisory Team wanted to do. In the last couple of weeks, we have been trying to test every student who had not yet been tested yet,” Hsu said. “However, I cannot promise that we were actually successful at it. Some students simply did not show up for their tests, despite multiple emails and calls. Some students have returned home early for Thanksgiving Break, so they are no longer on campus.”

“We would deplete our entire supplies, leaving the community without anything for the winter break… That would be imprudent,” Gough said.

“For antigen test systems, like the ones we’re using, which are the industry highest standard, the false positive rate is about 3%. If we were to test the full student body, that’s 2,650. That would result in 80 false positives, which means we would have to do a PCR test on each of those individuals and if that was positive too, they would go to the Wendt [Inn]. 80 is a lot, that’s a lot of students in isolation,” Gough said.

However, surveillance testing will be continued throughout the winter recess up until students return to campus.

“There will only be one week that we top that for the Christmas holiday week. We felt comfortable doing that and wanted to give our testing team a break too,” Gough said.

For students who choose to leave campus, guidance from American College Health Association (ACHA) specifies that testing should be conducted on an individual basis, and should be elective instead of mandatory.

“If we were to have pre-departure testing, you may not want to risk being a false positive and having to stay here through thanksgiving. I would want you to be able to make that decision yourself, not me to make it for you,” Gough said. “The other thing ACHA says is… that test is a moment in time. If I do a pre-departure test for you on Monday or Tuesday I wouldn’t want people to have a false sense of confidence that they are negative and ok all the way home. You could certainly become infected in the remainder of your time here or your travels home.”

Students who elect for testing before departing from campus can request to do so from local providers as listed by the Madison County Department of Health. The Office of International Student Services (OISS), in partnership with the Emergency Operations Center (EOC) and Student Health Services, sent out an email to all international students on Nov. 11, encouraging students to submit a request to the Office by Nov. 17 in order to secure necessary PCR and antibody testing to meet requirements set by international countries.

“We understand that some countries require very specific types of testing with very narrow, limited testing windows,” the email stated. “We cannot guarantee to meet your needs; you can certainly submit a request here, however, you should seek for other options as well.”

Senior Yejin Cha, from South Korea, plans to travel back home and return to Colgate campus for Spring 2021 semester.

“I personally don’t have concerns because Korea is doing well compared to other countries. The only part that makes me be extra cautious is the fact that I am going to be traveling for almost 24 hours and you never know where and when you can contract the virus,” Cha said.

In an email from Vice President, Dean of the College and Task Force co-Chair Paul McLoughlin sent Nov. 10, ACHA guidance outlines precautionary measures to minimize COVID-related risks, including minimizing of risk of exposure prior to departure, reviewing home travel guidelines, disinfecting and social distancing within vehicles and planning trips to minimize stops.

Students planning on returning to campus for the Spring 2021 semester will take their testing kit with them for use in January, whereas remote learners returning to in-person instruction on campus in the spring will have testing kits mailed to their home address, as stated in McLoughlin’s email. For students remaining on campus during the winter recess, the University is developing plans to accommodate them. Gough explained student-athletes will return home at some point during the winter recess and will return to campus earlier than scheduled dates for arrival in January.

“We have a little over 150 [students staying on campus] last I checked, mostly international students as you can imagine. That’s not including student athletes between mens and womens hockey and mens and womens basketball; that’s another 81. They are all going home for some portion of time and when they return doing a quarantine just like [all students] did for the first semester and will for the second semester,” Gough said. “For the students that are approved to stay over the winter break that are non student athletes, they’re gonna go through the surveillance testing.”

Junior Sowon Kim, from South Korea, will remain on campus during the winter recess through to the Spring 2021 semester.

“It’s just not an ideal time for traveling, and I don’t have any family/relatives I can stay with in [the] USA,” Kim said. “I appreciate that I am allowed to stay on campus because it will be safe, but at the same time I’m definitely worried about how much support there will be after closing for students who remained… I stayed on campus for the previous winter breaks as well, when all the academic/recreational buildings would be locked up and fewer cruisers were running. It can really get isolating and limiting with not much to do, and I’m afraid with COVID it could be worse this time.”

Sophomore Geddy Rerko, who plays for the Colgate women’s basketball team, will return to campus Dec. 4 and quarantine for two weeks in the Wendt Inn. Student athletes will be tested three times a week to meet National Collegiate Athletic Association (NCAA) requirements, as explained by Gough.

“We are able to do workouts in small groups, like we did in the early gates at the beginning of the semester. We are tested upon our arrival I believe. After that, we are able to resume full team practices and return to our normal housing,” Rerko said.

Rerko says she is uncertain on the specifics of facilities made available to students over winter recess. She has been told that access to dining hall hours will be limited, but is awaiting further communication on hours for restaurants, on-campus buildings and services during the two week quarantine period. Rerko expresses concern over the mental health of students being made to remain on campus over the winter recess while feeling isolated.

“I am worried about our team’s mental health during this time because it is going to be very isolating and more limited than in the past. I understand why they want us here, to get ready for the season, but it’s just a very tough idea to think of playing games when the virus is creating devastating effects on the country and world as a whole,” Rerko said. “I think it is smart to close now to eliminate concerns with people traveling home and then returning to campus and bringing back COVID-19, I just wish we were able to start the semester earlier and finish finals before Thanksgiving like some other places have. It would be nice to not worry about finishing online and doing finals online… especially during this unusually tough semester.”