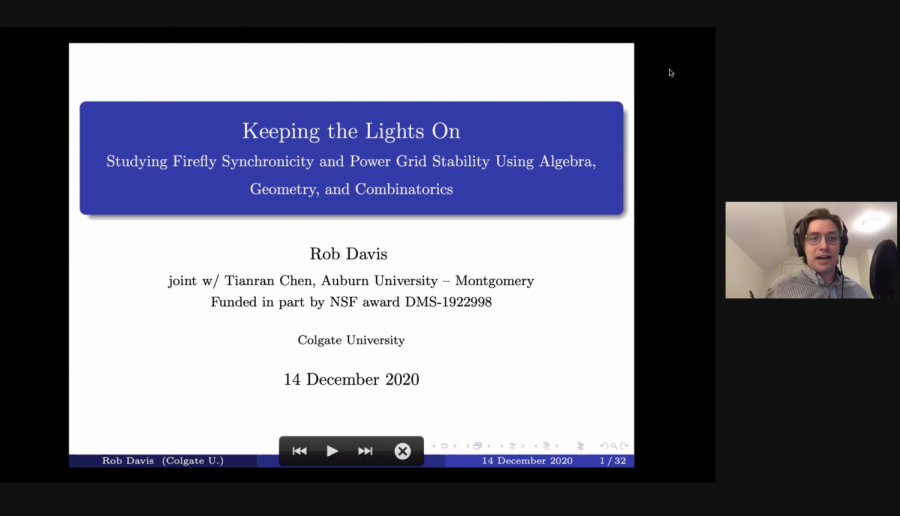 At first glance, the flashing of fireflies and algebra seem unconnected, but in fact, they come together on the common and important subject of power grid stability. On Friday, Dec. 4, Assistant Professor of Mathematics Rob Davis delivered a lecture about the mathematical approaches he is using in his research concerning the stability of power grids, inspired in part by fireflies.

“Under certain conditions, the lighting patterns of some species of fireflies synchronize to create beautiful, massive lighting patterns. The second scenario occurs in the study of electrical grids: if we know how a collection of power stations are interconnected, we need to make sure the voltages at each station are adjusted to ensure that there are no blackouts, brownouts or problems that might damage equipment,” Davis explained.

Power networks are currently undergoing unprecedented transformations amidst population growth, urbanization and green energy developments, creating a need for research like Davis’s. His lecture is part of an ongoing project with Auburn University Professor Tianen Chen that is funded by the National Science Foundation (NSF). Davis lightheartedly prefaced the presentation with a warning that although some of his slides contained complex mathematical concepts, figures and equations, viewers should not be scared, as he would make his work understandable during the lecture. Throughout the talk, he used familiar metaphors and drew simple illustrations to ensure that his audience was not lost amidst such high-level mathematics. For instance, he explained the “Dragon Marriage Problem,” a concept that involves finding compatible conditions among solutions, by comparing it to pairing students with academic advisors. He also drew pared-down illustrations to help explain particularly advanced concepts and clarify the definitions of important terms like polytopes (a geometric object with flat sides). Davis expertly made difficult, advanced research digestible for mainstream audiences. A defining characteristic of this colloquium was Davis’s translation of theories and abstractions to a tangible situation like power grid stability.

“For one, I hope students better understand that the topics we teach in different math classes are a lot more closely tied together than it may appear. When working in research, you’re allowed to use any tools you have at your disposal, which makes for a lot of fascinating connections,” Davis said.

Davis emphasized that research projects owe much of their initiation and progress to the social aspect of the academic community. Davis’s research is a testament to that. He began working with Professor Chen because their skills and interests were complementary, with Davis contributing a purely mathematical perspective and Chen bringing in more of the contextual factors to the project. Davis added that new projects often result from scholars sharing their work at conferences and with colleagues. Davis urged current students in the audience to embrace this networking side of academia. He excitedly explained that his current research is far from his original area of study thanks to the fortuitous nature of academic networking. His lecture therefore not only connected abstract mathematics, fireflies and power grids, but it also showed that regardless of what one studies now, one can never quite predict what we will do in the future.