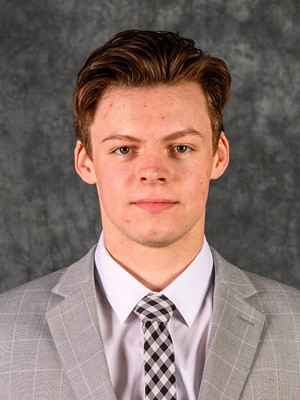 From the moment every young hockey player first steps on the ice, they dream of hearing their name called by the commissioner on draft night and joining one of the National Hockey League’s (NHL) 32 franchises. For Colgate first-year Alex Young, his dream became a reality this past summer when the San Jose Sharks selected the forward out of Calgary in the seventh round of the 2020 NHL draft.

“Watching the draft go on throughout the day and into the later rounds, it definitely made my nerves go up a bit more,” Young said.

With his name yet to be called as the day progressed, Young headed over to a practice with his junior hockey team, the Canmore Eagles, hoping to take his mind off the thoughts swirling in his head. At practice, Young finally received the news he had been waiting for his whole life.

“Once practice started, I stopped thinking about the draft. Then I saw the guys on the bench turn and start cheering when they found out the news, it was a big relief.”

Before Young suits up for the Sharks organization though, he will look to further his hockey development and education with the Raiders Men’s Ice Hockey team. When talking about what led him and his older brother Colton to commit to the Raiders, Young noted the unique dynamic of athletics and academics that a university like Colgate is able to offer.

“The coaches here reached out to me and my older brother Colton when we were back in juniors and offered us to take a trip down to take a look at the campus and the rink and let us know about the program they had. We loved the dynamic of hockey as well as the academics that are provided here; those were the reasons we decided to commit here.” I

n addition to those factors, Young also cited the family aspect of the school and surrounding Hamilton community when deciding where he wanted to play at the next level.

“The people at Colgate are more family oriented and look out for each other; it is a tight-knit community. That was something me and my brother thought was a very important aspect of the school.”

Like most first-year student-athletes around the country, Young’s first experience of college life has been severely impacted by the restrictions in place due to COVID-19. Instead of dwelling on the negatives and what-ifs of his situation, Young has remained positive and tried to make the most of his situation.

“I think it’s been a pretty good experience for what we can do and what the school’s been able to do with the situation. My teammates have been good, they’re all good guys and everybody gets along pretty well.”

When asked to further elaborate on how his relationship with his teammates, Young specifically credited the older members of the team for helping make the transition to Colgate easier.

“The older guys on the team are really driven and really motivated to help the younger guys get integrated with the team and help with whatever they need whether it be hockey or school. They always go to guys and they want to make sure we are on the right path because they were just like us a couple of years ago.”

Despite being one of the youngest players on the team, Young is already having an impact on the ice for the Raiders. He notched his first collegiate goal in the team’s first game of the season against Clarkson and will look to continue to light the lamp as the season progresses. With his combination of skill and maturity, Young will look to lead the Raiders to success during his time in Hamilton.