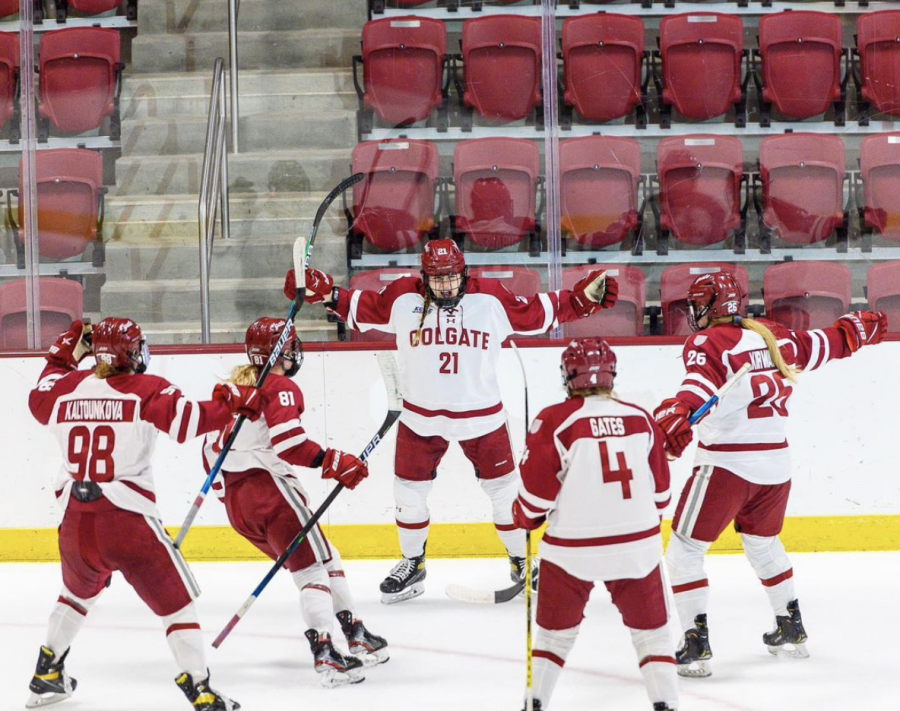 With a record of 4-1-1, the Colgate Women’s Ice Hockey Team is off to a strong start this season, ranking fifth in the nation in the United States College Hockey Online’s (USCHO) latest poll. The team opened the 2020-2021 campaign on Nov. 20 with a home-and-home series against Syracuse, winning the first matchup in overtime by a score of 3-2 and the second 3-1 the next day. The Raiders followed this up with four straight games against No.7 ranked Clarkson, winning two, losing one and tying the final contest. East Coast Athletic Conference (ECAC) play for the team is set to begin Jan. 8 with a game against Quinnipiac.

“Being ranked fifth in the nation is a great feeling, but our team is striving for more than just a ranking,” senior forward and captain Malia Schneider said. “We have the ability to show the importance of the little things in life and despite a global pandemic, we can still do what we love and do it successfully.”

The team was the first at Colgate to resume competition after all athletics were halted last March due to the pandemic. Along with Men’s Ice Hockey, they are one of two teams whose seasons are underway and are making sure they do not take this for granted each time they step out onto the ice.

“Back in March, much like the rest of the world, we had no idea what the future held,” Schneider said. “A lot of the time we struggled to know what was going to happen, but over the summer and at the start of the school year, our team had a clear vision of what we wanted and that was to play hockey again. As we still struggle with uncertainties with COVID-19, we have this same mindset of being safe and smart for not only our team but our community. With this being said, being able to compete again has meant everything to me and our team.”

The team’s opening six games have been against only two opponents and, as it stands, the only other two teams that the Raiders will be competing against during the regular season are St. Lawrence and Quinnipiac due to many schools opting to forego their seasons because of concerns with the virus. Playing against rival Clarkson, who bounced the Raiders in a best of three series in the first round of last season’s ECAC tournament, produced battles that were only heightened by the fact that the teams played each other for four straight times.

“Our team has a long history with Clarkson and it is always a good game when we play them,” junior forward Nemo Neubauerova, who has tallied three goals and three assists in the six games this season, said. “We have never played the same team four times in a row in such a short period of time so it was definitely challenging. There was definitely tension from the beginning that I think continued throughout the games.”

During a time when everything is uncertain, including what the team’s game schedule will look like moving forward, Neubauerova said the team is focused on achieving larger goals through taking each day as it comes and staying in the present moment.

“Our biggest goal is to win the National Championship, but we know that there is a road ahead of us, and we have to take it day by day and game by game,” said Neubauerova. “With the ‘day by day’ mindset, we can take care of our bodies, mental health, school work and be the leaders of our community.”

Schneider echoed the sentiments of her teammate.

“We want to do what we love and that is to play the sport of hockey. Our goal moving forward is to focus on the now and what we can control in this moment.”