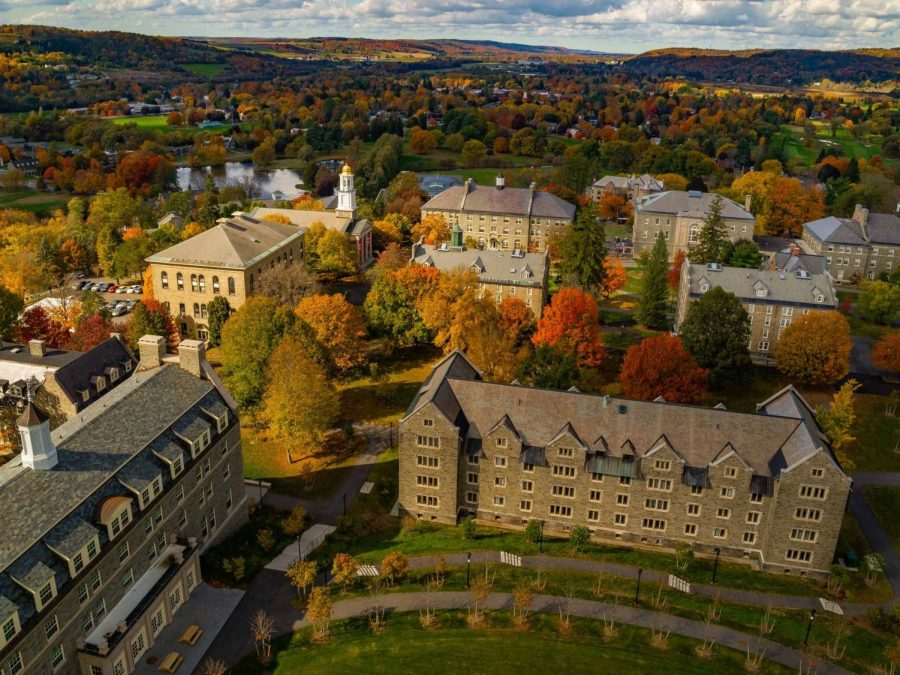 Vice President and Dean of the College Paul McLoughlin announced updates for the spring 2021 semester on Wednesday, reaffirming the University’s plans to bring the student body back to campus after a largely successful containment of the coronavirus on campus in the fall, even as cases rise across the nation and locally, where the Town of Hamilton has 17 of the county’s 407 active cases. Spring plans include changes to universal quarantine procedures upon arrival, an increase in surveillance testing, scheduled break days to replace spring break and insight into plans for vaccine distribution and commencement that have yet to be announced. In the days since the announcement, many students have expressed concerns about several aspects of the plans, most notably the two scheduled off days and the personal car use policy.

“As we have said throughout this academic year, these are our plans as they stand right now; they are subject to change based on public health conditions and guidance from our local, state, and federal public health officials,” McLoughlin wrote in the email to students on Dec. 16.

Students who have elected to study on campus for the semester will return as planned on Jan. 22 and 23 and be tested upon arrival before beginning their universal quarantine in their residences. Per changing CDC guidance on quarantine procedure, the universal quarantine will end in accordance with the timing of the second round of universal testing, which took place 5-7 days after students arrived on campus in the fall.

“The most important change will be a significant increase in testing,” University President Brian Casey told the Maroon-News last week. Casey received the formal spring plans for final review and approval last Friday, prior to the public release of details in Wednesday’s communication. “We really believe that’s the most powerful tool we have… one, because you can identify problems early, and two, it will allow for a potentially swifter lifting of restrictions,” he said.

The spring plans come with other notable changes from the fall semester, including increased surveillance testing in accordance with the Gates of reopening, where the full on-campus population will be tested every two weeks during Gates 1 and 2 and testing will taper as the campus progresses through successive Gates of reopening, as opposed to weekly testing of six percent of the campus population in the fall.

“This increased frequency is planned due to the current widespread nature and prevalence of the virus nationwide and the Task Force’s response to anticipating larger numbers of cases within the campus population as a result,” McLoughlin wrote in his email.

In response to student mental health concerns from the lack of breaks during the fall, the spring plans include scheduled break days on Friday, Feb. 12 and Friday, March 12, with no spring break and on-campus instruction until April 30. Many students have expressed frustration with only having two break days for the entirety of the semester and with both of them falling on Fridays, when many students already have light classloads.

Junior Sarah Millon-Perez promptly started a Change.org petition urging the administration to add additional rest days, saying that the two off days do not account for the substantial mental health and workload concerns expressed by students in the fall.

“Students and staff need and deserve rest during not only a normal semester, but also during a pandemic. We understand that the University has to make changes to the academic calendar to accommodate pandemic restrictions and cannot allow a full length spring break… however, we urge Colgate administration to include mental health in their discussions of students’ health and safety,” the petition reads.

Junior Sarah Contento expressed a similar sentiment and said she promptly emailed McLoughlin after the spring plans were announced on Wednesday with concerns that she and many other students struggled without substantial class breaks during the fall.

“[McLoughlin] replied with a lengthy email explaining the reasons as to why we can’t have any more days off and that he understood and even shared my frustrations. As complicated as all of the planning is, I know Colgate has the time, the money and the people to make a longer break happen. I hope the administration begins to see how crucial having a longer break is for students’ mental and emotional well-being,” Contento said.

According to McLoughlin, who co-chairs the Task Force on the Reopening of the Colgate Campus, the University is required at least 68 teaching days a semester by the Middle States Commission and the NY State Department of Education, and any more than these two days off would push the University under this threshold.

“The two days off that have been added to the spring semester are the maximum number of days we can offer students without needing to extend the semester further into May. The last day of classes is now April 30 and adding additional days off, beyond the two offered now, would require us to extend classes into May and delay graduation. This would have all sorts of implications for internships and jobs,” McLoughlin said, reaffirming the Task Force’s awareness of the difficulties students faced without fall break last semester.

While noting initial concern by the Task Force that giving three-day weekends may incentivize students to leave Hamilton and jeopardize the safety of the community and ability to remain in-person, McLoughlin said they placed the break days on Fridays to make the only allowable days off into more substantial breaks.

“While this may not satisfy all students’ expectations for the spring semester breaks, this is the context that led to these two days off, and importantly, to assure you that the Task Force on Reopening is aware of the challenges of the semester and have provided these two days off in the spring in recognition of these challenges,” McLoughlin said.

Prior to the release of the plans, Casey expressed that the break days would be a validation of the University’s commitment to student mental health.

“[Student mental health] is a huge concern,” Casey said. “Without the rhythm of the fall break, midterms really just kind of expanded… this year you could see the stress rise and stay, and I think the natural rhythms are off. So the Academic affairs Board is looking at prescribed days off – no classes – with parallel communications to the Faculty [saying], ‘these really are days off.’”

Another source of student concern, the policy on personal cars, now allows for students to use and park personal cars on campus weekdays after 4:30 p.m. and all day on weekends, and continue to use cars in town and to retrieve packages from the mail center. When using cars on campus, however, only one student is allowed in a vehicle, citing the risk of spread in cars and enforcement challenges of allowing family units to ride together.

According to junior Senator Kate Connely, the senate passed a resolution in response to a petition asking the university to reconsider the car policy in the fall that didn’t allow students to drive on campus at all, which the administration rejected. Senate members distributed a statement to the student body on Wednesday, Dec. 16 validating the concerns of students on the spring policies and explaining the Student Government Association’s plan to gather student feedback to back resolutions the senate can bring forward when they recommence as a body in the spring.

“Personally, I think the car policies are counterintuitive. So many people feel so unsafe riding a cruiser and considering my own experiences on them, they are in no way following COVID-19 guidelines,” Connely said.

Senate members are asking students to fill out a feedback form about their experiences on the cruisers during the fall, proposing that if students can demonstrate the discomfort and risk cruisers pose, the administration will make the use of personal cars more accessible.

“The rules regarding car policies seem rather elitist since some students cannot afford cars even though the school is pushing their [diversity, equity and inclusion]  agenda. The more support from the student body, the easier it will be to make change,” Connely said. “While senate often has a powerful voice, issues like these need to be addressed by the entire student body, that way the school will be forced to give genuine and logical answers to their ludicrous policies.”

Other changes, including Commitment to Community Health guidelines on travel and guests, have been altered slightly for the spring. The communication prohibits students from traveling outside of the Village and Town of Hamilton and anywhere in surrounding Madison county past Price Chopper and other business on County Road 12B, providing more detailed restrictions than the travel guidance for the fall. The communication also outlines the guest policy for the spring in stricter terms after many students raised concerns of unregistered guest presence on campus and in town during the fall.

“Guests are still not permitted on campus. This includes family members, and the Commitment to Community Health now makes this prohibition more explicit. Students should avoid meeting guests from outside of Hamilton anywhere within the Hamilton community, including downtown restaurants and shops,” McLoughlin’s email said.

“The national news offers both good news about vaccinations later this spring and summer as well as stark reminders that we are not at the end of this public health crisis,” McLoughlin concluded. “Current hospitalizations and fatalities underscore that returning to in-person [instruction] with COVID-19 requires the same diligence and steadfast commitment to one another.”

With the first coronavirus vaccine approved by the FDA last week, how vaccinations may take place on campus are on the minds of many. Casey explained that Colgate’s access to vaccinations will be governed entirely by the state’s vaccine distribution timing, and unlike COVID-19 tests, can’t be purchased by the University.

“We’re waiting for the various higher ed authorities of the state, we’re waiting for them to call us in to tell us,” Casey said. “On the one hand, the instincts are, ‘oh my gosh, let’s get vaccines for our people quickly,’ but I also deeply respect the notion that you have an agency that determines the fair distribution. Because if it became a completely free market, it would move toward the wealthy, and quite frankly, the wealthy institutions. I’m not sure I embrace that either.”

Casey said, however, the University’s aptly timed renovations to Frank Dining Hall make Colgate “one of the few places in the region with sufficient and adequate freezer capacity,” allowing the institution to offer storage space to the state for vaccines that require freezing.

“We are in contact with the county and the states to offer our freezers to help with this effort,” Casey said. “We knew that Frank and other places on campus needed work, but it’s really hard to do work on dining halls when students are here. When students left in March, we took the opportunity to do work on Frank that we’ve been waiting to do, which included increasing our freezer capacity. I had no idea in March and April when we authorized this work, that this incredibly fortuitous byproduct would produce itself. But our posture has been [that] we will do everything we can to help the region by freezer capacity.”

“If you get too much past that, we can’t pull off a graduation because you have to order tents and chairs, so it’s a tricky balance between giving people enough time to get ready but delaying the decision long enough to have it be possible,” Casey said. “Obviously, the primary thing is, we’re guided by the state [gathering limits]… and then it’s just, ‘how safe will it be to gather people, and how safe will it be to have people to come here?’”

Casey said even with gathering limitations, most of the class of 2021 will be on campus for the spring, allowing the University to explore options for multiple small, satellite ceremonies. However, logistics for the spring return remains the current focus for the administration and Emergency Operations Committee.