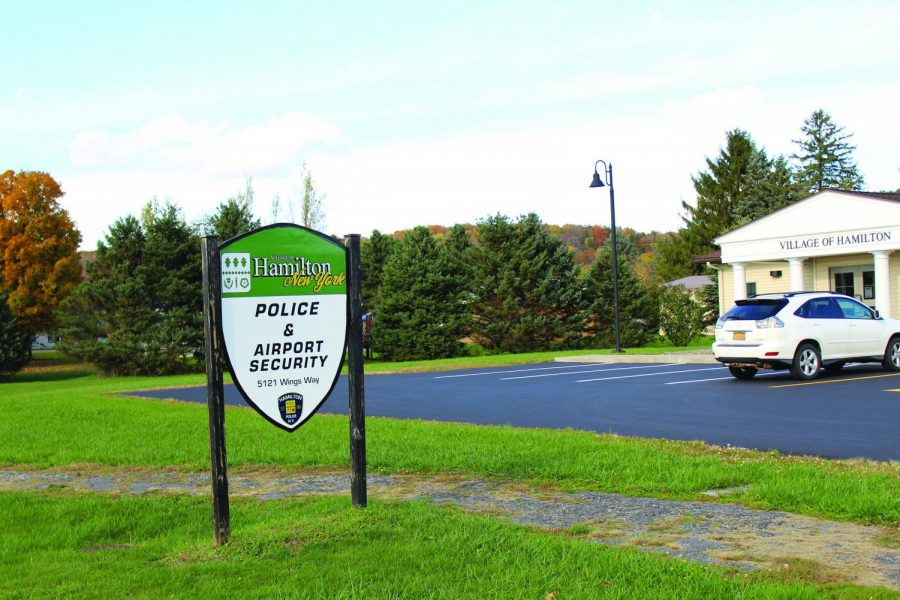 Cuomo’s Executive Order, released on June 12, calls on local government agencies with police entities to review and propose reforms to “deployments, strategies, policies, procedures, and practices” with significant community engagement to address “racial bias and disproportionate policing of communities of color.” The plan is expected to be adopted as a local law or resolution by April 1.

The policing that exists in the Village of Hamilton is primarily controlled by the Hamilton Police Department (HPD), which reports to Mayor RuthAnn Loveless, and Colgate’s Campus Safety, which reports to the University. While the survey is only mandated to go to the Madison County Sheriff’s Office, HAARC will share the results with HPD in order to open a dialogue and hold law enforcement accountable.

The Madison County Sheriff’s Office released a Civic Alert on Sept. 3 calling on community members to submit feedback by Oct. 23. The resulting plan will be made public for comment in January before it is finalized in April. Additionally, the Sheriff’s Office published a Press Release on Sept. 17, again asking for community feedback and affirming its relationship with the community.

Upon seeing the Executive Order, HAARC began pulling previously reviewed resources together to draft a survey for community members.

“We’ve been talking about these issues for a long time before George Floyd’s murder because there were many murders before that and, in general, about reactions to minority populations in Hamilton. Then, when the Governor made this Executive Order, the conversations got more focused and directed,” HAARC member Marian Abowitz said.

Despite Sheriff Todd Hood’s calls for community input, HAARC members John Bailey and Abowitz felt it was imperative for the voice of citizens to be better organized and amplified. Abowitz also explained that messaging from the Sheriff’s Office has been largely congratulatory of law enforcement’s relationship with County residents, which could make it easier to brush off the call for change if unopposed.

“When the Sheriff’s [Office] put out this request for community involvement, we started talking about that and the idea came up [that] we should solicit ideas from the community. I think that sort of happened during one of our weekly rallies… [after] seeing all the community so supportive of Black Lives Matter and part of that is reforming police… We want to help with this, we really think it’s important,” Bailey said. “What we’re trying to do is get a lot of the community interested in doing this, and therefore I think we would have a greater chance of our issues being heard.”

Bailey said that there are four main “areas of concern” addressed in the survey, plus additional topics. These four areas include accountability and oversight, policies and procedures, education and training and community trust and communication. Each of these broader categories addresses more specific issues and demands, Abowitz explained, like an end to chokeholds, thoughtful use of weapons, joint decision-making and more.

Other issues tackled include the militarization of police with resources, like modified tanks and weapons, and the display of controversial symbols on public police property like Blue Lives Matter flags. Bailey said another main area of concern is disproportionate escalation of law enforcement response. Many towns in Central New York, like the Hamilton township which houses the Village of Hamilton, do not have a local police force and thus are controlled primarily by the county’s Sheriff department and state police. Having multiple types of policing with no centralized local leadership can lead to over-policing and rapid escalation of calls, Bailey and Abowitz explained.

As an example of this, Abowitz pointed to the 2017 Glue Gun Incident, in which a tank-like police vehicle arrived on campus within minutes in response to a student holding a glue gun who was falsely identified as an active shooter.

“Things escalate very quickly if there’s no real plan, and at what level of disturbance to the community do things kick in like tanks? It’s not a true tank, it’s got rubber tires, but if you had it coming at you you’d say, ‘there’s a tank coming after me,’” Bailey said.

Events like the Glue Gun Incident have alerted the town and the Colgate community alike to policing issues in the area, and Abowitz, Bailey and Junior Sally McGee believe students play a crucial role in Hamilton police reform. As students are residents of Hamilton for most of the year and the student population is more diverse than the Village, Abowitz and Bailey said student perspectives are essential.

“[Students] are policed along with all of us, and so I think it’s very important to get their input,” Bailey said.

McGee, who worked on the survey to ensure it applied to Campus Safety and Colgate students, said she thinks it can be easy for students to forget the broader community, but that this survey could serve as an important connecting point.

“I think it’s really easy to forget that we do live in the larger Hamilton community with different people and populations that we might not see up the hill and in your classes and there are different perspectives,” McGee said. “This is going to be a big [opportunity] for Colgate students to understand the community that lives off the hill, and I think that the community is going to understand the students on the hill in relation to police interactions and violence.”

Abowitz said she hopes to see the Sheriff’s department and HPD respond with open, public dialogue.

“I would like to see them respond with respectful appreciation for us having done the groundwork and an invitation to a meeting,” Abowitz said. “I envision working through, in a non-hostile dialogue, what is the best for the police department and what is the best for community members and minorities in the community… It doesn’t mean that we are policing experts, but we are experts about life in the community.”

HAARC organizers are all hoping the survey will open a larger conversation about long-term police reform in the area.

“We want the survey to catalyze larger reforms down the line and large scale changes. However, when you’re working in a system such as this that we find ourselves [in], that doesn’t necessarily happen overnight,” McGee said. “Ultimately the goal is to have a clearer and more honest dialogue that holds police departments accountable in the Madison county area and New York state as a whole.”