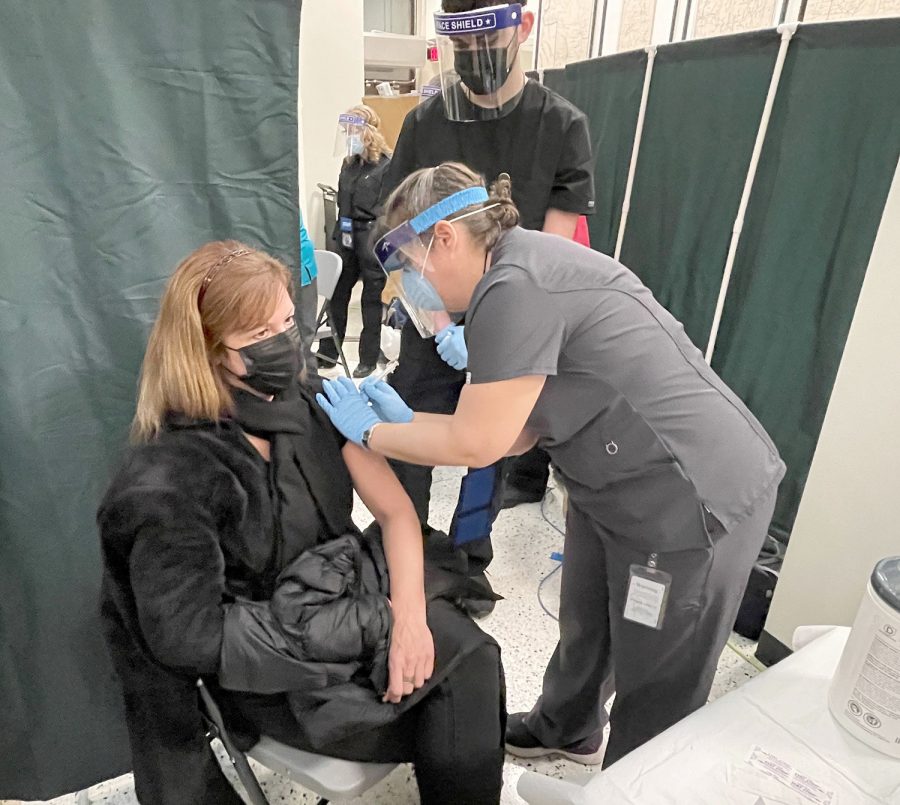 Lori Garris becomes one of the first Madison county residents to be vaccinated, recently receiving the Moderna vaccine.

The University will aid the state’s COVID-19 vaccine rollout by administering vaccines as a closed Point of Dispensing (POD), as Community Memorial Hospital (CMH) continues to administer vaccinations to community members.

Over 46,000 vaccines have been administered in Central New York, which includes Madison, Cayuga, Cortland, Onondaga and Oswego Counties. CMH spokespeople said the hospital’s first round of vaccinating hospital employees and medical staff went well, and that as of Jan. 12, over 135 people have been vaccinated in their second round of vaccinations, including all Colgate Student Health Services employees, some Colgate COVID-19 test administrators, Campus Safety officers and Counseling Center staff. The hospital is now working to administer the second dose for all individuals who have received their first vaccination shot.

As is the case across the country, vaccine distribution to Madison County has been unpredictable and haphazard, and there is growing concern in the county about vaccine shortages. Just a week ago, hundreds of appointments were cancelled at a Madison County vaccine clinic because of a missed shipment. The shortage is expected to worsen in New York this week, and Madison County has only received 100 doses, even though 1,500 doses were requested. LocalSYR.com reported that the county has the capacity to administer 3,000-5,000 doses a week, but has not been receiving the appropriate supply from the state to achieve this pace.

“Information becomes more available each day, and we continue to work with the Madison County Department of Health, community leaders as well as Colgate University on the preparation and execution of public vaccine distribution. We will share updates with the community once plans have been finalized,” CMH spokespeople said.

Colgate was approved by the New York State Department of Health last week to act as a closed POD once they are allocated vaccines by the state. The University found out last Wednesday that they can begin to pre-book vaccine allocations from the state, and once they are given vaccines, can begin to dispense them to Colgate community members. The CDC defines a POD as a location to administer a medical countermeasure, like a vaccine or antibiotic, to the public. Co-Chair of the Task Force on the Reopening of the Colgate Campus (Task Force) Paul McLoughlin said Colgate applied to the state to become two types of PODs: a closed POD, which serves only the Colgate community, and an open POD, which would serve the larger region.

Associate Vice President for Campus Safety and Task Force co-Chair Dan Gough said that Colgate could transition to being an open POD, which Task Force co-Chair Geoff Holm explained would come with significantly more risk considerations to avoid spreading the virus on campus.

“What we’re asking to do as a [POD] is to use our health resources to be able to facilitate that distribution because it seems, to me, like the issue has largely been, to this point, not a matter of vaccine availability but of actually getting vaccines into people’s arms,” Holm said, referring to reports that vaccines were being wasted in New York as a result of state regulations and unpredictable federal distribution. “So I think that if we’re allowed to become a [POD], that will help the actual mechanism of actually getting as many vaccines into peoples’ arms as possible.”

All of the protocol being followed for COVID-19 vaccine procedure is detailed in the University’s Medical Emergency Distribution System Plan [MEDS Plan], which was approved by the New York State and Madison County Departments of Health years ago.

Being a closed POD does not mean Colgate will have any control over vaccine distribution or that Colgate community members will have early access to vaccines, but rather that they will be authorized to administer vaccines once they are received from the state, following the New York state phased distribution program. When they begin acting as a closed POD, Colgate will request a certain number of vaccines each week from the state and find out later in the week, often on very short notice, how many they will actually receive.

Gough said that Colgate acting as a closed POD could, though, speed up the vaccination process for community members because they would not have to navigate the complicated and slow process of getting a vaccine at open PODs in the county, which are already flooded.

McLoughlin said Colgate also submitted other applications to the state to help with vaccine distribution, applying to be a storage facility for vaccines given the campus has appropriate refrigeration space for both FDA approved vaccines, the ​​​​Pfizer-BioNTech and Moderna vaccines.

Since in-person educators are now eligible to receive the vaccine beginning on Jan. 11 as part of phase 1b of vaccinations in New York, Director of Student Health Services Dr. Merrill Miller sent a survey to employees with initial information about vaccines and asked whether they will take the vaccine once it becomes available. Mcloughlin and Holm said the vaccine is not currently going to be required for employees, but that the University may change that in the future. The same process will occur with students at a later date, and the Task Force does not plan to make vaccines required for students either.

At current pace, phases 1a and 1b would take 14 weeks to complete, and the semester is only 15 weeks long. But as President Joe Biden has committed to speeding up the vaccine rollout, promising 100 million vaccines in his first 100 days and greater federal support, McLoughlin said it’s difficult to predict whether this pace will pick up in the coming weeks. Most students will be vaccinated in Phase 5, which includes healthy adults and children, but particular high risk students with underlying health conditions will be included in Phases 2 and 3, and essential workers will be included in Phase 4.

“What we’re doing is not waiting, we’re just planning as if we might learn tomorrow that all this vaccine is available. We want to be ready,” McLoughlin said.

Holm said he does not expect the vaccine to change the reopening plan significantly given this timeline, which he thinks may be disappointing to students. A significant part of the decision making will include research into whether the vaccine effectively prevents transmission of the virus, as the CDC continues to encourage vaccinated individuals to practice social distancing and wear masks since there is not enough information to prove vaccines do prevent transmission.

“It’s going to be a slower process than I think everyone would really like to have,” Holm said. “We are optimistic that the fall [2021] semester will resemble a much more normal type of experience for students than, certainly, we’re having at any point of this academic year. [It’s] too soon for this coming academic semester to say that there’s going to be any difference based on vaccinations, but hopefully as more people get vaccinated over the course of the year we will be able to shift to a different model.”

The University has hired additional staffing to prepare for the added stress vaccinations will cause the County and University, including 12 University contact tracers. Some of these individuals could eventually help with vaccination efforts as well should their contact tracing obligations allow for it.

“We’re actually seasoned veterans at doing this. In fact, when we did it for the meningitis, the state told us they thought we had set a state record for activating [the MEDS Plan] in the shortest amount of time that they were aware of, which was pretty neat,” Gough said.

Holm and CMH personnel also said that the hospital and Unviersity’s experience administering annual flu vaccinations will help facilitate administration of the COVID-19 vaccine. The most significant differences will be the double doses and the need to limit the risk of transmission at vaccination sites.